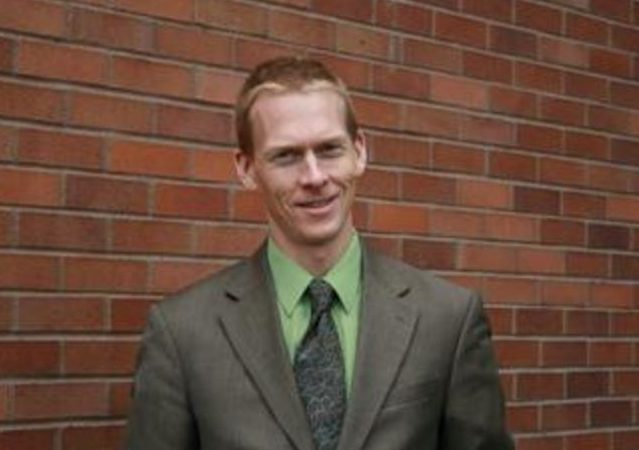 This is the article’s abstract:

For the last 100 years, Western colonialism has had a bad name. It is high time to question this orthodoxy. Western colonialism was, as a general rule, both objectively beneficial and subjectively legitimate in most of the places where it was found, using realistic measures of those concepts. The countries that embraced their colonial inheritance, by and large, did better than those that spurned it. Anti-colonial ideology imposed grave harms on subject peoples and continues to thwart sustained development and a fruitful encounter with modernity in many places. Colonialism can be recovered by weak and fragile states today in three ways: by reclaiming colonial modes of governance; by recolonising some areas; and by creating new Western colonies from scratch. 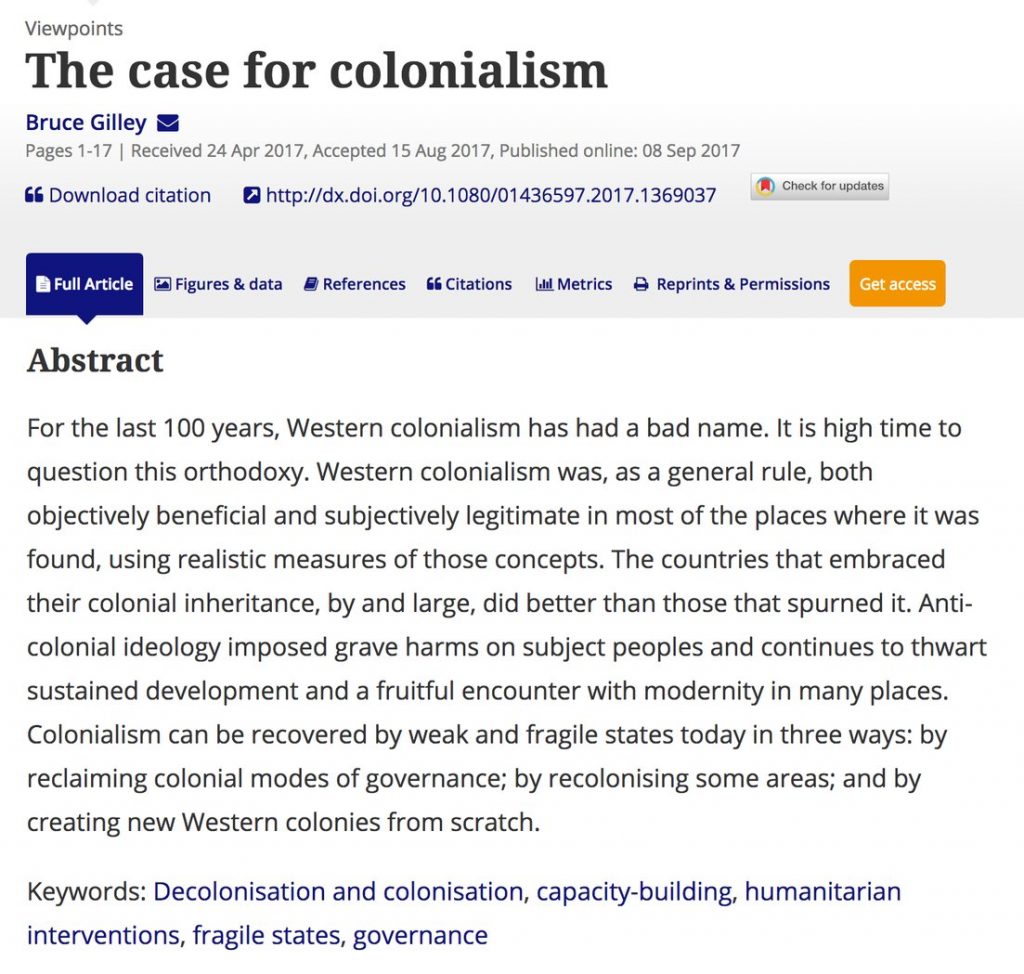 Protests, Calls for Retraction (and more), and Resignations

What ensued was a full-blown academic firestorm, which we covered in several prior posts:

Gilley’s critics were so outraged that they called for the article’s retraction, as well as for removal of the journal editors and a public apology. These demands were set out in two petitions (here and here), each garnering thousands of signatures.

Additionally, 15 of the Journal’s 34 member editorial board resigned in protest.

The journal initially stood behind the publication, releasing a statement on September 18th defending the decision to publish and calling for “serious responses” to the essay.

On September 21st, Gilley announced that he had asked to withdraw the article stating that he “regret[s] the pain and anger that it has caused for many people”. 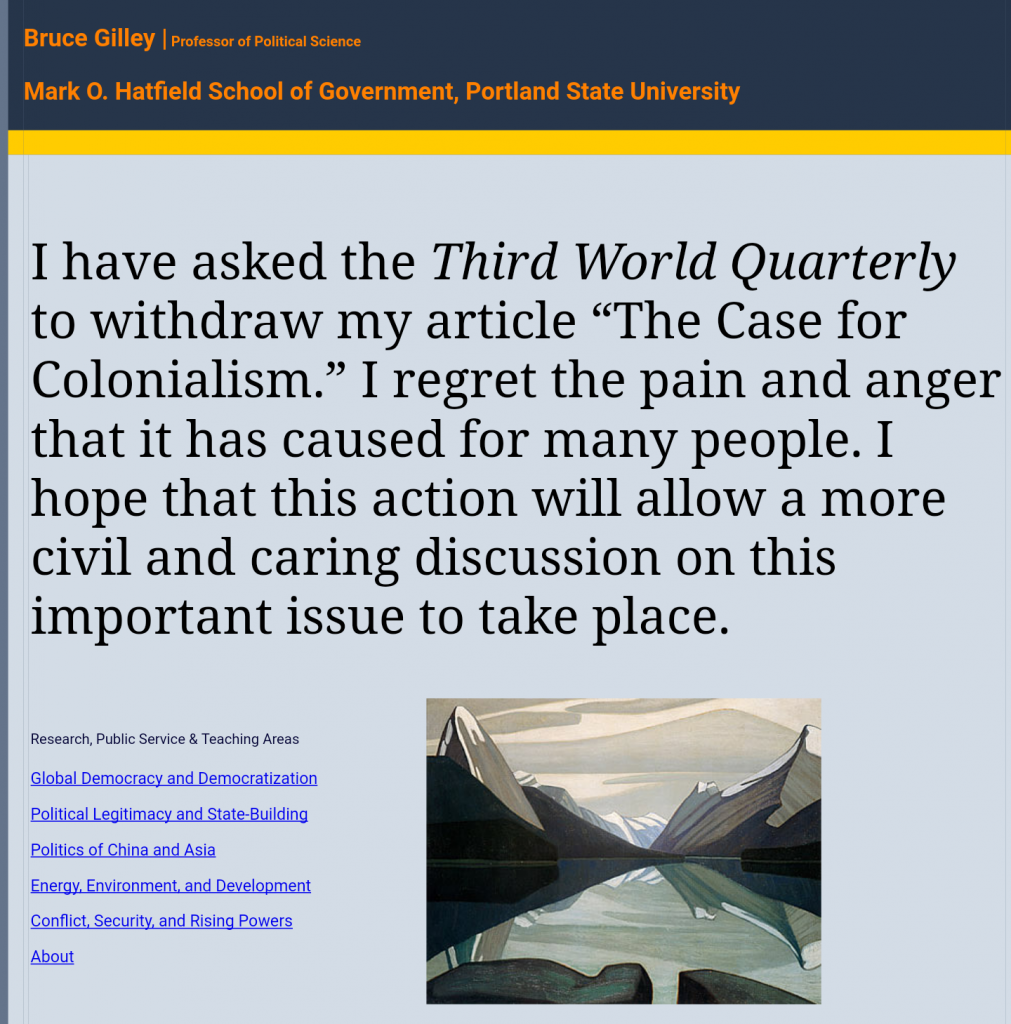 On September 26, the Journal released a statement elaborating the peer-review timeline of the article’s acceptance and publication as well as explaining why it cannot withdraw the article:

As journal publishers, we operate under the Committee on Publication Ethics (COPE) Code of Conduct. Among other things, COPE set out guidelines for situations in which a paper might be retracted. Peer-reviewed research articles cannot simply be withdrawn but must have grounds for retraction. These parameters exist in order to keep the scholarly record intact and so academic discourse cannot be shaped by any one opinion. Any request to change the scholarly record needs to follow a fair and transparent process, which is in line with these guidelines. As the publisher it is our role to treat this case as we would any other. On Thursday 21st September, the author contacted the journal’s editorial team, requesting the essay be withdrawn. In subsequent discussion with the author we have explained the above procedure and guidelines that we follow in all cases. As a result, the article remains online.

In publishing this essay, it was never our, or the Editor-in-Chief’s, intention to cause offence or to open academic discourse up to ‘click-bait’. We wholeheartedly apologize to those who have seen this as such but, as the publisher, we stand by the peer review process which led to this essay being published and defend the right of our academic journal editors and editorial boards to remain independent in their decision-making.

According to Peter Wood, in a piece at Minding the Campus, Gilley reportedly came to regret his retraction request, which was made under ‘onslaught’ and “in the hope of quieting a destructive tempest”.

Despite initially standing behind the decision to publish, the article has recently been removed from the journal’s website. The former link for the essay now contains this explanation:

This Viewpoint essay has been withdrawn at the request of the academic journal editor, and in agreement with the author of the essay. Following a number of complaints, Taylor & Francis conducted a thorough investigation into the peer review process on this article. Whilst this clearly demonstrated the essay had undergone double-blind peer review, in line with the journal’s editorial policy, the journal editor has subsequently received serious and credible threats of personal violence. These threats are linked to the publication of this essay. As the publisher, we must take this seriously. Taylor & Francis has a strong and supportive duty of care to all our academic editorial teams, and this is why we are withdrawing this essay. 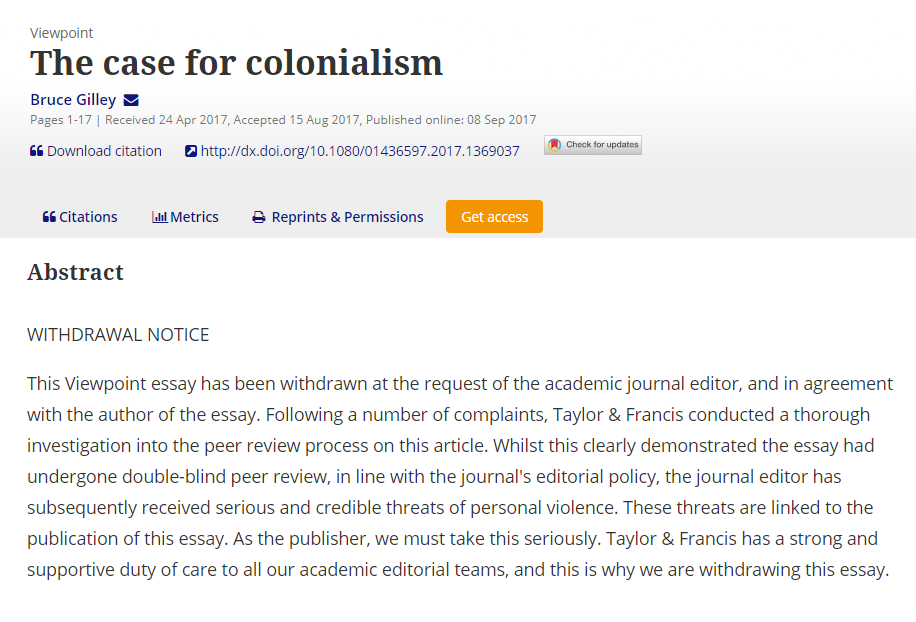 While the article is no longer online, we downloaded it, and you can read it here.

According to the Washington Post, the timing of the withdrawal may be linked to Columbus Day.

While the sources of the threats were not specified. the shrill tone of those protesting Gilley’s article, including calling Gilley a ‘white supremacist’ and demanding his termination and the revocation of his PhD, as well as calls for him to be “ostracized, publicly shamed and humiliated, and never ever called ‘a colleague’ who should be politely invited for a ‘civilised debate’,” made this escalation seem all too predictable.

In reporting this story, Inside Higher Ed cited several recent cases of death threats to academics, emanating from both extremes of the political spectrum. That list left out several high profile cases of threats against conservative scholars, such as Charles Murray and Allison Stanger at Middlebury and Heather MacDonald at Claremont McKenna). In none of these cases, as far as we can tell, was an academic’s written work actually censored due to these threats.

For that sort of thing, one would have to go back to the Norwegian Mohammad cartoons (censored by Yale) or perhaps to Salman Rushdie’s Satanic Verses.

In those cases, the threats could clearly be said to come from quarters hostile to academia. Can the same be said here?

The author is a graduate student who must write under a pseudonym for fear of retribution from faculty.

At some point the proper response to these types of threats becomes “Fuck you; bring it. I’m armed and will defend myself and my rights. Thank you, that is all.”

” death threats to academics, emanating from both extremes of the political spectrum”

Love to know the ratio of extreme left and right threats and even definition of right and left. What if Left threatens and Right criticizes? … both the same?

I hope Prof. Gilley can repeat this article elsewhere. I saw it about 10 days ago and loved it and knew the backlash would come. The Prof. now knows a universal truth when it comes to the totalitarian Left: The demon’s name is Legion for a reason.

Oh, if you live in freedom today, thank the British Empire:
https://www.prageru.com/courses/history/if-you-live-freedom-thank-british-empire

If you live in freedom today, thank the British Empire!

As a friend of mine used to say, screw ’em if they can’t take a joke.

He needs this coffee mug.

If “The author is a graduate student who must write under a pseudonym for fear of retribution from faculty,” perhaps Legal Insurrection should rework the URL where the compendium of his work is stored, to better disguise his name.

The problem with the author’s thesis isn’t that colonialism had good side-effects, it is the impetus for colonialism which is exploitation and dominance. Those attitudes are no longer popular in the West, so asking for a resurgence of colonialism is a waste of time.

Matt_SE: Only if you buy into the so-called post-modern interpretation of history, much of which is, quite frankly, rubbish. There were a variety of factors in the impetus for colonialism–and they go back thousands of years.

And if you think there’s no impetus for a modern-day colonialism, you must have missed all the globalist developments since the end of the Cold War.

Colonial powers didn’t set out to improve the world, they set out to pillage it. But it happened that the rest of the world was so backwards that it ended up being helped anyway.

Everywhere you look, self-interest was the motive: the Spanish in Central America, the British in India, the Belgians in the Congo, the French in the Middle East, the Portuguese in Brazil. The list goes on and on and on.

The only semblance of goodwill might be the expansion of religion, but even that probably had selfish motives for the Church.

If you’d like to argue that it was all motivated by altruism instead, feel free.

I fail to see how intentions are relevant. If the side effects were mostly good and according to studies colonies ended up better off than non-colonies it doesn’t really matter what the intentions were. Intentions are usually only brought up by the left when their policies end up going horribly wrong.

“ostracized, publicly shamed and humiliated, and never ever called ‘a colleague’ who should be politely invited for a ‘civilised debate’”

Right, that’s the way to handle a challenging idea. Sure.

Expecting intellectually honest and respectable work from academia is about as realistic as expecting sound scientific work from the Scientologists.

Sorry, that’s just the way it is.

I’m wondering if the same level of outrage would manifest itself if the Magazine had published an article extolling the ‘virtues’ of colonialist Socialism in Cambodia, Venezuela and Angola …

The Thugs’ veto strikes once again.

This new leftist concept of speech=violence, thereby justifying violence and threats of violence to speech they don’t like is going to eventually backfire on them. They don’t care now that they feel they actually run the institutions, but eventually the worm turns.

Just imagine the shoe being on the other foot and Universities being told:

“Look, Communism has killed over 100 million people, Karl Marx’s Communist Manifesto is therefore clearly violent speech, so any professor teaching it is clearly enabling and inspiring mass murder. If you continue to teach this violence at your university . . . . . . well, it’s a lovely university you’ve got here, too bad if something were to happen to it.”

The Leftists’ tolerating, permitting, often encouraging from the sidelines, and acquiescing to this speech=violence shtick is not going to end well.

Hey!
This is Portland, Oregon; or what it’s become.

It’s come to this: Western academic papers available only by samizdat. I guess it makes sense, though.

Any place that has enough Communists, like Western academia, sooner or later needs samizdat.

Well, I’m the right wing fanatic your mother warned you about, I’m armed to the teeth, I detest academia, and I’ve never threatened anybody. I would be pleased to protect the prof and the journal from harm though.

I wouldn’t dream of suggesting that someone make “credible threats of personal violence” against the editors unless the article is put back up.

But does anyone have a working link to the original article?

The fact Bruce Gilley apologised for his wrong-think means I have very limited sympathy for him. The correct response is “publish your own academic rebuttal or STFU.”

A shame Gilley retreated. The benefits of much colonialism — especially British — to colonized areas or countries has been noted before now. I am but one of those noters, but also, with original-Gilley, a proponent, especially in re MENA, as one vector for quieting the joint: http://theological-geography.net/?s=colonize

The Left wants to rule by physical intimidation. That’s the way of all major tyrants from Muhammad to the monstrous 20th century dictators.
Gilley should not be surrendering, perhaps just hoping to protect himself. What if every threatened person and institution were to caved in to threats?

” I hope that this action will allow a more civil and caring discussion on this important issue to take place. ”

Dumb, how is that going to happen when you just fearfully caved in? You just gave positive reinforcement for physical intimidation.