The Golden State’s war on the White House now strikes the national border.

“No one gets to ignore the laws. Not even the president of the United States,” Becerra said. “The border between the U.S. and Mexico spans some 2,000 miles. The list of laws violated by the president’s administration in order to build his campaign wall is almost as long.”

He said the project involves the improper waiver of 37 federal statutes, many aimed at protecting the environment.

When environmental laws were put in place, they were designed to prevent the pollution of our air, protect our waterways from contamination, and ensure hazardous waste was properly and safety discarded. The over-reach of California’s politicians in using environmental measures, however, should have been anticipated: The tactics come straight out of the progressive policy handbook.

The good news is that our politicians may be the North Korea of lawfare tactics.

…At issue is a 2005 law that gave the Homeland Security secretary broad powers to waive dozens of laws for border barriers, including the National Environmental Policy Act, Clean Air Act and Endangered Species Act.

The Trump administration has issued two waivers since August, both in California. President George W. Bush’s administration issued the previous five waivers in 2008.

Legal challenges to border barriers have failed over the years amid concerns about national security. The Congressional Research Service said in a report this year for members of Congress that it saw no legal impediment to Trump’s proposed wall if deemed appropriate for controlling the border.

Becerra had an opportunity to chat with U.S. Attorney General Jeff Sessions about the lawsuit.

Asked about the lawsuits, Sessions said the U.S. government has a responsibility to secure the border.

“We would expect to be fully successful in moving forward with our border wall as Congress gives us the money to do so,” Sessions said.

…Becerra’s legal action is the latest in a series of suits he has filed against the administration. He recently sued over Trump’s decision to halt a program in six months that protects young immigrants from deportation.

I am reminded that when the state of Arizona developed practical rules to actually enforce federal immigration law under then Governor Jan Brewer, it got into trouble because it went against Obama-administrations open-borders policy. When Arizona’s Senate Bill 1070 was partially stuck down by the U.S. Supreme Court, Becerra had this to say:

Democratic Congressman Xavier Becerra (D-LA) told KPCC that he is worried about how the law might affect someone like his father, who speaks English with an accent and “certainly looks like he might be … from Latin America.”

“What happens if he goes out and drives and forgets his driver’s license?” asked Becerra. “Do we have to go pick him up from an INS detention center?

Becerra is nothing if not consistent…consistently self-centered.

I would like to second Zerohedge’s proposal for a revised border wall plan: 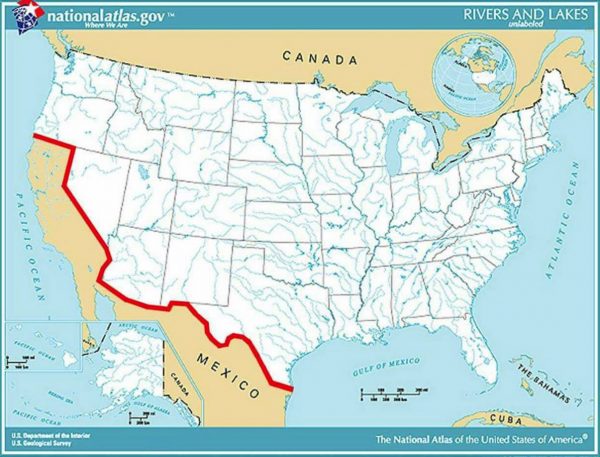 To be a self-professed deal guru, Trump is doing a poor job of recognizing what cards he holds and how to play them against the leftist states, their governors, and their legislators at the state and federal level. California, OR, WA, CO, and NV are flagrant and willful violations of some of the most onerous and punitive federal laws on the books, specifically the controlled substance laws and attendant laws against related matters such as money laundering, and the tools available, such as the RICO Act, civil forfeiture, and criminal forfeiture, civil declaratory judgment actions, injunctions, and extraordinary writs.

Trump has an arsenal at his disposal and an AG that has demonstrated a predisposition to use them against marijuana. In other words, Trump has those states and many persons, on the state payroll and in the private sector, by the balls. The choate laws and conspiracy laws, the misprision of many felonies, and the civil tools would allow Trump to sit them down with the most fierce of the fierce in the USDOJ and give them a vision of what scorched earth, bloody knuckle, barefisted politics is and what price those states and people will pay in treasure and penal time. Trump is therefore in a position to make them do anything he wants and pursue his own political agenda with great vigor.

But is anyone around him smart enough to understand that he holds the cudgel?

Spare me the crocodile tears darling. There is no dealing with people who hate you (as the Jews have found out repeatedly).

California is all in on the War against Trump and no amount of rational discourse or no number of fantastic ideas that will improve the lives of all Americans will change their stance against him.

These guys are so ideologically committed to battle Trump that even if Trump came out and said he would EO California out of the Union they would sue him to stay in! 🙂

There is no dealing with crazy when it comes to the brain dead zombies who run California.

Were you responding to me about “crocodile tears” or someone else? Because it is an extremely obtuse riposte to what I said.

…Except for the minor detail that the Federal government has no constitutional basis for controlling narcotics. Recall that it took a constitutional amendment to outlaw alcohol. States have that power, but not the Feds.

We are on stronger ground when it comes to the borders. In fact Trump has already issued the waivers.

I don’t pretend to know everything that’s going on, but I do understand it’s a complex situation.

The Trump administration, if it obtains a negative ruling from the 9th circuit, will likely appeal. They’ll have better luck with the SCOTUS.

I thought California had hired Eric Holder to sue the Trump Administration?

Didn’t they already try this? Something about The Wall interfering with avian migration patterns.

I think that was ‘wind turbines’ but they were designed to save the planet, so a few California Eagles are a small price.

Since the Bald Eagle was taken off the Endangered Species Act, there has been little to draw attention to a list dominated by mice and voles.

This will End California……..

San Jose Mercury News reports San Francisco and Oakland have filed suit against “Big Oil” to fore them to pay for reinforcing structures against rising sea levels allegedly caused by the burning of fossil fuels. This is the lawsuit suit Kamala was begging for as CA AG, along with AGs of other states. I, for one, welcome this suit.

As previously reported in LI, Kamala and others have been proponents of legislation that would criminalize or otherwise impose sanctions or civil penalties on the publication of research, data or other commentary that contradicts the “settled science” of AGW.

This suit gives the targeted energy companies s platform free from political influence and with full first amendment protection inside a courtroom to present any and all evidence which contravenes AGW, which presupposes climate as a static system, and introduce evidence of all natural occurrences which influence a dynamically changing climate.

California is suing “Big Oil” for “wrongful advancement of civilization.”

You are mistaken in your presumption for several reasons:

The litigation will take place in the Ninth Circuit, and the judges in that circuit have never allowed the law to get in the way of advancing their leftist agenda.

The holding in Daubert was supposed to be consistent with the “liberal thrust of the rules evidence” and supersede the antiquated “generally accepted” rule of Fry, but has resulted in the exclusion of more evidence than the Frye rule ever could.

Kennedy went along with the leftists in Massachusetts vs. EPA. The litigation was all about the agenda, not the science or law.

Is California colluding with Mexico in order to disenfranchise American citizens and compensate for Catastrophic Anthropogenic Planned Parenthood (CAPP)?

No, they’re just that stupid. I don’t doubt many of them believe the crap they’re shoveling.

I’d be perfectly happy to include entire California’s eastern border in the wall plan.

Exactly. Include California in land that is South of the wall. Problem solved.

That Exxon-Knew lawsuit may have the same problem as this ‘Wall’ suit .. is it ‘ripe’ ?

As far as I know Trump has gotten no new funds so there is nothing to sue.
The ‘Exxon-Knew’ AGW suit didn’t have any impact until 2050, the judge said if they can’t find anything else to come back in 2045.

I’d change Zerohedge’s line to only include L.A., S.F and a few other coastal liberal hotspots. Only getting rid of enough liberal hellholes to change Cali to red.
I’d also exclude the ports and have a narrow corridor to run non EPA approved diesel trucks along that corridor burning the smelliest stuff possible.
Still too many good folks in California we need to keep rather than toss out with the liberals.

I wonder if the US judicial; system will actually follow the language of the constitution:

“In all Cases affecting Ambassadors, other public Ministers and Consuls, and those in which a State shall be Party, the supreme Court shall have original Jurisdiction. In all the other Cases before mentioned, the supreme Court shall have appellate Jurisdiction, both as to Law and Fact, with such Exceptions, and under such Regulations as the Congress shall make.} US Constitution; Article III, Section 2, clause 2.

This case, along with every other case in which a State is a party, not only should, but MUST be heard in the SCOTUS. all the cases where states sued the Executive branch of the federal government should also have been heard, originally, in the SCOTUS by-passing all lower courts.

How much of their taxpayers’ money are they willing to throw at litigious windmill tilting?

He said the project involves the improper waiver of 37 federal statutes, many aimed at protecting the environment.

Well, sure—we wouldn’t want to turn that area into a desert, or anything.

I’m trying to think of the downside to Kim’s hitting Los Angeles with one of his small but deliverable nuclear warheads. That would give us grounds to annihilate the regime and set an example. It would also be poetic justice for ten to a hundred thousand of the anti-Americans voting in the Los Angeles basin.

Hm. Still trying to think of the downside here.

As a resident of CA as you are, Leslie, I think Zerohedge’s proposal to include CA behind the wall (after we get out) may be the only answer now. Gov. Brown, on his own, without consulting the U.S. State Dept., is independently negotiating trade deals with China. CA is suing the U.S. legislature over bills that include the border wall, the US. Justice Dept. over its cessation of funding for sanctuary cities, and over several other measures designed to improve the lot of all Americans. CA’s far-left-wing politicians who now dominate the whole state have decided CA is no longer a part of the USA. Good riddance!!