Wildfires are destroying huge swaths of Montana and Idaho

Wildfires are destroying huge swaths of Montana and Idaho

More than half a million acres affected in Montana alone 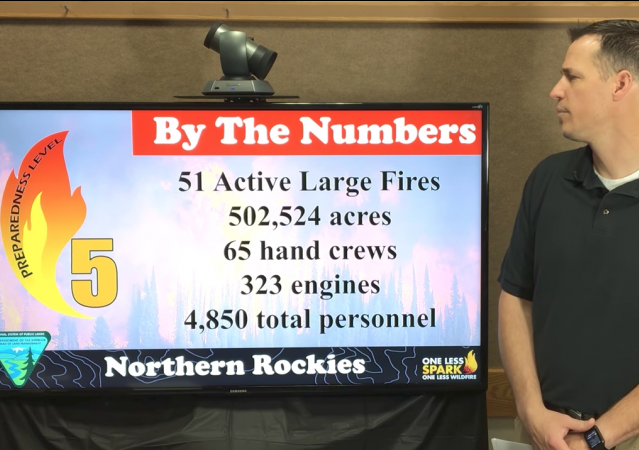 Texas’ Gulf Coast isn’t the only part of the country being ripped apart by a natural disaster. More than half a million acres of Montana and part of Idaho are being destroyed by wildfires.

To give you an idea of how widespread the current devastation is:

Neighborhoods have been evacuated and the Red Cross set up shelters as fires continued to consume thousands of acres, causing air quality to rapidly deteriorate.

Synoptic winds, National Weather Service meteorologist Luke Robinson called them Sunday. “That’s the fancy word for it,” said Robinson. Also the polite term, given the havoc wreaked by the flames.

“Nothing, absolutely nothing, about the conditions out there are working in our favor today,” said Larry Bickel, public information officer for the Lolo Peak fire.

Near Arlee, 16 firefighters found themselves trapped between the Liberty fire and a spot fire Saturday. All escaped safely. East of Eureka, the Caribou fire doubled in size during a 4-mile run Saturday, burning “an unknown number” of structures and forced a full evacuation of the West Kootenai area.

Glacier National Park closed part of the Going-to-the-Sun Road on Sunday, evacuated the area around the Lake McDonald Lodge, and started removing historic artifacts from the lodge itself — all because of the Sprague fire, which last week destroyed the park’s century-old backcountry Sperry Chalet.

The Rice Ridge fire outside Seeley Lake grew by more than 15,000 acres, and saw new evacuation orders and warnings issued Sunday in Powell County. And the Lincoln County Sheriff’s Office issued a mandatory evacuation notice Sunday for people living near the West Fork fire near Libby.

Seemingly every few hours Saturday night and Sunday, the Red Cross sent out a new notice about the opening of another shelter for evacuees. (See accompanying list.)

And, for a time on Saturday, not a single air quality monitor in the entire state of Montana registered Good air.

Thankfully, it looks as though the eastern fires are being successfully contained.

I hope the cedars survive the fire.

Mostly, at least here in NW MT (and N ID), it isn’t as much cedars, as Ponderosa Pines. Very big ones – we have a couple that are maybe 100 foot tall. Maybe twice the size I was used to Inc CO.

Fire is a natural part of the American forest ecosystem. Leftist and cultist environmentalist ignoramuses are not.

Smaller forest fires have to be allowed to burn, otherwise lest there be megafires when they finally ignite.

From the BBC, no less:
“Evolution has adapted plants and animals in fire-prone ecosystems to cope with fires and to rebound vibrantly afterwards. Animals, from insects to birds and mammals, are usually able to survive wildfires too, by running, flying or burrowing out of danger. As soon as the vegetation returns, so does the wildlife. The soft, young grass stems attract grazing herbivores from surrounding areas and allow the grassland ecosystem to rapidly regenerate. Without fires these grasslands would slowly turn into forest through a process known as succession. Trees can ultimately outcompete grasses when conditions are stable, but frequent fires create an environment in which grasses have the upper hand: slow-growing tree saplings are destroyed before they can really establish themselves. some forests are fire-adapted, too. Pine trees in the Ponderosa forests found across the western United States and Canada have thick, heat-resistant bark to protect the living tissues inside from rising temperatures. They also naturally drop their lower branches to prevent fire catching into the canopy…”
http://www.bbc.com/earth/story/20160722-why-we-should-let-raging-wildfires-burn

Most of America is grassland. The natural state of things is for trees to grow tall, and grass to grow short. This is accomplished in the ecosystem by lightening starting grass fires that don’t affect trees, and do kill harmful insects.

Another part of the American ecosystem just might be the likes North Korea blowing up Washington DC when Trump is out of town, and ridding the city of most of the parasites infesting it.

what they said… SoCal is the same way: the chaparral NEEDS to burn every few years.

but we’re too stupid to let that happen, so, instead, we get devastating fire storms that destroy everything.

All I know is I’m choking to death on smoke here in N. Idaho.

Earlier today drove through N ID on the way home in NW MT from the Spokane airport. Airport wasn’t bad, and sky was almost blue to the west. But was increasingly gray as we drove east. Friend of ours in ID sent us pictures. No surprise – it was just as bad on our side of the pass.

Most of the fires in Montana and elsewhere are due to extremely poor timber management i.e. shutting down the logging and other forest cleaning methods. Most of the trees which have been effected are stands due to pine beetle infestations. These dead trees are the main fuel for these wildfire, not grass. When a fire hits these, they go up like gasoline. If these trees had been logged out, there would no fuel for these huge fires.

Not sure how much of it is pine beetle. Saw far more of that with the lodgepole pine in CO. But the forest mismanagement point is very accurate. We used to have 3 lumber companies in town, but now have just one. And this is the 2nd year in the row that we have had a fire close to town make the national news. Guy at the dump Sat told he that he hunted elk up by where the new fire is, and the underbrush and fallen timber was so bad that it was almost impossible to get through it. And that is what gets the huge Ponderosa burning, and when they go, it is extremely hard to stop. They have thick bark that keeps them from burning in smaller fires. They evolved to survive smaller fires every several decades burning the underbrush and smaller trees. But the Feds has been controlling the burning for better than a century now, which means a century of fuel on the ground in many places. Add in the FS discontinuing timbering several decades ago, and the forests are ready to burn. (Which, you can blame urban environmental activists for, who don’t have to live anywhere near the places burning as a result of their horrible policies).

Thanks you for covering the forgotten state of Montana. We are getting burned and choked out here in Lincoln County, and there is little to no attention to this.
It’s a shame we aren’t allowed to log our own communities anymore. The severity of this situation could have been lessened.

Ditto. Next county south of you.

At least tonight at midnight, we seem to have the distinction of having the worst air quality in MT, comparable to Sandpoint, ID yesterday, rated worst then in the country. Rated “Hazardous”, we have had roughly a steady 400 “PM2.5 NowCast Concentration” level of particulates since about the time we got back from Spokane yesterday afternoon (was rated only mildly unhealthy yesterday morning).

We appear to have better than a half dozen fires w/I a 20 mile radius, with not all of them being reported yet, and of those, not all are being worked.

How long before the climate cultists start droning on about how these fires are worse because of man made climate change?

Where have you been?

“How climate change is increasing forest fires around the world:”
http://www.dw.com/en/how-climate-change-is-increasing-forest-fires-around-the-world/a-19465490

That article is a microcosm of everything going wrong with environmental management today. Enviro-leftists impose wrong-headed and unworkable plans, plans which guarantee long term disaster (such as banning logging) Then, when the disaster THEY created happens, they claim it is “justification” for a whole new set of disastrous plans based on same made theology that they all adhere to, and they have fainting spells and start shrieking uncontrollably if anyone questions their dogma, much less their results.

The jihadis in Israel start many fires.

They will here, too. Arson is too good a weapon for terrorists not to exploit. And the liberal mismanagement of our forests makes them excellent targets for multi-state megafires one can start with a single match.

The silver lining: after the burn, a megafire fuel source will be gone – until liberal mismanagement of the forests lets it all grow again.

Conservatives: only you can prevent megafires – and GOPe rats occupying office.