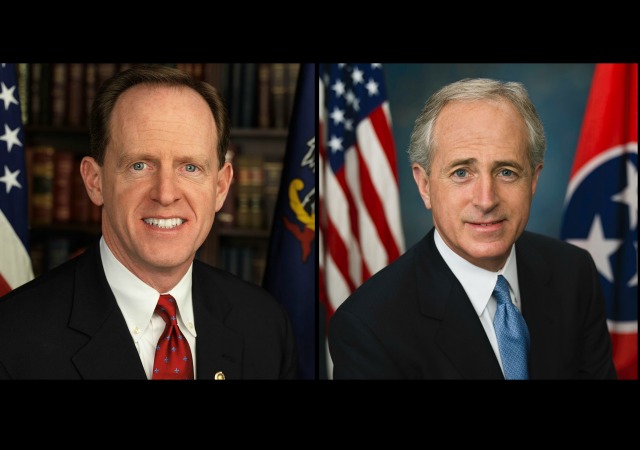 Sens. Pat Toomey (R-PA) and Bob Corker (R-TN), two members with opposing views on fiscal policy, have announced “a path forward on tax reform” that “would allow for a tax reduction, as scored on a statistic basis, over a 10-year period.” They hope to Senate Budget Committee will vote on said plan next week.

The senators did not release any details about the plan, but new outlets have stated it will allow tax reductions up to $1.5 trillion. The Wall Street Journal reported that the “agreement would allow Republicans to lower tax rates while making fewer tough decisions on what tax breaks to eliminate to help pay for the cuts.”

“I am strongly committed to pro-growth tax reform that will lead to more jobs and higher wages and was glad to work with Chairman Enzi and Senator Toomey at the request of Senate leadership to reach an agreement that will allow the committees of jurisdiction to begin their work to craft this important legislation,” said Corker. “While each member of the caucus will have to make their own decision, I believe our agreement gives the tax writing committees enough headroom to achieve real tax reform that eliminates loopholes and lowers tax rates for hardworking Americans. I will be watching closely as the tax reform legislation is drafted, and ultimately, my support will be contingent on a final package that generates significant economic growth and does not worsen but hopefully improves our fiscal situation.”

“I am confident the budget agreement I have reached with Chairman Enzi and Senator Corker will give the Finance Committee the headroom needed to write a pro-growth tax plan that reforms the code, causes the economy to surge, and ultimately results in reduced federal budget deficits,” said Toomey.

As I mentioned, Toomey and Corker are on opposite sides of fiscal policy. The fact that they have come together in an agreement has given some GOP senators a glimmer of hope. From The Hill:

“Corker and Toomey probably represent the far end of the spectrum within our conference of what they want to see that look like, and the fact that they’re getting together leads me to believe that we’re close to getting a budget that they can put out of committee and we can consider on the floor,” said Sen. John Thune (S.D.), the No. 3 Senate Republican.

The Financial Times explained how the compromise will remove a hurdle for the Senate Republicans:

The compromise between Mr Toomey, who has been willing to countenance steeper cuts than the more fiscally conservative Mr Corker, should permit the Senate to move towards a budget resolution. This will be needed to allow so-called reconciliation instructions in the Senate, which would allow Republicans to cut taxes without being stymied by the Democratic filibuster.

The move clears a procedural hurdle and makes it clear that the Republicans are ready to slash taxes without fully making up the losses through revenue-raising reforms over a 10-year window. Going down this route under reconciliation will potentially require the party to agree to terminate some of the tax cuts before the decade-long window is ended.

The Senate rules state that “legislation cannot add to the long-term deficit if it is to pass under reconciliation rules.” If it does, then the “tax cuts may have to be temporary.”

If the Senate votes on the budget, the lawmakers would then have to “align it with the House budget that came out of committee in July.” The Wall Street Journal continued:

As written, the House budget likely doesn’t allow for as large a tax cut as the Toomey-Corker pact and is tied to more than $200 billion in cuts. Those gaps will require a House-Senate negotiation.

Then, using the size of the tax cut in the budget as the maximum, the House and Senate would each write their own tax bills. Those measures are likely to diverge from each other and force lawmakers into the trade-off debates and lobbying fights that have prevented a major rewrite of the tax code since 1986.

What’s the over-under on a death tax surviving as the political football every GOP politician uses to get elected, but never does anything about?

We can only hope…with skeptical side eye.

Here are the Left/Democrat arguments against this tax cut:
1 – How will we pay for it/Can’t afford it.
2 – It is a tax break for the rich.
3 – It puts a burden on the lower classes.
4 – Republicans want to starve children/the poor/students/Hollywood stars.

5. Representative Nancy Pelosi has many years experience managing large budgets so she knows better how to spend your money than you do.

That they can do. Well, it will be effective if they can combine it with reconciliation, rehabilitation, and revitalization.

I keep wondering what happened to the “T-rump plan”…that T-rump didn’t write and could not comprehend? You know, the one from the campaign…that foolish people (who should have known better) on the right vaunted?

Odd that I’m not seeing it…

This is known as strategy. The Trump administration will allow the Congress to come up with a tax cut plan. It will allow this to occur in a vacuum, as no budget has yet been presented. Whatever the House and Senate come up with, will be a CONGRESSIONAL tax plan. Trump may or may not except it. He will use the administration tax plan as leverage to gain Congressional concessions.

The Trump administration is not stupid. The Congress does not want to change the status quo, in any regard, and most especially in a manner which might benefit Trump. Trump got stuck with the blame for Ryancare because he naively supported the ONLY thing to pass either house of Congress. So, do not look for the WH to release any plan which the media and the rest of the establishment will use to club him over the head. It is not the President’s responsibility to write legislation. That responsibility belongs to Congress. And, they can eat the results of their action or inaction.

So, two senators with diametrically opposing opinions on fiscal policy announce a tax reform plan with no details whatsoever. It could hold details from one end of the spectrum described by their polarity to the other.

Methinks this is done on purpose, a sort of tabula rasa upon which each may fill in with their best hopes. Me also thinks it shows how out of touch DC politicians are with the citizenry, because the people understandably hold little trust in them. In fact, faced with such a vague, undetailed plan, most citizens now fill in the tabula rasa with their worst fears and fully warranted suspicions.

Deeds, not words. Because the word of any member of Congress regardless of which branch of the Uniparty they belong to is absolutely worthless.

Corker is especially not to be trusted. As I recall he’s the twit who made Obama’s shady Iran deal possible by coming up with a scheme for the Senate to illegalky delegate its treaty approval power to the natural-boen British East African.

You’d think the entire R delegation to Congress would be able to unite around a simple repeal of Obama’s 2013 trillion dollar tax hike.

These two are just slightly less squishy than McCain and Graham. Both brag how conservative they are while campaigning, but waver all over as soon as the election has installed them for another 6 years. They need to change their terms to 3 years.

Over the years the Federal government has been footing more and more of the cost to govern the USA; the states less. It is done because the Federal government has unlimited borrowing capacity and can print money. In the long term it is ruinous for the country but no one cares; it is in the future and we won’t be here to pay for it while at the same time politicians and others claim they care about the future. To fix this the feds should push the much more of the burden onto the states which, for the most part, must have balanced budgets and cannot print money. The closer the cost of government is to the people the more responsible the budget.