Statue of St. Junipero Serra appears to have been vandalized

Statue of St. Junipero Serra appears to have been vandalized 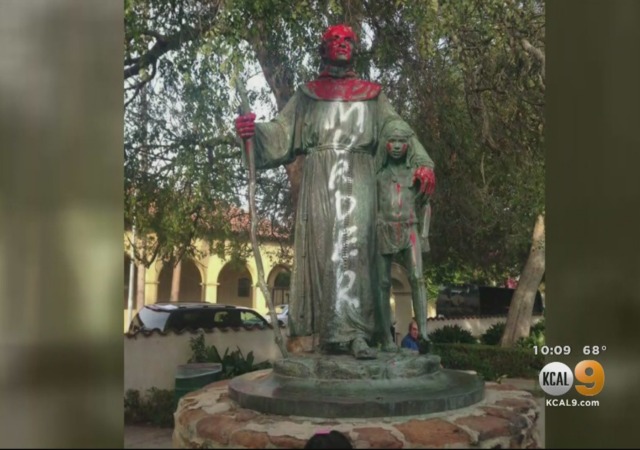 Monuments to Confederate soldiers aren’t the only memorials being target by social justice vandals.

Not only was a statue of St. Joan of Arc in New Orleans tagged with “Tear it Down” graffiti, a sculpture of another Catholic state looks as if it has been the target of vandalism this week.

Several people stopped by a statue of Father Junipero Serra in a park across from Mission San Fernando on Thursday after a photo made the rounds on social media appearing to show the statue had been vandalized.

A picture circulating Facebook showed the statue spray-painted red and the word “murder” written on Serra in white.

While city officials would not confirm the authenticity of the photo or the clean-up, CBS2 reporter Crystal Cruz saw red paint on Serra’s arm and a swastika on the statue of the child standing next to him.

“Everyone’s entitled to their own public opinions and thoughts,” said Cristian Mendoza. “But once it gets to this level I don’t think it’s right.”

This is not the first time a statue of St. Junipero was attacked. Shortly after Pope Francis elevated Father Junipero Serra to sainthood in 2015, vandals hit the Carmel Mission where the remains of the saint are buried, damaging statues and gravesites during their rampage.

The vandals, who police say acted sometime Saturday night or early Sunday morning, splashed paint throughout the cemetery and basilica and scrawled “Saint of Genocide” on a headstone.

Carmel police Sgt. Luke Powell said the incident was being investigated as a hate crime because the vandals targeted “specifically the headstones of people of European descent, and not Native American descent.”

However, this week’s red paint and swastika appear to be classic examples of the social justice outrage art craze sweeping nation and not a reference to Serra’s personal history.

“social justice outrage art craze” – latent anti-Catholicism come to the fore? Or, ISIS-inspired activity by Muslims or Muslim-sympathizers? Or, random vandalism attaching itself to the unrest of our time? Or, persons against Christianity in general and the Catholic statues are handy targets?

The statue of Lenin is still (intact, admired, venerated) in Seattle.

Evidently, Seattle Mayor Ed Murray has called for it to be taken down. However, he has also called for the removal of a “monument to Confederate soldiers at Capitol Hill’s Lake View Cemetery.” From a cemetery? He says “they represent ‘historic injustices’ and are symbols of hate, racism and violence.”

So, the major equates soldiers who fought for the confederacy, yet returned to lives of, I’m guessing for the most part, useful citizens with someone who would overthrow America in a heartbeat.

Can’t speak to the authenticity but 8Chan has doxxed antifa, in a link and on youtube, which will probably be quickly taken down.

Well, they are right, but centuries late. They are also projecting.

Wonder when they will start attacking artworks in galleries?

Perhaps the portrait of Bill Clinton should be removed from the Presidential portrait gallery be cause of his sympathetic views towards the confederacy. As governor of Arkansas he signed state legislation authorizing an additional star be added to the state flag to recognize the confederacy and Arkansas’ connection to it. Then there also is the 1992 Clinton-Gore campaign button.

Outside of the US many works of art and architecturally significant buildings have been attacked intentionally (collateral damage due to military action is excluded). The goal is not to merely defeat a domestic foe, but to obliterate his culture.
The current campaign in the US has the goal of destroying the Constitution by means other than the amendment process (which the left lacks to numbers to do).

The headline reads “appears to be vandalized”. What, you think the statue was made that way? Media is sooo afraid to appear judgmental – left or right.

In 2002, five men allegedly connected to Al Qaeda were planning to blow up the 14th century Basilica di San Petronio in Bologna, IT, and were arrested. Again in 2006, plans by Muslim terrorists to destroy the Basilica were thwarted by Italian police. The terrorists claimed that a 15th-century fresco inside was insulting to Islam. The fresco, painted by Giovanni da Modena, depicts Muhammad in Hell being devoured by demons

Meanwhile, down in Texas they are going after Christopher Columbus.
https://www.click2houston.com/news/christopher-columbus-statue-vandalized-in-bell-park