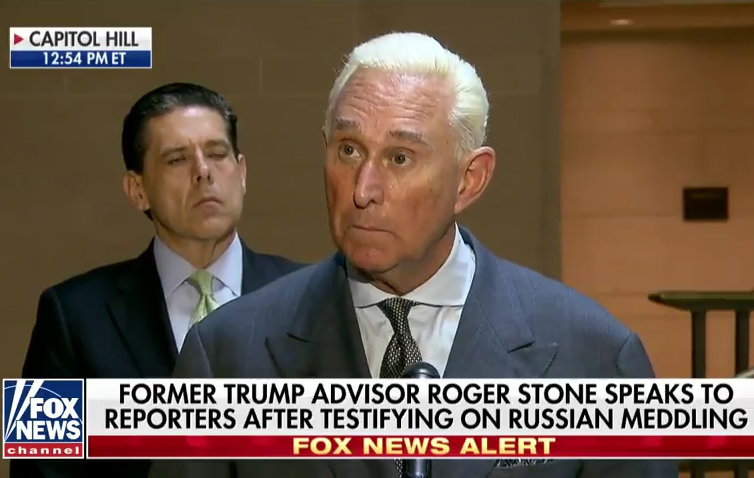 Roger Stone, an ally of and unofficial campaign adviser of President Trump, testified Tuesday in a closed hearing of the House Intelligence Committee.  Though Stone requested an open hearing, it was at the Committee’s insistence that the interview be closed.

This is the latest in the efforts of Congress to root out alleged collusion between Russia and the Trump campaign and/or Trump associates.

Stone was called to testify because he had a private Twitter conversation with infamous hacker Guccifer 2.0.

Stone told Business Insider in March that he had a private conversation on Twitter with the person, nicknamed “Guccifer 2.0,” and that the interaction was so “brief and banal, I had forgotten it.”

“Not exactly 007 stuff even if Gruccifer 2.0 [sic] was working for the Russkies,” Stone said. “Meaningless.”

In his opening statement to the committee, which was leaked Monday night, Stone cast doubt on the intelligence community’s assessment that Guccifer 2.0 was a front for Russian intelligence.

He pointed to a report written by Veteran Intelligence Professionals for Sanity (VIPS), publicized by The Nation in August, claiming that the theft of DNC emails was not a hack, but a leak.

“Now that more information is in the public domain, the very question of whether Guccifer 2.0 hacked the DNC must be revisited in light of the VIPS report cited by The Nation,” he said.

After his testimony, Stone told reporters that he believed the DNC hack was an “inside job,” pointing again to the report in The Nation.

On Monday night, Stone released a statement in which he denies any collusion with Russians and notes that there is “not one shred of evidence” that he or anyone on the Trump campaign did so.

He also released the private Twitter messages between himself and Guccifer 2.0

[O]n Monday night, [Stone] defended himself in a lengthy statement.

“While some may label me a dirty trickster, the members of this committee could not point to any tactic that is outside the accepted norms of what political strategists and consultants do today,” he said in the statement. “I do not engage in any illegal activities on behalf of my clients or the causes in which I support. There is one `trick’ that is not in my bag and that is treason.”

Stone has also released a series of supporting documents, including direct messages he exchanged with Guccifer 2.0, the unnamed hacker who has taken credit for breaking into Democratic National Committee email servers.

In addition, he has denied advance knowledge of the leak of former Clinton Campaign chairman John Podesta’s emails and says he never colluded with WikiLeaks founder Julian Assange. He has long denied that he worked with Russian officials to influence the presidential election.

“I recognize that those who believe that there was collusion between the Trump camp and the Russian state, now say Stone, `MUST HAVE’ been involved, but that is not based on one shred of evidence,” Stone wrote. This is nothing more than conjecture, supposition, projection, allegation, and coincidence, none of it proven by evidence or fact,” Stone also says in the statement.

The contents of these private messages between Stone and Guccifer 2.0 were also released, and Fox News also reported these contents.

The direct messages on Twitter, exchanged over a month-long period, show Stone first congratulating Guccifer for being reinstated on Twitter after he was kicked off. They also show him asking that the account retweet a tweet about how the election could be rigged against Trump.

Guccifer writes: “I’m pleased to say that u r great man …. please tell me if I can help u anyhow.”

Stone’s opening statement released Monday night includes his statement that as a political strategist, treason is not in his “bag of tricks.”

He further shares his family’s experience in 1956 Budapest and asserts that he “deeply resent[s] any allegation that I would collude with the oppressive Russian state.”

“While some may label me a dirty trickster, the members of this committee could not point to any tactic that is outside the norms of what political strategists and consultants do today,” he said in the statement.

“I do not engage in any illegal activities on behalf of my clients and the causes in which I support. There is one ‘trick’ that is not in my bag and that is treason,” he said.

He said as a lifelong Republican and opponent of communism, he “deeply” resents claims that he helped the Russians influence the election.

“As someone whose political activism was born from the anti-communism of Sen . Barry Goldwater and President Ronald Reagan; and whose freedom seeking family members were mowed-down by Russian tanks on the streets of Budapest in 1956, I deeply resent any allegation that I would collude with the oppressive Russian state to affect the outcome of the 2016 presidential election ,” Stone said.

Following his three hours of testimony, Stone spoke with reporters.  He stated that he thought the DNC hack was an “inside job” and suggested that Paul Manafort is anticipating his own indictment.

He answered questions for over three hours behind closed doors, refusing to provide only one piece of information: the name of an intermediary through whom he says he communicated with Julian Assange, the founder of WikiLeaks.

. . . .  When he emerged from behind closed doors on Tuesday afternoon, Stone said that he had “correct[ed] a number of the things that members of the committee had said about me” — but allowed that he believed some members of the panel didn’t “buy my claims.”

“A fair amount” of the questions were related to his communications with Assange, mostly from committee Democrats, Stone said.

The Republican leading the investigation, Rep. Mike Conaway (R-Texas), said only that Stone’s description of the meeting was “very accurate.” Committee member Peter King (R-N.Y.) described the interview as “businesslike” and “cordial.”

Stone provided a few other details about the byzantine investigations engulfing Trump allies. He said that he has not been contacted by special counsel Robert Mueller, who is heading the federal investigation into Russian election meddling.

He also said that counsel for former Trump campaign chair Paul Manafort had contacted his own lawyers to tell them that he expected to be indicted in the federal probe.

Translation: Some of the committee (guess which party) lied their buns off about him. He then told them the truth, and the same committee members proceeded to repeat their lies, much like they intend on doing to every pliable member of the press they can find.

This corrupt puke will go to jail eventually.

He was a T-rump crony for thirty years. Just like Roy Cohn, mob lawyer.

Honestly. Where do you come up with this stuff? You ought to be ashamed of yourself.

3. He was NOT a T-rump crony for thirty years (give or take)?

4. T-rump was not a long-time client of mob attorney Roy Cohn?

1. Cite and describe the crime he has committed, that would justify putting him in jail.

2. Describe, with reasonable precision, the evidence that you believe would justify the fact finder in concluding beyond a reasonable doubt that he committed said crime.

You seem all wee-weed up.

Can’t you refute anything above?

I did not make a claim. You did. You claimed Stone should be in jail. It’s up to you to prove up that claim if you want it to be taken seriously.

I asked you to provide reasoning in support of your claim, and to cite the evidence to support it. You utterly failed to do either.

You have demonstrated you are exactly what I called you: a Trump-hating loony. IMHO, this site would be a much better place of you were no longer allowed to participate.

Read what I DID say.

Refute anything you can.

Who really cares what you think about me being here?

Whatever, you Trump hating loony.

Manafort did basically the same thing. Make all the accusations, conversations, hearings, and (if any) evidence public. They won’t because they essentially have nothing.

The bombshell (if there is one) from Stone’s testimony is that during his hearing, Schiff contradicted Comey in saying that the DNC server had been examined by FBI. Comey testified under oath that it was not.

As Stone said, someone is lying.

Nothing precludes “someones”, and on various topics.

Yes, that is generally how we evaluate events and their outcomes.

Feel free to expound on your cryptic response at your leisure.

Care to refute anything I said above?