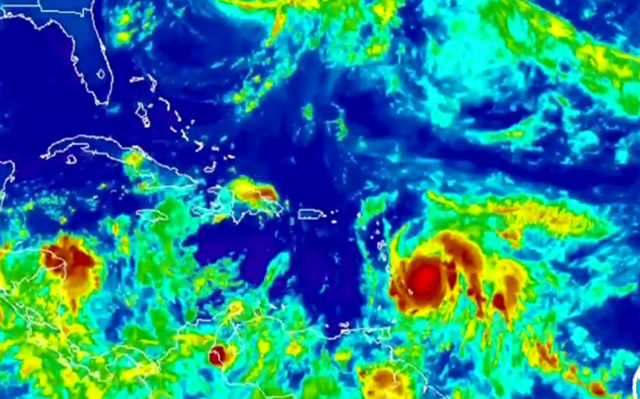 The Caribbean is bracing for another, potentially catastrophic hurricane, and the US territory of Puerto Rico appears to be in its projected path.

The National Hurricane Center in Miami says an Air Force Reserve hurricane hunter plane took the reading Tuesday evening as the storm was about 60 miles (115 kilometers) southeast of St. Croix.

Maria is moving west-northwest at 10 mph (17 kph), and is expected to pass near the U.S. Virgin Islands on Tuesday night and hit Puerto Rico on Wednesday.

As rain began lashing the U.S. territory on Tuesday afternoon, Puerto Rico’s governor warned that Maria could hit “with a force and violence that we haven’t seen for several generations.”

Maria has already slammed the Caribbean nation of Dominica, and the head of that country describes the damage as “mind-boggling”.

It was about midnight, as Hurricane Maria was battering the Caribbean nation of Dominica, that Prime Minister Roosevelt Skerrit took to Facebook. Roofs everywhere, he wrote, were being torn off by the powerful storm’s winds. He himself had to be rescued from his official residence.

…“So far we have lost all what money can buy and replace,” Mr. Skerrit said on Facebook. “My greatest fear for the morning is that we will wake to news of serious physical injury and possible deaths as a result of likely landslides triggered by persistent rains.”

While Americans watch and wait to see where Maria may head after Puerto Rico, media elements are already working on their “proof of climate change” reports. For example, the “Environmental Editor” Ben Webster of The Times U.K. asserts that the power of Hurricane Maria is boosted by global warming.

There is no evidence that climate change caused Hurricane Maria, or the earlier storms Irma and Harvey but scientists generally agree it contributed to their severity.

…Climate change is also contributing to sea levels rising, largely because of thermal expansion of the oceans. This increases the risk of storm-surge damage on coasts during hurricanes because the sea level is already higher than it would have been.

Webster is incorrect about scientific agreement, especially as it relates to man-caused climate effects. Recently, a group of prominent scientists suggested that the data used to promote the idea “climate change disaster” was a bit over-stated.

The upward revision to the planet’s influential “carbon budget” was published by a number of researchers who have been deeply involved in studying the concept, making it all the more unexpected. But other outside researchers raised questions about the work, leaving it unclear whether the new analysis — which, if correct, would have very large implications — will stick.

In a study published in the journal Nature Geoscience, a team of 10 researchers, led by Richard Millar of the University of Oxford, recalculated the carbon budget for limiting the Earth’s warming to 1.5 degrees Celsius (2.7 degrees Fahrenheit) above temperatures seen in the late 19th century. It had been widely assumed that this stringent target would prove unachievable — but the new study would appear to give us much more time to get our act together if we want to stay below it.

It seems neither the weather nor the science is settled.

Prayers are being said for those in the path of Maria.

This is bs pseudoscientific political fodder disguised as more in a top journal (and that’s the really disgusting part).

Sound the alarms and preach doomsday then walk it back for optimism to push your agenda. I hope enough people don’t fall for the trap, but I’m not optimistic. This should be published in a clinical psyc journal rather than npg journals.

If one thing is certain, it’s the Climate Change advocates will jump on any natural disaster as proof of their theory. They’ll exclude information as it suits them because the end goal is a political goal, not a goal for truth. There are a many things that are questionable about the theory, such as:

1. The outrageous threat has only has ever existed in predictive models, which have not been accurate.

2. The climategate emails that showed an effort to “blacklist” papers from journals that were skeptical of the theory.

3. The insistence on groupthink conformity on the issue in the climate change research community.

4. The manipulation of raw temperature data from the land based temperature map, which adjusts both past and present temperatures.

5. The co-opting of the topic to encompass all environmental issues and the politicizing of the subject around those environmental issues. This is why weather events, from droughts to floods to hurricanes always get included with the topic. Counter examples, such as a blizzard will either be dismissed as weather or they

6. The selective presentation of known historical data that is inconvenient to the “cause”. (Such as the long running sea level increase that has been ongoing for 22,000 years)

7. The decrease in greenhouse gas effect from CO2 as concentration rises. It’s always excluded in the topic when presented to the public. They balance this out in equations by adding a “climate sensitivity” variable. (Which I believe is a fudge factor that creates the trend they’re looking for)

Without electricity it is going to be a challenge for the PR pols to wire federal aid money to their hidden accounts.