Total lack of self awareness. 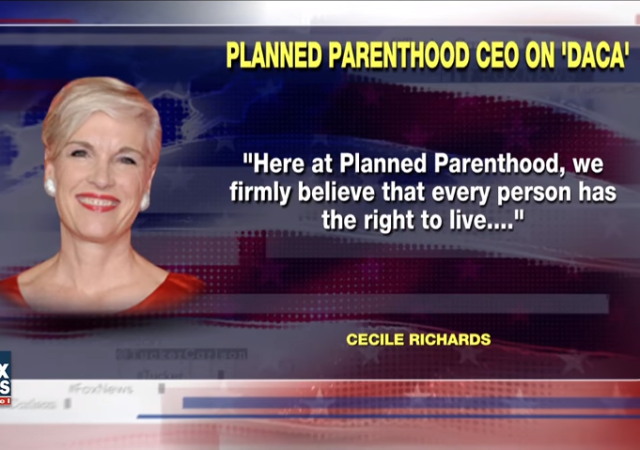 Cecile Richards of Planned Parenthood recently sent out a fundraising email. In her message, she made a statement about DACA which might leave you scratching your head. Apparently, when it comes to immigration, life is very important issue.

Kate Scanlon of The Blaze tweeted this excerpt from the email:

Planned Parenthood fundraising email: “We firmly believe that every person has the right to live” pic.twitter.com/yLwEhiufaK

Lauretta Brown of Townhall has more:

Cecile Richards on DACA: ‘Every Person Has a Right to Live’

Cecile Richards, President of Planned Parenthood, sent out a fundraising email Tuesday about President Trump’s decision to end the Deferred Action for Childhood Arrivals (DACA) program which allows certain immigrants, who had arrived in the country illegally as minors, the ability to remain without risk of deportation.

The abortion giant’s leader said, “here at Planned Parenthood, we firmly believe that every person has the right to live, work, and raise a family freely and without the threat of deportation or separation.”

Tucker Carlson discussed this with Brit Hume on Wednesday night. From the FOX News Insider:

Planned Parenthood on DACA: Everyone Has the Right to Live

Even Planned Parenthood is defending the Deferred Action for Childhood Arrivals (DACA) program by stating they believe every person has a right to live.

“Here at Planned Parenthood, we firmly believe that every person has the right to live, work, and raise a family freely and without the threat of deportation or separation,” CEO Cecile Richards said in a fundraising email Tuesday.

This would be perfect fodder for the Daily Show or Samantha Bee, but somehow I doubt either of them will cover it.

PP founder Margie Sanger would disagree. Ever notice the abortuaries are not in white neighborhoods, Cecile?

Did you catch how Planned Destruction of Parenthood
says they’ll help people to transgender or sumthin’?

Maybe PP is gonna cut them up like the murdered babies they sell for body parts???????

“here at Planned Parenthood, we firmly believe that every person has the right to live, work, and raise a family freely and without the threat of deportation or separation.”

The stupidity here is just beyond stunning.

Ann must have been drinking pretty heavily during her pregnancy with Cecline.

The tweet was funny (in a darkly ironic way). But the real funny part? Listen to what Hume says, or listen to Ben Shapiro’s talk on this topic. Trump just did what Obama could never do… He just forced the Republican Congress to address DACA. Trump wants DACA to become law.

“Logically” consistent, in its own sad, warped way, once you realized that the “fetus” (which is not translated “non-person”, just an as-yet-unborn-one) is viewed by her and her Abortion-as-Sacrament-in-the-Church-of-Choice fellow congregants as a….

…non-person, hence not even a real “human being” yet.

Ergo: Not a person? Then not actually “deserving” of life.

When Lyndon Baines Johnson and the Democrat controlled Congress created the Great Society, it spawned the massive welfare system which has destroyed entire generations of urban blacks.

When the Supreme Court found a ‘Right’ in the ‘Penumbra’ of the Constitution allowing abortion, it caused the deaths of untold millions of innocent children.

Thus it can be said the American Government is NOT ‘doing to the least of these’ but rather engaging in what Margaret Sanger wanted: the elimination of the black race combined with population control. Each and every member of Congress, the bureaucrats, and other myrmidons will be judged accordingly upon their exit from this benighted world.

Orwellian doublethink: holding two contradictory ideas at the same time and believing both are true.

They can live in Mexico.

The US cannot send them back to Mexico, Central America, Ireland, etc., that would be cruel.

But of course, when Trump or any other says something about Mexico, Central America, etc., he is a racist or a phobe because they are all such swell people.

Welcome to the twilight fringe.

To be fair, Cecile only operates the abortion chambers for the neo-Democratic Socialist Party. She does not herself deem lives unworthy or inconvenient. Although, as #CecileTheClinicalCannibal (a la Mengele), she does assess profitability, which may influence the selection process, and certainly the abortion means and methods.

As for illegal immigration of around one million annually from Central and South America, by way of Mexico, there needs to be emigration reform. The domestic and foreign globalist and Democratic interests that demand immigration reform, should not be allowed to hide the diverse causes of mass emigration. Also, their advocacy for the selective-child doctrine of the Pro-Choice Church creates an unreconcilable conflict of interest.

That said, #CecileTheCannibal is correct from the perspective of her twilight faith and Pro-Choice quasi-religious/moral and scientific philosophy. The twilighters, including the mainstream left: progressives and liberals, and the mainstream right: libertarians, sincerely believe that human life is delivered by a stork at its appointed time of viability. So, human evolution does not begin at conception, but when it is deemed worthy, convenient, or no longer profitable.

Every time a baby is born in a local hospital, chimes play Brahms Lulaby.
I wonder what tune a clinic plays when they kill a baby?