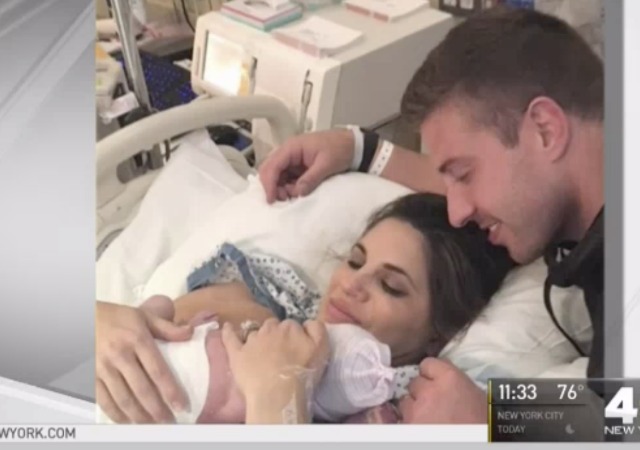 Oh BOY! Literally! NBC 4’s Natalie Pasquarella went on air on Wednesday, but something unexpected happened in the middle of a broadcast:

Pasquarella was answering a question about Twitter’s new character limit near the end of Tuesday’s broadcast when she let out an uneasy laugh. That was the second she went into labor.

A true professional, she waited until the show was off the air before letting someone know the baby was coming. News 4 New York at 11’s executive producer and others at 30 Rockefeller Plaza helped get her to a hospital, where she met her husband, Jamin.

Then, 13 hours later, baby Jamin James Pastore — so excited to meet his parents he came early — was born, weighing in at 5 pounds and 6 ounces.
She says she and her husband are overyjoyed to meet their new son.

A beautiful blessing decided to make his entrance early! Thankful for all of the well wishes. Our hearts are full! ‬❤️ #BabyJ #JaminJames #SoInLove #babyboy #love

A friend’s first-grader came home one day with the news that his teacher’s water had broken during class. She sent a kid to the principal with a note to send a substitute asap, and continued teaching until the substitute got there. And she explained to the class what had happened as best she could at their level, close enough that my friend could understand from her son’s report what had happened.