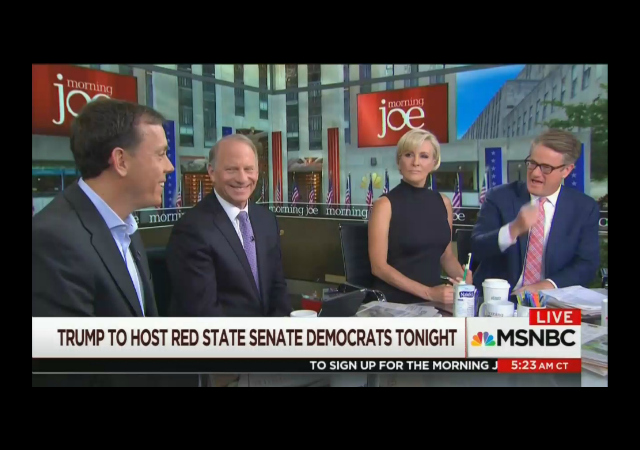 For months Morning Joe has offered up a steady stream of apocalyptic condemnation of President Trump: his mental health has been explicitly questioned and comments on Charlottesville were blistered, with one panelist calling on his aides to resign en masse or be “forever tainted with the stench.” Just last week, Mika Brzezinski was calling Trump “unhinged,” claiming she couldn’t distinguish between Trump and Kim Jong Un.

All of which makes the praise for President Trump on today’s show all the more remarkable. Joe Scarborough led off by observing that “everywhere I’ve gone, people have been talking about Donald Trump’s sort of shift.” He praised the president’s “even-keeled” tweets and the “steadier” organization inside the White House.

Richard Haass, president of Council of Foreign Relations, spoke of the “best 10 days of the Trump presidency.”

Even Mika Brzezinski, who has been Trump’s implacable antagonist, grudgingly joined in. After cautioning that the shift might be “unsustainable,” Mika acknowledged that “this appears to be a good turn of events.”

Note: My Quick Hit of this morning, written before the show aired, sounded a similar note, attributing President Trump’s recent bump in the polls to the solid response to Hurricane Harvey, and the fact that the president has “laid off the controversial tweets in recent times.” Should I be worried about thinking like Morning Joe?

Note segundo: Scarborough cites the Axios newsletter explanation of why Trump made the shift, saying Trump looked around and said “people hate my guts.” Turns out it was even stronger than that.  Axios has a Trump aide quoting the president as saying, “people really [email protected]&@ing hate me.”

JOE SCARBOROUGH: Everywhere I’ve gone, people have been talking about Donald Trump’s sort of shift, with what happened last week. The tweets have slowed down. They are even-keeled, if you compare them to tweets in the past. Organization inside the White House seems to be steadier than it has been in quite some time. And the president meeting — is it tonight? I think he’s meeting.

JOE: With Democrats that you can get over to your side. It’s fascinating. What do you make of the shift that is at least lasted for five, six days now?

RICHARD HAASS: Plus the two trips to Texas. In some ways, it’s been the best and almost most normal week, ten days of the Trump presidency and what everybody is asking is whether it was you know a one-time thing, a one off, or whether this is the shift, the pivot whatever you want to talk about, that people have been talking about for years.

MIKA: This could be the [chief of staff John] Kelly factor, which may be unsustainable, but it certainly appears to be a good turn of events.

JOE: I love the quote in Axios, the newsletter: why is he doing it? Donald Trump looked around and he said, man, everybody hates my guts!

JOE: Hates my guts! And he came to the conclusion, I’m going to stop doing things that make people hate my guts.

Joe just received a new narrative memo. Or maybe a wrong memo. He will receive a new memo next week. The substance of a leftist is meaningless as it is meant to deceive thinking people. Watch the process.

notamemberofanyorganizedpolicital in reply to TX-rifraph. | September 12, 2017 at 9:40 am

The MSM is always faking everything imo.

Of course MSNBC is bleeding money like a ISIS beheaded victim too, so…..

“Everywhere I’ve gone, people have been talking about Donald Trump….”

I almost spit out my coffee in laughter. Am I supposed to believe that Scarborough at all leaves a bubble or every makes contact with ordinary people?

Well to be fair to Joseph, he most probably does not know anyone who voted for Trump.

I wonder how long before Joe realizes what it means for the 2020 election, that all the people he knows are starting to think Trump is maybe doing a good job?

“Oh, wait! He could get reelected!”

The left has a weekly narrative. Trump has done such a great job with the hurricanes there is no point attacking him and looking crazy. When Trump gets re elected Joe will say he was with him from the beginning.

notamemberofanyorganizedpolicital in reply to Jackie. | September 12, 2017 at 2:16 pm

I wonder if the GOP-e issue their own talking points each week or just follow the dictates of the Democrat Party issued talking points?

From all the GOPe collusion with the Democrats, I guess they just follow their Democrat bosses’ talking points.

I do hope everyone here realizes that the GOP Establishment has been trolling conservative web sites for months now. Why else would the GOPe send out an email under President Trumps name asking what web sites you read? (But a quick hit of the “Reply” button revealed it was email from the GOPe, not really from President Trump…..)

I’m double posting this under two stories, because it’s important.

Remember on this day in 2012, we were being told our embassy had been attacked because of a YouTube video.

The media pushed that narrative w/out question for 6 months.

Remind me again why I should be believe anything the media tells us?

They’re pretending to chortle about … what? Trump jumping ship and swimming over the the Dem’s lifeboat? That would be the only thing which would cheer them up.

But then there’s this discordant note—

JOE: With Democrats that you can get over to your side.

Hmmm. That sounds like Dems jumping ship and swimming to Trump’s lifeboat. The only way that can be spun into a Trump setback is if so many Dems climb aboard that they swamp the boat.

But Joe recovers, with this bit of illogic—

JOE: Hates my guts! And he came to the conclusion, I’m going to stop doing things that make people hate my guts.

No evidence for that at all. He could be claiming success, and announcing a determination to do more of the same. History doesn’t judge a President by how chummy he is with all the Washington riffraff.

As FDR said, “I ask you to judge me by the enemies I have made.” Not the friends.

They can sing all of the praises of my President all they want…I will not be tuning in to their ridiculous show. No need.