Package also contained letter threatening Prime Minister Benjamin Netanyahu, who is in now in NYC ahead of UN meeting. 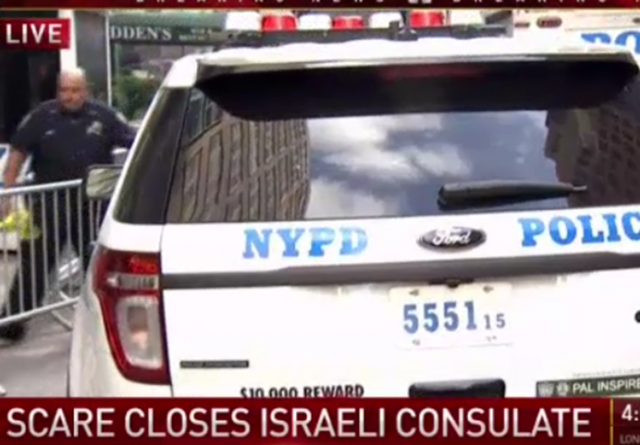 Israel’s mission to New York reopened after being closed following an evacuation Friday in response to the discovery of a package containing white powder and a letter threatening Prime Minister Benjamin Netanyahu.

The Israeli Consulate was closed off due to the suspicious nature of the powder in the package, and the staff has been ordered to remain inside while the material was inspected.

The source told the Post that the building has been on lockdown and no one was allowed to enter or leave the premises. New York State Department Police have been called to the scene after the contents of the package were discovered and screened in the consulate’s screening room.

The [Jerusalem] Post has also learned that the threatening letter in question was written in English and addressed directly to the premier.

According to Israeli media, the letter contained an explicit death threat.

There is no information currently available on the nature of the white substance found in the package.

This incident occurred shortly before Netanyahu landed in New York, as he will be participating in the United Nations General Assembly’s 72nd session. Additionally, he will be meeting with President Donald Trump.

Israel’s Prime Minister indicates that the main message of his upcoming speech at the United Nations would be that Israel would not tolerate an Iranian presence on its northern border with Syria.

Speaking to reporters from his hotel in New York on Friday, after wrapping up a historic trip to Latin America, Netanyahu said that “the central message will be that Israel will not tolerate an Iranian military presence on our northern borders, which endangers not just us, but also our Arab neighbors.”

…He is due to address the UN on September 19 and meet with US President Donald Trump a day earlier.

The meeting will be the two leaders’ fourth together since Trump assumed office. The two met once in February when the Israeli premier visited the White House, and twice in May when the American president traveled to the region, which included a two-day stop in Israel and the Palestinian territories.

Trump too is slated to address UNGA on September 19.

They’re as nutzo as everyone else.

and no one was allowed to enter or leave the premises.

If they’ve discovered something possibly noxious, what is the justification for locking everyone in with it?

In 1973, the NSA foiled a Palestinian car bomb plot to assassinate Prime Minister Golda Meir on her trip to NYC