When it comes to aiding those hit by disaster, Israel once again leads the way 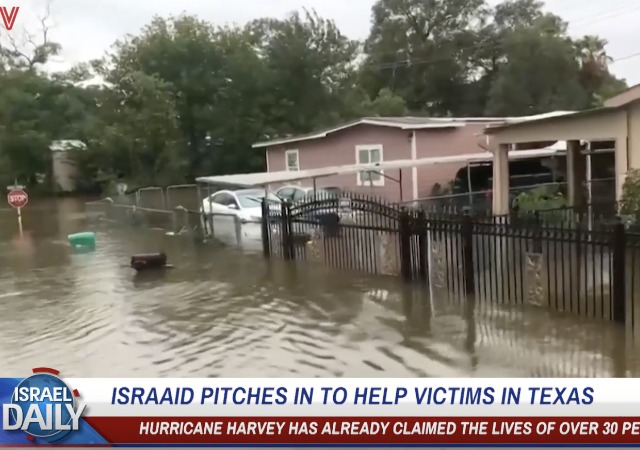 Though Israel is a small country, when disaster strikes it is among the first countries and most involved in rescue and recovery efforts. (I blogged about this nearly four years ago. The IDF published an updated article on Israel’s aid in emergency situations last month.)

While Israeli volunteers often go to places Nepal, Haiti, or the Philippines, Israel was again at the forefront of international rescue and recovery efforts in Houston.

IsraAID, the Israel-based NGO, immediately sent volunteers to Texas in the wake of hurricane Harvey.

“For the most vulnerable groups, notably children and the elderly, time is of critical importance; the longer these groups are forced to remain in shelters, the higher the chance of long-term mental health problems such as Post Traumatic Stress Disorder (PTSD), a disorder that can have a debilitating and long-term impact.”

IsraAID planned to work with the local Jewish communities, the local government, and Israel’s Consul General to extend aid to those who need it. The organization also planned to make mental health professionals – both American and Israeli – available to victims of Harvey.

In addition, IsraAID was going to set up shelters and help clean up debris left by the flood. While this was going on IsraAID still had relief workers in Nepal and Sierra Leone, helping out with their recent floods.

A second Israeli group, Iaid, also sent a group of relief professionals to assist efforts to help those affected by the storm.

Later, a third Israeli group, United Hatzalah’s Psychotrauma and Crisis Response Unit sent some of its members to help counsel victims of the flood.

The Jerusalem Post profiled one of the United Hatzalah members, Miriam Ballin, a Houson native, now a Chareidi Jew living in Jerusalem.

Ballin traveled to Houston, leaving her husband, a physician, in charge of their five young children. Though the physchotrauma unit was founded last year at Ballin’s behest in response to the wave of violence that started in September 2015, she feels that the unit is prepared to deal with consequences of other emergencies.

“I just feel it’s necessary and needed, and simply the right thing to do,” she told the Post. “When we have 150 people who have been trained to deal with exactly this, not to send them to Houston to help out is I think wrong.”

“As a small organization from a small country, we found we could make the biggest impact by mobilizing our Psychotrauma Unit,” Dov Maisel, United Hatzalah’s  vice president of international operations said, explaining why his organization was sending the psychotrauma team. “The provision of psychological support in the acute stages of trauma, from incident to seven days, is something we’re leading the world in.”

“I’m happy to be given the opportunity to head back to my hometown and help during this time of crisis. Our team provides the IRC with a new capability developed in Israel that no one else in the world is currently doing,” Ballin told the Post in an earlier article.

“The community in Houston and the people of Texas feel a strong connection to the State of Israel and many of them are big supporters of the state and of the Jewish People. It is therefore, our responsibility to help them in their time of need, as friends and professionals who can offer help to our fellow human beings,” she continued.

Minister for Diaspora Affairs Naftali Bennet announced a $1 million pledge saying, “The Jewish State is measured by its response when our brothers around the world are in crisis.”

The money which will be transferred through the Israeli Consulate in Houston will go to aid those religious institutions which are not funded or supported by the state.

Once again, when it comes to providing aid to those hit by catastrophe, little Israel finds itself at the forefront.

Funny how Iran – with all the billions in cash that treasonous dog barack obama ordered flown there on pallets – doesn’t return the sentiment.

Iran May Have Received as Much as $33.6 Billion in Cash, Gold Payments From – Obama:
http://freebeacon.com/national-security/iran-may-received-much-33-6-billion-cash-gold-payments-u-s/

Obama Service Award Recipient Now Researching ‘Butt-Fisting’
“Sendler now oversees a group of research students at the University of Lublin Medical School in Poland, where he is studying zoophilia—people who claim to be sexually attracted to animals—and people who have been “butt-fisted by [a] human sexual partner.”
http://freebeacon.com/culture/obama-service-award-recipient-now-researching-butt-fisting/

The legacy of ‘barack hussein obama’ – or whoever the hell he really us. Ugh.

Iran did not get the money from Obama. No, the American taxpayer had the privilege of giving Iran that money.

Did you give it to them? I don’t remember giving it to them, either.

It was their money, not the taxpayers’. Plus the interest owed on it, at a very low rate; they had been demanding a lot more, and had it gone to court they’d likely have won most of what they were asking.

0bama was wrong to return it to them, because we know how they’ll use it. There’s a good reason the USA had been holding on to that money for decades and refusing to return it, and that reason hasn’t changed. But don’t forget that it was rightfully their money, we had no legitimate claim to it at all, so it didn’t cost the taxpayers anything.

However, many people who have outstanding judgements against Iran are justly angry that their claims were not paid out of that money first.

The money was confiscated from Iran. It was not “our” money.