Why Isn’t the World More Thankful to Israel?

Why Isn’t the World More Thankful to Israel?

Israel is a world leader in humanitarian aid yet it is rarely recognized for this great quality.

The Israeli delegation has just returned from the Philippines after nearly two weeks of providing emergency care to the island nation’s survivors of Typhoon Haiyan. According to the Jerusalem Post the first baby delivered by the Israeli medical teams was named “Israel.”

In fact Israel – the IDF particularly – has been one of the world’s great first responders in recent years, helping countries across the globe deal with the results of man made and natural disasters. The IDF has a map on its blog, with links to many of its notable accomplishments.

View #IDFWithoutBorders in a larger map

The majority of the medical equipment taken to Japan by the IDF, including x-ray machinery and lab equipment, will remain in Japan in order to benefit the physicians and local authorities providing care to the community of Minamisanriku and its vicinity. …

The IDF Aid Delegation departed for the disaster-struck zone two weeks ago, and included a team of medical specialists from the Medical Corps, Home Front Command Search and Rescue experts, as well as logistics and communications personnel. 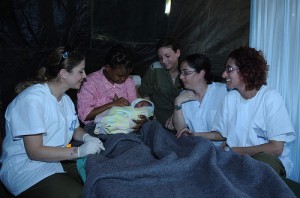 The IDF Medical and Rescue team, including personnel and equipment for setting up a field hospital and a small rescue team, left for Haiti 11 days ago, on January 15th 2010, and had a significant role in providing aid to survivors of the earthquake.

During their stay in Haiti, the delegation treated more than 960 patients, conducted 294 successful surgeries, delivered 16 births including three in caesarian sections and saved many from within the ruins.

Some Israeli teams actually stayed on longer after other international aid groups had left, occasioning this commentary from Frida Ghitis:

While the harshest critics of Israel’s morality, the countries that have done their best to smear Israel, did not lift a finger to help Haiti. Israel, a land smaller than New Hampshire, sent hundreds of emergency workers, one of the largest contingents. When other countries started packing, Israeli said they will stay there at least another month.

Israel’s demonizers will concoct sinister reasons for Israel’s good deeds. You can count on that. Israel’s response to Haiti’s plight shows the country’s true face — a face its enemies don’t want you to see.

According to Israel 21c:

Jerusalem was asked – and agreed – to send trauma experts to help survivors of Sri Lanka cope with the tragedy, while Thailand’s government turned to Israel’s forensic experts for help in identification of thousands of victims.

Israel is currently providing aid to some countries with which it does not have diplomatic relations, such as Sri Lanka and Indonesia.

This week, an El Al plane carrying 60 tons of aid landed in Indonesia – a country which has the largest Moslem population in the world, and no ties with Israel.

The IDF delegation of search and rescue soldiers created a field hospital (in close proximity to the disaster site) with 100 beds. The delegation treated up to 1,300 injured, performed 52 surgeries and delivered 12 babies.

As in the Philippines and Turkey (see below), a child born in one of the field hospitals was named Yisraela. (The online source for this story is no longer available.)

Eight babies have been born here since the quake. One boy was named Israel, and one girl is called Ziona. Their names are symbols of how firmly the earthquake has sealed the alliance between Israel and Turkey.

”God bless the Israelis,” said one new mother, Serap Balcioglu, whose child was born blue and seemingly lifeless but was revived by an emergency team at the hospital. ”They’re taking beautiful care of me. What would we do without them?”

In 2011, after initially rebuffing an Israeli offer of aid following an earthquake, Turkish Prime Minister Erdogan requested temporary housing from Israel. But his initial refusal to request aid prompted a survivor to complain:

“The prime minister runs for help when it’s Palestine or Somalia, sends ships to Palestine, almost goes into war with Israel for the sake of Palestinians, but he doesn’t move a muscle when it comes to his own people…” 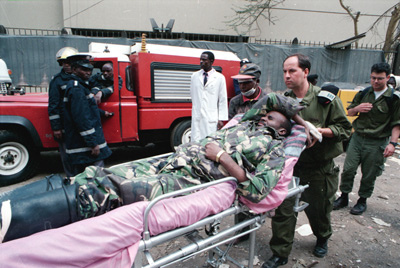 On August 7th 1998, a car bomb exploded near the US embassy in Nairobi, Kenya.

The Prime Minister of Israel sent an IDF aid delegation. The task force consisted of approximately 170 people, including search and rescue teams and medical experts. The task force personnel rescued three survivors and recovered 95 bodies. The Israeli team was the first foreign mission to reach the site and began working immediately.

They honed their skills after earthquakes in Mexico and Armenia, bombs in Argentina and Scud missile attacks at home in Israel. Now world experts at rescuing the living from rubble and recovering the dead, Israeli soldiers are running a round-the-clock effort to dig Kenyans out of the ruins left by a terrorist bomb.

“You are heroes,” a Red Cross volunteer shouted at the Israelis on Sunday.

“We are not heroes. We are only working,” Maj. Ofer Pomeranz answered with a modest shrug. 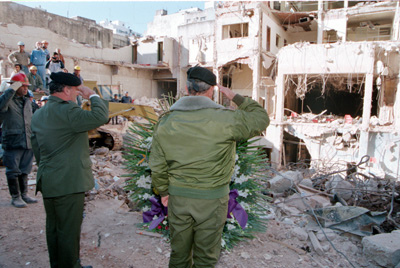 On July 18, 1994 terrorists committed a massive attack on the Argentine Israelite Mutual Association building in Buenos Aires. The terrorist attack killed 85 and injured hundreds. It was Argentina’s deadliest bombing ever. Argentina has one of the largest Jewish communities in the world.

On the 19th of July a team of search and rescue and other military staff landed in Buenos Aires. The team began working immediately after their arrival to Argentina and developed a new system into which the Argentinians adapted. The system of search and rescue was so advanced that the teams were able to complete more in the first two hours upon their arrival than was previously accomplished in the two days prior.

This is only a sampling of Israel’s many humanitarian missions over the years. There have been more including sending a team to Cameroon in 1986 after a poison cloud emerged from a lake killing hundreds of villagers and a group of medical professionals to Central America in the aftermath of the devastating Hurricane Mitch. I could also mention that while the world fiddles around with Syria, over 100 Syrians have temporarily escaped the ravages of war there and gotten treatment in Israel. In recent weeks two Syrian babies were born in Israel too.

There are number of ironies with these missions.

Two weeks ago the Palestinian media reported that Ismail Haniyeh’s granddaughter had been transferred to an Israeli hospital. The Algemeiner noted at the end of its report:

There was no word on who would cover the cost of treatment, but in most cases Israel foots the bill for Palestinians seeking treatment in the country.

The irony here is astounding. The granddaughter of a man whose career goal is the destruction of Israel was cared for by an Israeli hospital at Israel’s expense!

Last week the world hailed a nuclear agreement between the P5 + 1 countries and the new “moderate” regime in Iran. This regime includes a justice minister called the “minister of murder” for his involvement in the summary executions of thousands of prisoners in the late 1980’s and a defense minister who was instrumental in establishing Hezbollah as an international terror organization and was responsible for the marine barracks bombing in Beirut in 1983. It is a regime that represses its own people and is fully behind the murderous regime of Bashar Assad in Syria. This is also the nation that allowed its citizens to die rather than accept help from the “Zionist regime.”

Given its record, why isn’t Israel viewed as a generous, even progressive nation? And why doesn’t the world thank Israel for all it does instead of endlessly condemning it?

Israel is a convenient scapegoat when arguments grow tired. Don’t get distracted by the squirrel!

This is one time when folks don’t want to ‘blame’ the Jews. A kid healed? Clean water? A dry place to sleep? Survivors dug out from under rubble? Nobody wants to say ‘da Juice did it! ‘Blame’ da Juice!’

I get funny looks from Japanese people when I speak the language in my wife’s southern Hakata dialect. Probably like an American hearing a Japanese national speaking English with a Texas twang. Hearing Japanese with a Hebraic accent made me laugh.

You can’t control what the meanies say about you.

But, in turn, they can’t control you’re good-work outreach to the rest of the world.

Good on you, Israel, for helping the good people of the Tohoku region of Japan. Among the Japanese, they hold a special place in Luke’s heart because, like many a country’s northern residents, they tend to be shyer than their fellow countrymen, something with which the social-phobic Luke can identify.

How he ended up married to a fiery southerner he’ll never understand.

A lot of these Isaraeli-aid generosities may not be as well known as one would expect. It’s common knowledge that Israel helps Arab families from Judea and Samaria. Some of these instances of Israeli aid are totally new to me.

How many people know? If they don’t know, why not? Is the LSM obscuring Israel’s peaceful efforts around the globe? If they are, what can and should Israel do?

What is certain is that Israel is building a reservoir of good will around the world, but why doesn’t that translate into support at the UN? Is it short memories? Ingratitude? Or, is it media-produced-and-assisted anti-Semitism?

Israel was turned away at the airport when they arrived uninvited to ‘help’ Christchurch after the 2011 earthquake.

Too late . The Kiwis already suspicious of 3 Israelis fleeing in panic mode . They went looking & sure enough several crushed spies with some very interesting equipment. A van was a particularly prized find.

Why NZ? There is a history of Israel trying to break into shared US intelligence via treaty nations.

Israel’s presence in both Japan & The Philipines is not humanitarian. Can’t say I blame them but get real guys.

NZers are deeply anti-Semitic and strongly pro-Islamic. I went there a few years ago and was appalled. Had a bit of a mix up on the plane going in with this couple and refused to put up with their anti-Semitic nonsense. In addition, they are very secular, so secular that even the church services are a bit lame. I don’t think I met anyone there who was pro-Israel. So, this about Israeli disaster troops being turned away is no surprise. I hope the NZers enjoyed the assistance of the Islamic disaster rescue squads.

Oops! Wait a minute, no such squads.

Israel’s presence in both Japan & The Philipines is not humanitarian. Can’t say I blame them but get real guys.

There are plenty of willful idiots like you who say the same of American humanitarian aid, as well.

“Israel’s presence in both Japan & The Philipines is not humanitarian. Can’t say I blame them but get real guys.”

Ummmm … Banned … it doesn’t get much more rural small towns and villages in Japan than the Tohoku region of the devastation.

It is hundreds of miles from Tokyo. There ain’t nothing of much there but nice people where the Israelis, I dunno … would be bugging … what? Rubble? Delivered babies? The casts of broken bones?

For a relatively small country (population-wise)in comparison to others, I am amazed at the number of Nobel Prizes Israel has garnered in medicine and science. Well more than whole of Islam.