Insists she take his generator to power her father’s oxygen 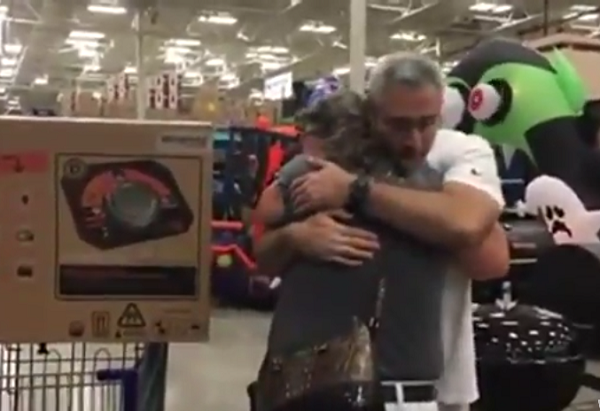 As America endures an era of seeming wide-spread division, Hurricanes Harvey and Irma remind us that Americans are good people at heart and that we are not fettered by the identity politics that poison the left.

In Florida, a woman desperate to obtain a generator to keep powered her father’s life-maintaining oxygen drove 30 miles.  She was standing in line, next to purchase the coveted generators, when it was announced that the store was sold out.

She broke down in tears, knowing that without a generator for power, her father might die.  A man ahead of her in line insisted that she take his generator, stating that “she needed it more.”

Like many Floridians racing to buy food and supplies before the arrival of Hurricane Irma, Pam Brekke found herself miles from home today, desperately hoping to score a generator.

According to ABC affiliate WFTV-TV, Brekke, a Sanford, Florida, resident, had spent days waiting for empty shelves to be restocked and searching for a generator.

She said today that she’d traveled more than 30 miles to Orlando to a Lowe’s Home Improvement store that had received a surprise shipment of a little more than 200 generators.

Within two hours, however, the generators were sold out and Brekke, who had been next in line, was empty-handed.

. . . . A heartbroken Brekke then began to cry. Ramon Santiago, who had gotten one of the generators but had not purchased it yet, noticed and insisted that she take his.

Brekke shared with Santiago that it was her ailing father who needed the generator to power his oxygen supply.

The story doesn’t stop there.  When Lowe’s got more generators, the first person they called was Santiago.   He received a free generator in response to his generous, selfless act.

He also saw Brekke crying and insisted that she take the generator he’d carted but had not yet bought. Brekke shared that she’d wanted the generator not for herself but actually for her ailing father who needed it to power his oxygen supply.

“I’m worried about this storm,” she told WFTV.

The two embraced and went their separate ways but their story — a random act of kindness in the middle of chaos and stress before a deadly storm — made the rounds not only on social media, but also at Lowe’s.

When a new generator became available later that day, the store manager told WFTV that she immediately thought of Santiago. On Friday, Santiago returned to Lowe’s with WFTV to get his own generator for free from the store.

“I wanted to make sure he received it because he definitely deserved it,” manager Melissa Rodriguez told WFTV. “He’s the hero of the day.”

Leftist pols and their media puppets peddle division, yet the American people rise above and reject their rabid efforts to create division and hate.

Americans pull together and help each other; race, class, gender, and political affiliation doesn’t play into it.  Much to Democrats’ chagrin.

It’s not “identity politics”. That’s a euphemism designed to support a political myth to create leverage. It is racism, sexism, and other forms of bigotry (i.e. sanctimonious hypocrisy) where individuals are judged collectively (e.g. “color of skin”), rather than by the “content of their character”.

That said, a conservation of principles, and a nice moment between strangers, no more.

A euphemism designed to minimize… nay, mitigate, proper attribution. It’s time to set aside progressive liberal things, and pursue a conservation of principles.

It’s also not about a man, other than as a generic reference to an unidentified male individual, and a woman, similarly. There is a time and place to note sex (i.e. male, female) differences, as well as gender (i.e. masculine, feminine) implications. Each of us do, or should strive to do, what we can, when we can, if we can.

Anyway, this goes to so-called “identity politics” that has set, among other classes, men and women at each other’s throats, for political progress, no less. It is not intended to criticize or distract from your point, class-agnostic charity, Fuzzy Slippers. It’s just something in the present time that needs to be repeated again and again and again.

Our nation has great people as these two hurricanes have shown us. But for some reason we have a political party that can only get votes by telling us we are racist homophobic fascists. Remember these stories when Piglosi and Waters tell us how bad we are.

My son owns a small engine repair business in Florida. For the last week he’s been covered up with generators in for repair. He was working 12 hour days to fix them all. He had so many that he closed his business yesterday to finish them up. There was one lady who came in late and begged him, so he was supposed to make a special trip to the shop to fix hers today. I chastised him for not charging “overtime”, but he just charged his regular rate.

Not to take anything away from this deed but generators breed unwarranted complacency.

Expect power to be off for 10 to 14 days. Unless you already have 75 to 100 gallons of gas stored you will run out. If you have that much gas you better have guns to protect it. After Andrew in Homestead, looters targeted gasoline as their #1 prize.

Civilization will crumble after five days. Power and relief supplies will be take much longer to arrive.

Oh jeeezzz…. nice story and you just have to asshole all over it.

Matt, have you been binge watching CNN again. Tsk..tsk…

Read this post by Sundance at the Conservative Tree House and you will get a better idea of what these people are going to be dealing with.

What’s the opposite of an obama/sharpton looter?

One day chelsea clinton will beam with pride, showing friends a bauble on her wrist, telling them:

So the story and headline are confusing… did he buy the generator and give it to her? Or did he let her purchase the last generator which he had on his cart but had not yet paid for?

Letting someone who needs it more purchase the last one available is nice and all, but not as selfless as paying $800 bucks for one and then giving it away. Story is not at all clear which scenario actually occurred.

The story is clear. He let her buy the one that was on his cart.

See, that’s an example of Toxic Masculinity right there. The guy only did that so he could get her phone number and…well…you know that all men want.

Now she just needs about 100 gallons of gas and an electrician.