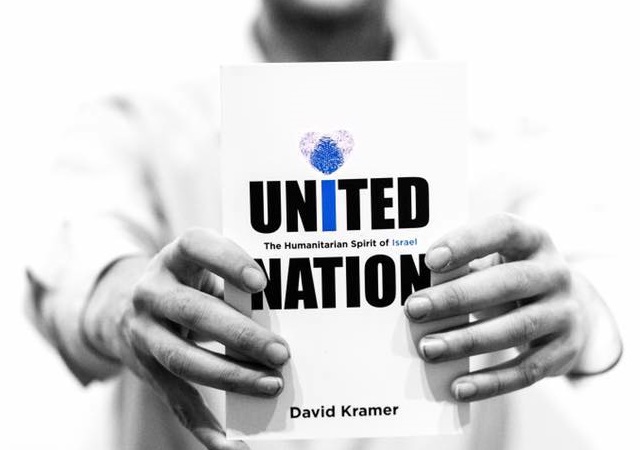 At a time when smear campaigns against Israel often go unchallenged on college campuses and anti-Israel activists hijack protest movements across the U.S. to attack of the Jewish State, a newly published book tells the story of Israel’s 69-year silent journey to impact the world and serve those in most need. “United Nation: The Humanitarian Spirit of Israel” written by the Israeli entrepreneur David Kramer, is a collection of 40 stories, each illustrating the benevolent and altruistic side of Israel that the mainstream media and the 24-hour news cycle don’t care to show.

“Today, a great disconnect exists in the general perception of Israel throughout the world. Israel is the only country where a global boycott and sanctions movement against it continues unabated on most college and university campuses,” David writes. “However, the reality of life in Israel is totally different. In truth, Israelis embrace a deep appreciation and responsibility for life despite the many challenges they face on a daily basis and this is evident by the thousands of different charitable organizations currently working in Israel and all over the world.”

With 32,000 non-profit organizations based throughout the tiny country, Israel has the highest number of charities per-capita. IsraAID, country’s largest non-profit organization, with expertise in disaster relief and international development, has responded to crises in more than 39 countries, delivering 1000 tons of relief and medical suppliers and reaching over 1.5 million people in need. To date, Israel has sent over 140 official aid missions, to over 50 countries. When major earthquakes strike, Israel Defense Forces (IDF) is the first to respond by setting up field hospitals — be it Gujarat (2001), Haiti ( 2010) or Nepal (2015).

“The stories presented in David Kramer’s United Nation embody Israel at its best,” commented Ambassador Danny Danon, Israel’s Permanent Representative to the UN. “From bringing clean water to the thirsty, to providing aid where it’s needed most, this is the real Israel — working every day to make the world a better place.”

David is not just a master storyteller, he walks the talk. He is the founder of NU Campaign, an online platform that helps social initiatives to tell their story to a wider audience and raise funds for their local or global causes. In fact, that’s how I came to know David. In 2015, he helped our small grassroots initiative Indians4Israel to raise much needed funds for our advocacy work.

This book for anyone who wants to understand what makes this tiny and embattled Jewish State a humanitarian superpower.

Kind of surprised to see that no one on this blog has said anything about Valerie Plame’s support for a proposal to force all Jewish writers to specifically identify themselves as Jewish, in anything they write.

I don’t know, maybe she wants them to put a big yellow Star of David on anything they produce.

from wiki Plame’s paternal grandfather was Jewish, the son of a rabbi who emigrated from Ukraine; the original family surname was “Plamevotski”. The rest of Plame’s family was Protestant (the religion in which Plame was raised); she was unaware of her grandfather having been Jewish until she was an adult.

not unusual behavior of progeny embarrassed of their Jewish roots. A way o prove to the Gentile world that she was one of them and NOT Jewish and she is right she is NOT Jewish but does hate them.

gla she is not a JINO like Soros (pronounce tsuris
tsu·ris
ˈtso͝oris,ˈ/
noun: tsuris
trouble or woe; aggravation.)