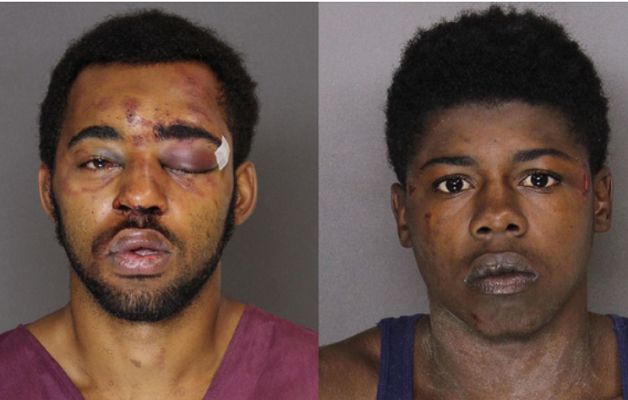 Two armed individuals entered a bar in Baltimore, Maryland with armed robbery on their mind.  What they got, however, was a room full of police officers attending a retirement party for one of their colleagues.

In an outlandish twist to an armed robbery, two masked men stormed into a pub in Baltimore, Maryland, on Tuesday, only to find it filled with police officers.

Joseph McInnis III, 21, and 22-year-old Tyree McCoy entered the take-out portion of Monaghan’s Pub in Woodlawn a little before 5:30 p.m, holding up an employee at gunpoint before running off with an undisclosed amount of cash, according to WBAL-TV.

However, what they did not know was a group of police officers was attending the retirement party of one of their colleagues in the same pub.

And it was not long before the off-duty officers ran out of the pub and apprehended the duo.

Baltimore County Police Officer Jennifer Peach said about the incident: “At that time, the person who had been behind the counter knew that there was a retirement party for a police officer happening, so they went into the other portion and alerted the officers to the fact that they had just been involved in an armed robbery.”

He added: “I’m sure that they weren’t planning on there being a large room filled with police officers,”

The owner of pub, Jack Milani, told Baltimore Sun that it was odd the robbers would chose to rob a place that was located right across a police station.

“It’s kind of odd you would even attempt it,” he said. “Officers are always in here. There was a decent amount of them.”

The crooks were charged with armed robbery and possession of a handgun and were being held without bail at the Baltimore County Detention Center, reported the New York Post.

Reminds me of this scene… NSFW language. https://www.youtube.com/watch?v=3GAgIBgOA3M

“Criminal stupidity in the first degree.”

Have the police been charges yet?

i guess these perps were black irish.

the preponderance of blacks coming t the usa prior to
1865 were slaves.

most/many of the slave traders in africa were arabs and other blacks.

the slaves were the dumber/slower/unlucky blacks.
ergo the black population in the post uncivil war, were not the pick of the litter.
rather than trying to bring blacks into the mainstream by education, we have the ‘everybody gets an award mentality’ which discourages school training for trades and causes Jews and Asians to compete unfairly for college admissions.

this also encourages Jews to go to Israel for university and Asians to also leave the USA.