All Hail the Cajun Navy

All Hail the Cajun Navy

And their meal counterpart — Cajun Gravy 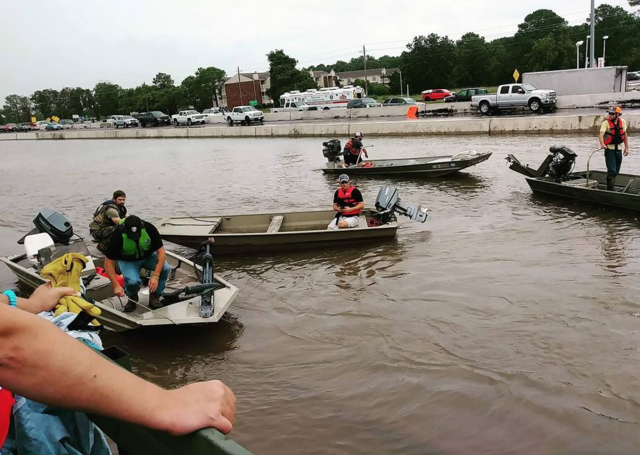 If you hadn’t heard of them before Hurricane Harvey, you certainly have now — the Cajun Navy as they call themselves, is a band of rugged Louisiana outdoorsman (and women) who load up their boats and caravan into flooded areas, performing rescues.

They’ve been a tremendous asset in rescuing folks flooded out by Harvey in the Houston area, the Gold Triangle, and even down towards Port Aransas.

Formed during the massive Hurricane Katrina rescue efforts in 2005, these volunteers work together using their personal water crafts to coordinate water rescues.

The arrive with more than boats:

Using social media and the Zello walkie talkie app, Cajun Navy members were able to locate and deploy to those needing rescue.

But the navy isn’t the only band of volunteers sent by our sister state Louisiana. A caravan of meal-makers, going by “Cajun Gravy” showed up to do what they do best — feed people, and first responders in particular.

While Louisiana’s Cajun Navy is hard at work rescuing Texans from the aftermath of Hurricane Harvey, The Cajun Gravy is making sure first responders are well fed. The Cajun Gravy is cooking up famous Louisiana dishes, including things like jambalaya and red beans and rice.

Thursday afternoon, they were operating out of Orange, Texas at a temporary housing location for about 1,000 first responders. Among those being served are Louisiana Wildlife and Fisheries agents, Louisiana and Texas National Guard members, strike teams, and water rescue personnel.

A group of Louisiana cooks from the cities of Baton Rouge, Gonzales, and Donaldsonville formed the group after seeing the devastation left behind by Hurricane Harvey. One of the founders, Kyle Rome, owns Kickstands Kitchen, a catering company in Ascension Parish.

Rome says the Cajun Gravy all started with a phone call from Brett Dunham, owner of Le Chien, a new brewery coming to Baton Rouge. Rome says Dunham knew he was a chef and asked if he wanted to help cook for storm victims.

“We decided to put a group together to go to Texas,” Rome said in a Facebook post. “We started making calls to friends that own businesses to see if they wanted to donate. It started to snowball so much that we were able to fill five trucks and about 70 feet of enclosed trailer space, just to pull what we had been given in donations over the past four days. We made a PayPal account to be able to accept monetary donations so we could buy food and supplies to cook while we were in Texas. We received over $7,000 in the same four days. We had enough food with us to be able to make over 10,000 plates from the cash and donations,” he wrote.

All hail the Cajun Navy and God bless Louisiana.

Remember during Katrina how Gov. Blanco turned away the Cajun Navy, The Red Cross, and doctors from out of state?

Yes, SnoperCod, I remember them telling private citizens not to go to New Orleans to help, while we were seeing photos of a man dead in his wheelchair on an interstate.

And people started going to help anyway because it was obvious the government wasn’t getting the job done.

This is a good demonstration of strength through American diversity.

Diversity? Hardly….Americans helping Americans in a time of need.
If one can look beyond the superficiality of modern day “diversity”, we see Americans from different walks of life bringing their talents and commitments to bear to ease suffering and save lives. No one cares about “intersectionality” etc….. that is for soft comfortable times when “me,me,me” is all that counts.

I suppose “American diversity” was not sufficiently clear. I think you and I mean the same thing.

Only if the definition is the same. Diverse backgrounds… yes… diverse education… yes…diverse paint jobs and logos on boats (including Stars and Bars)…yes…but cookie cutter superficial progressive definition of “diversity”.. afraid not.

Having lived through the “confusion” of the USA and USSR both claiming to want “peace”, parsing is everything.

Lets just agree that it is a very good thing for everyone who can help is helping by pitching in however they can.

At a time such as this, you want the guys who can still thread a line when their hands are wet and cold.
—————
Spending hours in monsoon rains doesn’t bother them, because they know ducks don’t just show up on a plate, and they’ve learned what most of us haven’t, that dry comfort is not the only thing worth seeking.

The author of that article has been sent to reeducation camp.

A variety of thoughts….

– you are on your own till help shows up
– your friends and neighbors are the best help
– the US Govt will respond when requested by responsible local Govt (comapre and contrast Blanco and Nagin vs Abbott and Turner)
– the US will show up after the local – a buddy of mine with the Tx Guard is heading home after being relieved yesterday by the National Guard
– if you work for a good company, they will help
– different parts of the country respond differently
– learn what you can about your environments
– the web has a lot of information about where you are (weather, flood, altitude, etc…) than you can understand – learn

The name Cajun Navy has a nice ring to it, and my hat goes off to all the people from Louisiana who have come to help. But of course there are fine folks from all over helping out. My good friend, who happens to be a High Tech Redneck from Arkansas, just served up BBQ to over 300 people in the Conroe area today.

I have a nephew from Shreveport who’s down there with them right now.

I think it was an ad-hoc deal where one of the guys he works with lives nearby a park which has become a staging area for some of the recovery operations. My buddy has a competition BBQ rig on a trailer, so they decided to drag it over there and smoke a bunch of meat… something like 30 pork butts and 30 briskets I think. He said they fed ~300 people or so yesterday.

I’m sure they use those too, but I think you meant to write “their personal watercraft”.

There’s some good reasons behind that. On the other hand, it’s a despicable victim that sits on their hands and waits for the government to come to the rescue.

Bless all who help others in their time of need. The “Cajun Navy” and the “Cajun Gravy” set fine examples of America at it’s best.

That doesn’t mean a lack of appreciation for all the others who are doing the same kinds of things. As the song says: “Bless the all, the long and the short and the tall…”

We love our friends from French-speaking Deep East Texas…!!!

So proud of these great patriots; this is America as I know and love her.