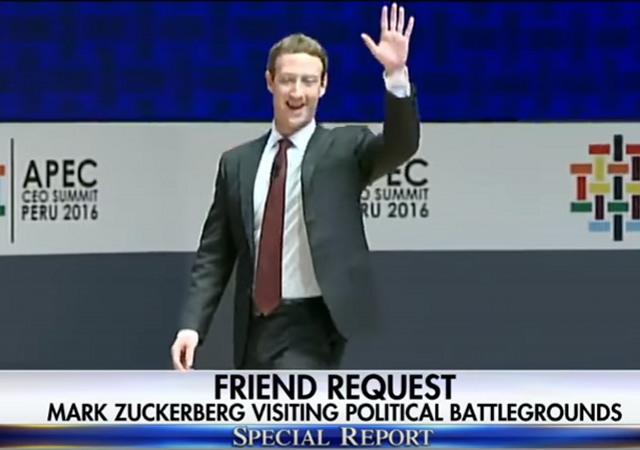 Facebook founder Mark Zuckerberg is traveling the country, meeting with American workers, and doing other things which signify an interest in running for office. This includes hiring failed Democrat presidential candidate Hillary Clinton’s pollster to work at his charity organization. Nothing is official yet but people are talking.

The photos on Mark Zuckerberg’s Facebook feed the last few months make him look less like a Silicon Valley CEO, and more like an Iowa Caucus contender.

So is the Facebook founder angling to become commander in chief?

He’s certainly crossing some candidate rituals off the to-do list, like posting pictures of himself eating local fare with some residents in early voting states, donning a fluorescent vest on a factory floor, and even shooting hoops with both of swing-state North Carolina’s most beloved NCAA coaches, Roy Williams and Mike Krzyzewski.

“For an engineer and business tycoon to, all of a sudden, be kind-of hanging out with regular people, it does send a lot of political messages,” said Matt Schlapp, President George W. Bush’s former political director. “This is clearly political activity. Is it just to further popularize Facebook? Or is there a more personal goal here?”

But the summer vacation itinerary that closely resembles a Super-Tuesday swing isn’t the only reason political watchers think the social network pioneer may try his hand at politics.

Zuckerberg certainly is laying it on thick with the state visits. Here are some examples from his own Facebook page: 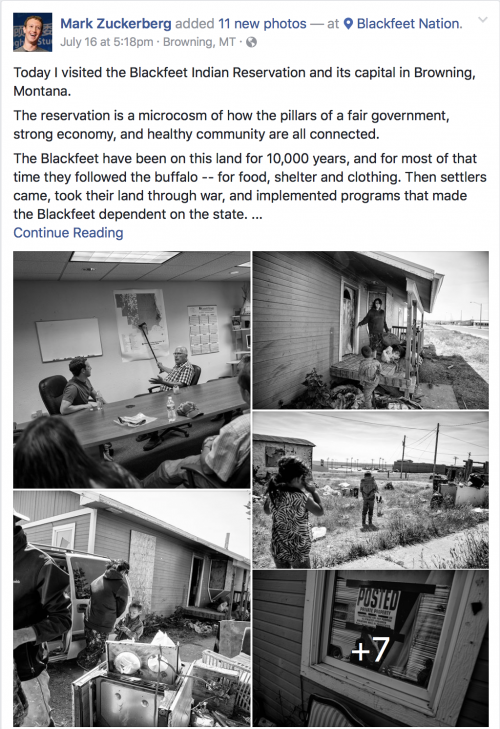 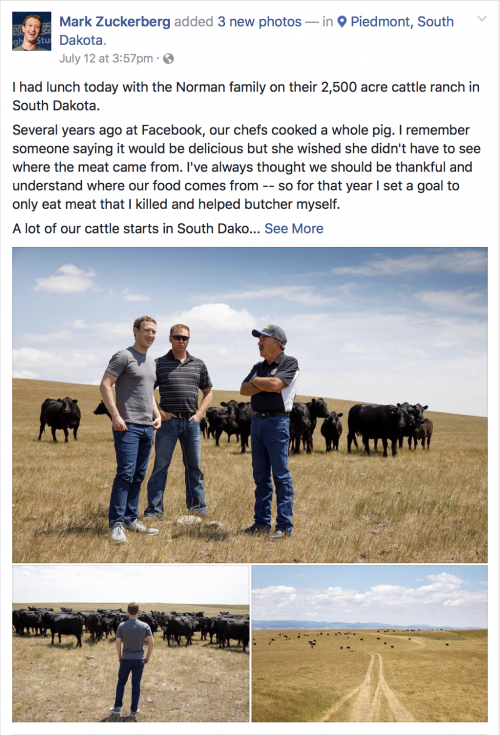 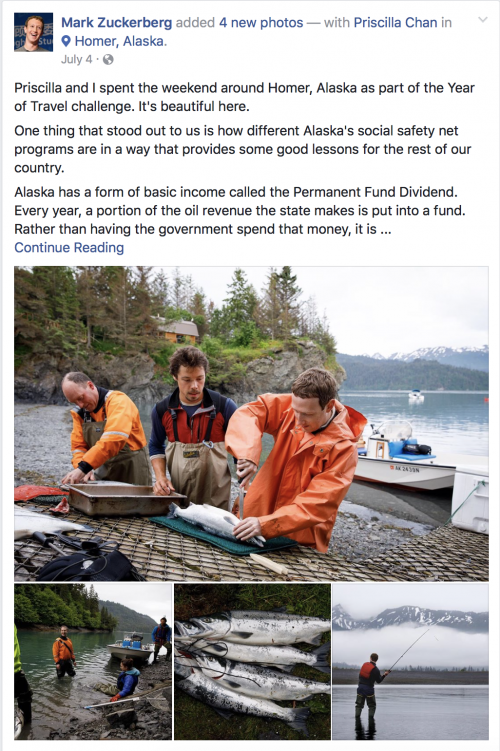 One thing is for sure. If he does run, he is going to face some stiff primary competition. Democrats had a good time mocking the GOP for having 17 primary candidates in 2016. Watch how many Democrats run in 2020.

We already have a lifelong democrat who’s an inexperienced outsider sitting in the oval office.

Been there, done that, Zuck. You’ve already lost.

And the Democrats claim Trump is a malignant narcissist? Zuckerberg has less charisma and appeal than cold oatmeal.

And then there is that obvious anti Zuck bumper sticker. Rhyming is “good” in rap “music” but maybe not for a candidate.

and what happens when someone posts on their facebook page that they are voting for the other guy? What if they post things they hate about ol’ Zuck? Are they banned?
If he does this, he needs to be VERY careful about the optics of owning/controlling a social media hangout while running. Trump had to do a lot of divestment of property once he won. but he did not own a means of communication – that is a whole nother kettle of fish

” Trump had to do a lot of divestment of property once he won” Yeah, he divested everything he owned on Mars.

You forgot the accompanying artwork hitting the streets:

Makes no sense. Vanity run. I could see him teaming up with Cuban to bankroll Clooney or the Rock. The left is just sure Trump musta won b/c of his TV show… not his message, but whatever.

As if his hired pollster will give him the real scoop of what people think of Zuck.

From the wikileaks Podesta emails, Podesta told them to oversample dems. So the dems knew; they’re just not admitting that they knew.

It’s part of their propaganda technique to dishearten their opposition by showing them their candidate is losing.

He can only run as a Dem or as some kind of independent. An independent run is the electoral kiss of death, so no worry there. And the DNC will never let him run as a Democrat; he’ll be Bernied for sure. The Dems don’t want a President who has money; they want a President who wants money and is in a position to get it. And they can all happily ride his coattails while he does.

I guess you missed the memo. Trump ultimately took in a lot of money.

Every regulatory change is about money. One example: All of the fish in the Adirondacks died because of acid rain. A regulation that forced coal firing power plants to install scrubbers cost money. Rolling back that regulation will make money for investors and rate payers, but it will cost Adirondack tourism and the local property values.

It is always about money.

BTW, Trump’s Washington hotel was languishing before he won. Now it is fully booked. Trump is making more money from being President then DNC could ever dream of.

Trump ran as a Democrat? Gosh, I guess I did miss that memo.

Remember: when you argue with a fool, you then have two fools arguing.

Hiring Clinton’s pollster because that worked out so well for her?

Mark Zuckerberg should read Bernard Devoto’s “The Course of Empire,” winner of the National Book Award, to learn more about the Blackfeet tribe, one of the most violent and belligerent, which terrorized not only white settlers (preceded by explorers and pioneers) but also other Indian tribes, including the peaceful, advanced Nez Perce.

What an ego on this guy. Maybe in his cloistered world of enormous wealth gained on relatively very little work, he’s ‘president’.

But to presidents, Contrivanceberg is no president. (except perhaps fellow nacrissist contrivance and media fraud, little barry obama.)

No joke: Zuckerberg ought to join the Army for a tour – get some real life experience under his belt. Then re-approach politics.

I, for one, welcome his candidacy should he decide to seek the presidency. He has clearly staked out a “bridges not walls” open borders policy. Be resolute in your convictions, Zuck, may I call you Zuck?, and build that bridge over the Bayshore Fwy between low income, high crime East Palo Alto and your wealthy Crescent Circle enclave. As for your own home, Mr. Zuckerberg, tear down this wall!