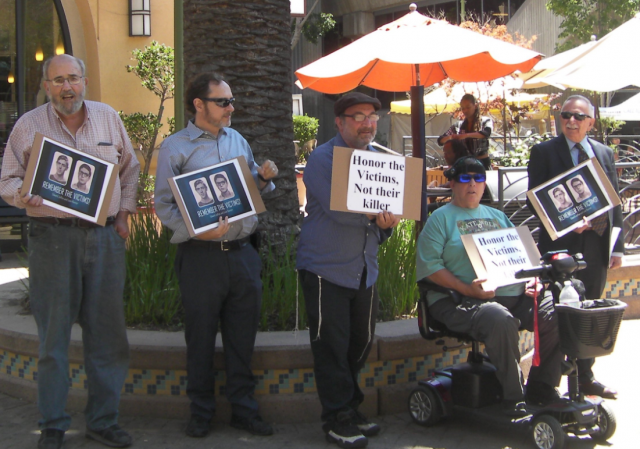 Rasmea Odeh is the former military member of the terrorist Popular Front for the Liberation of Palestine who was convicted in Israel in 1970 of the 1969 supermarket bombing that killed two Hebrew University students, Edward Joffe and Leon Kanner. She also was convicted of the attempted bombing of the British Consulate.

Rasmea lied on her immigration and naturalization applications to come to the U.S., denying that she ever had been convicted or imprisoned, or was a member of any terrorist group. On August 17, 2017, Rasmea was sentenced for immigration fraud to deportation and to be stripped of U.S. citizenship, as detailed in my post, Convicted Terrorist Rasmea Odeh Sentenced to Deportation, Loss of Citizenship.

After sentencing Rasmea again called for the destruction of Israel:

Reem’s Bakery in Oakland, CA, has a large mural on its wall honoring Rasmea. That mural has sparked protests and vigils outside the restaurant to remember Rasmea’s victims, Edward Joffe and Leaon Kanner. 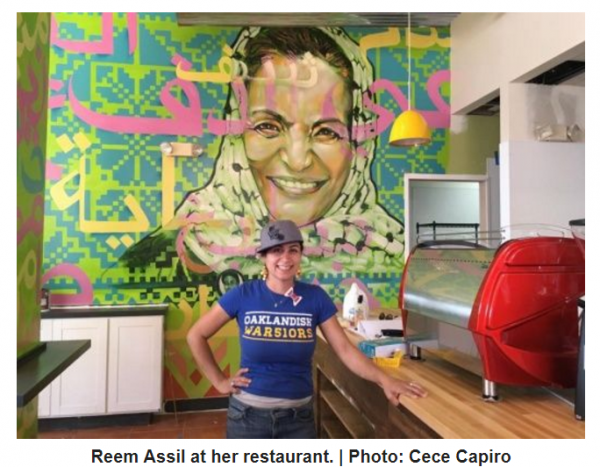 San Francisco Eater magazine and many other news outlets have covered the controversy over the mural.

Prof. Miriam Elman extensively profiled the background of the protests, and the attempts of the bakery owner to prevent the protests by asking the shopping center to remove them (which likely would violate California’s free speech protections).

Offended by the local café’s glorification of violence, for the past several months a small group of Oakland residents have been organizing protests, trying to educate the local community about Odeh’s past terror activities and the two young men whose lives she snuffed out in February 1969.

At one of the vigils, the small group of protesters—including elderly people—were physically attacked. Even when there haven’t been assaults, anti-Israel activists have tried to disrupt the protests.

They’ve also been trying to shut them down altogether.

Prof. Elman details how the protesters were attacked and had signs ripped away from them. 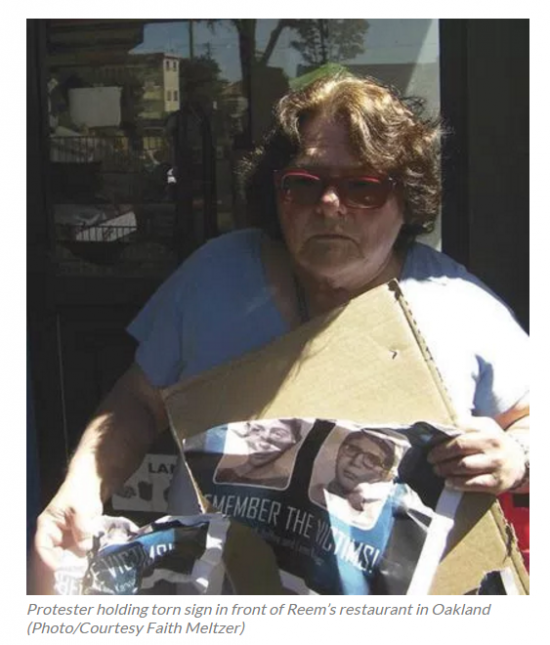 Legal Insurrection has learned that the bakery owner, Reem Assil, has filed in state court in Oakland for a restraining order against Michael Lumish and two other protesters in three separate actions.

(added) Lumish authors the website Israel Thrives, and has covered the bakery dispute. 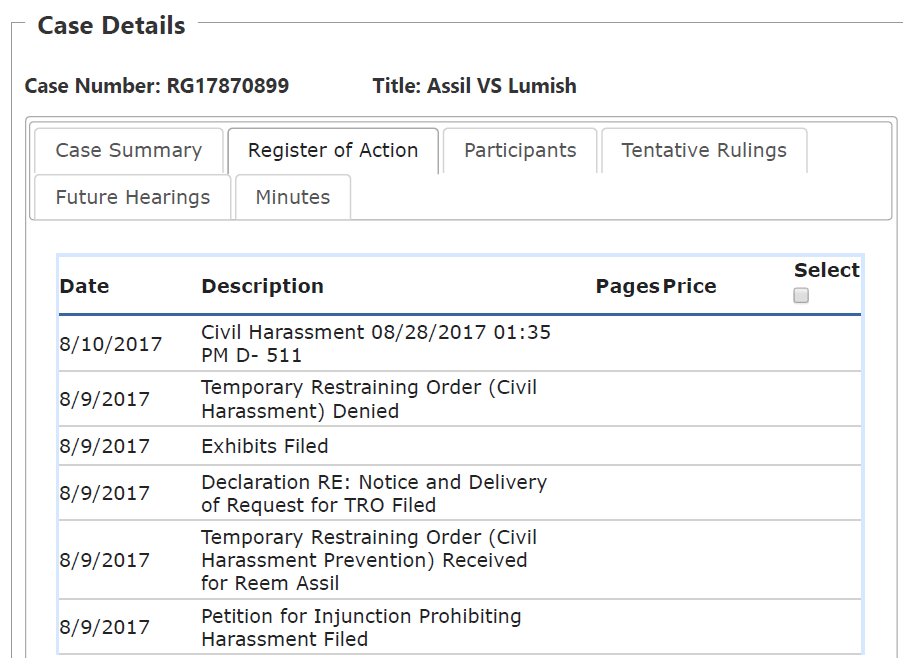 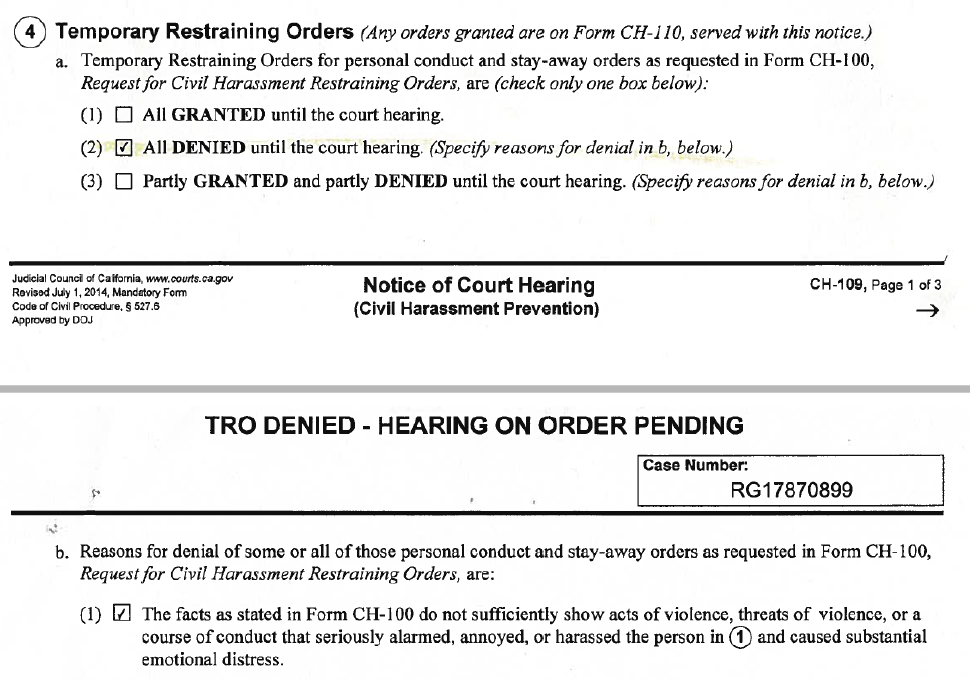 A hearing is scheduled for August 28 on the request for a restraining Order. 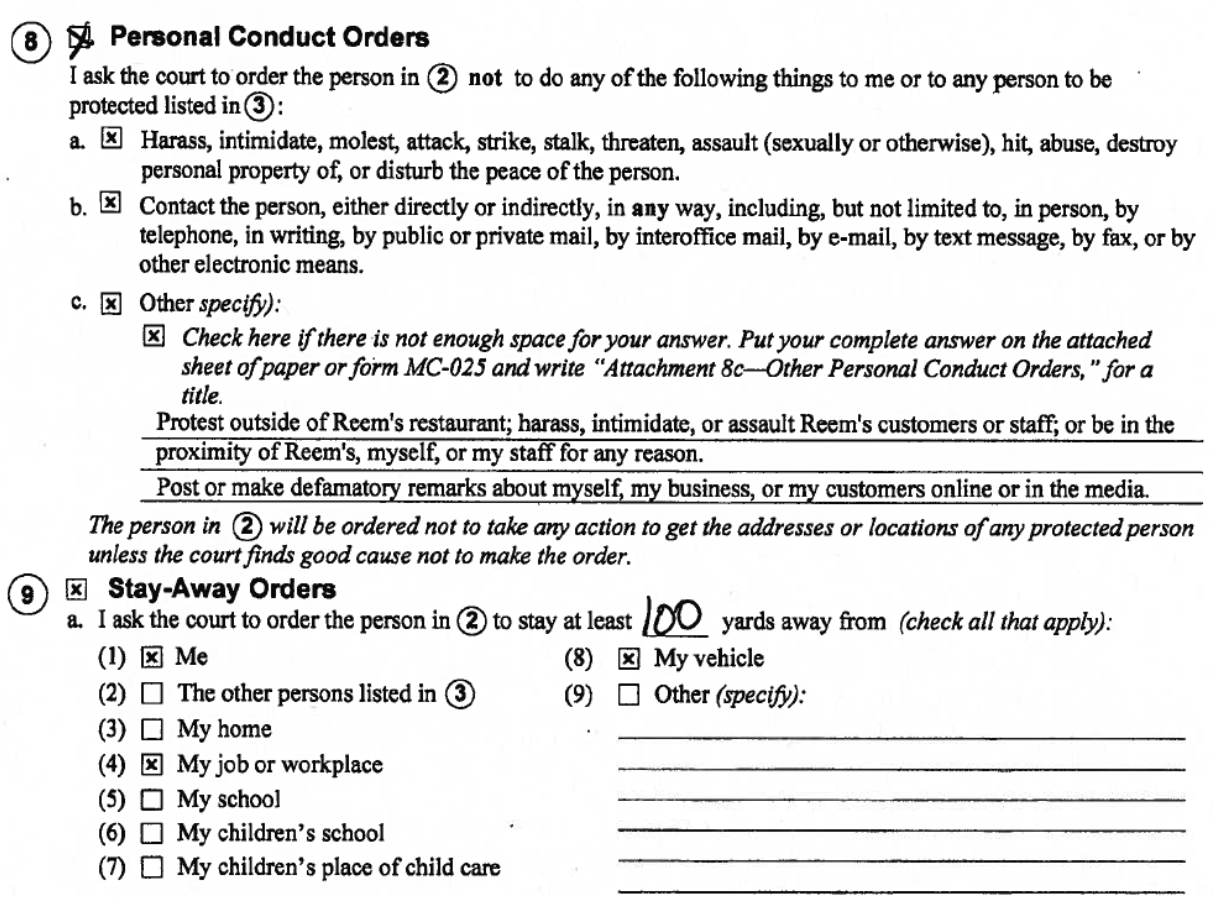 In the supporting Declaration submitted by Assil, she describes Rasmea Odeh merely as a “Palestinian woman activist” and asserts that Assil is targeted “[b]ecause of this mural and my identity as a Palestinian-American ….”

Nowhere in the text of the Declaration does Assil describe Rasmea’s terrorist background, federal court prosecution, or that the protesters have been holding vigil for Edward and Leon. (In the exhibits to the Declaration Assil attaches blog posts from Lumish and the comment sections, which do disclose Rasmea’s background.) 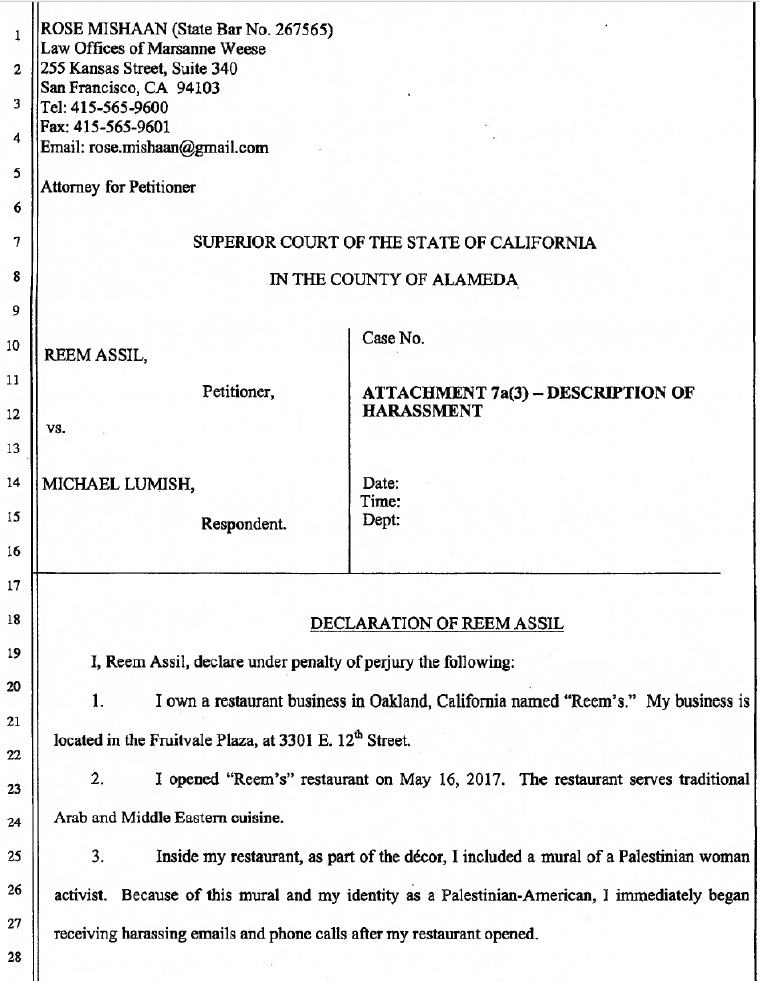 The full set of court papers is embedded at the bottom of this post.

Faith Meltzer, one of the protestors, pushed back against the narrative that the bakery is being protested because Assil is Palestinian-American, or that the protesters have been violent. Meltzer wrote in Berkleyside, The vigils at Reem’s Bakery are not about Israelis vs Palestinians, but about a symbol offensive to many:

I’ve participated in several vigils at Reem’s Bakery in Oakland, and would like to take this opportunity to clear up some inaccuracies in Carol Sanders’ August 11 opinion piece.

The vigils at Reem’s Bakery in Oakland are not about Israelis vs. Palestinians. They are not about Jews vs. Muslims, or even about the left vs. the right….

Rolling vigils have been held at Reem’s for several weeks, protesting a mural that features a convicted terrorist, Rasmea Odeh…. Two young men, Leon Kanner and Edward Joffee, were killed and nine others injured in the attacks….

Participants in the vigils at Reem’s include animal justice advocates, a local labor leader, LGBTQ activists and a former Bernie Sanders delegate, hardly the “right wing” brigade described by Sanders in her op-ed.

At the July 8 vigil a wheelchair bound participant and a 78-year-old survivor of the Warsaw ghetto were viciously attacked by patrons and employees of Reem’s. They were not “blocking the entrances.” They were standing silently with signs that stated, “Honor the Victims. Not their Killer.” Police reports were filed. This incident was documented in the local Jewish paper, The J Weekly, and by photos and videos taken by bystanders at the scene. The attackers strutted around with the signs they ripped out of people’s hands.

Reem’s has repeatedly used the Oakland Police Department to  silence the voices of those in peaceful protest. At the August 8 vigil, two squad cars and four police officers were dispatched to deal with seven protesters in an effort to deprive them not only of their right to free assembly, but their right to free expression….

The case also raises serious constitutional and free speech issues, as the bakery owner seeks to punish protest, to halt or move continued protest, and a prior restraint of speech.

What happens if Antifa shows up and protests the protesters and accuses them of being “right wing” and “fascist?”

Tattoo pictures of Ugly Odeh on their foreheads.

Of course this lunatic bakery owner seeks to “punish protest, to halt or move continued protest, and a prior restraint of speech” – look who her idol is: a murder and a fascist.

Hopefully, the judge has already seen through the ruse, which may be why the ex parte proceedings failed. Then again, there was scant evidence because the evidence of a wrong IS scant.

When the deception in the moving papers is exposed, this request should be denied, and in that event, maybe an abuse of process or malicious prosecution complaint will follow.

Better yet: more protests, until the bakery closes.

The protesters could always wear black, put masks over their faces and burn the bakery to the ground and the left would be honor bound to support them. Isn’t that the way it works in this new world?

no one owns a can of red paint ?/sarc

make sure your wearing the appropriate Anonymous Guy Fawkes Mask and keffiyeh –
or Bourekas errr burka avenger that is.

And that would differ from this just how…???
https://legalinsurrection.com/2017/08/statue-of-st-junipero-serra-appears-to-have-been-vandalized/#more-224399

Is it always wrong to treat people by their own standards rather than yours? To treat them as they would not hesitate to treat you?

Yes, I understand, slippery slope, this is exactly what antifa claim, but is the problem that they’re wrong or that they’re lying?

It’s always wrong to not live by your standards.

What a strange question.