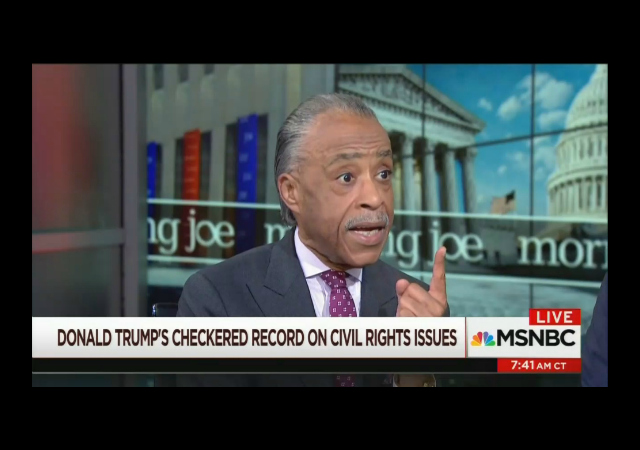 Q. How do you know that Charlottesville has caused the left to utterly lose its mind?

A. When Al Sharpton—Al Sharpton!—gets attacked by a fellow liberal for refusing to go far enough in his condemnation of President Trump.

Sharpton argued that he didn’t want to be Trump’s psychiatrist and put him on a couch, preferring instead to focus on his policies. When Deutsch continued to press his demand, Sharpton eventually had enough:

“Wait a minute, Danny [sic]: I’ve been fighting this all my life.”

Sit back with plenty of popcorn handy, and watch Donny try to out-virtue signal Sharpton.

AL SHARPTON: He has played on divisiveness. He’s played on the part of New York City racial politics that defeated Dave Dinkins.

SHARPTON: No, I’m not. The reason why I think you trivialize is it —

SHARPTON: The difference is I don’t want to put him on a couch and deal with his psychological personal problems.

SHARPTON: I think that you minimize —

DEUTSCH: I think you maximize.

SHARPTON: I think you trivialize it, because you make it Donny or Al against Donald.

“Damn it all, Al, can’t you just say Trump’s a Nazi so we can all go punch him?”

I seriously think that’s where all of this is going: The Left stopped being about policy or fixing problems a long time ago. Now they’re just looking for Nazis to punch — or witches to burn.

And they’re going to keep getting crazier and crazier. They’ll be openly calling for a coup by the time 2020 gets here.

Some of them already are.

These idiots wonder why things like Charlottesville happens when they are out there inciting racial hatred 24/7 to the point of making sh1t up in their minds (and then selling that as news!).

These clowns are doing nothing more than guaranteeing Trump is in the White House for 8 long cold and bitter years (for them!).

Donald J. Trump was a civil rights pioneer, and Bill Clinton had to be shamed into withdrawing from an all-white golf club.

In 1997, Trump purchased his Mar-a-Lago estate in Palm Beach, Florida and converted it into a private club. Under existing law, Jews and blacks were not allowed.

Trump asked the town council to lift the existing restrictions on the club, and when they refused, filed a $100 million lawsuit alleging the town was “discriminating against Mar-a-Lago, in part because it is open to Jews and African Americans.”

This probably should be seen in context. In the 1990s Bill Clinton was knowingly golfing at a whites only club, as a member, and was shamed into withdrawing.

Al Sharpton is old enough to know about this.

Valerie: In 1997, Trump purchased his Mar-a-Lago estate in Palm Beach, Florida and converted it into a private club. Under existing law, Jews and blacks were not allowed.

That is false. There was no law in 1997 requiring that a private club exclude Jews and blacks.

Read the link. Your statement is false.

“…The culture clash began to approach a climax last fall, when Mr. Trump’s lawyer sent members of the town council a copy of the film “Guess Who’s Coming to Dinner,” a film that deals with upper-class racism. Mr. Trump then approached the town council about lifting the restrictions that had been placed on the club. He also asked some council members not to vote on the request because their membership in other clubs created a conflict of interest.

Last December, after the council refused to lift the restrictions, Mr. Trump filed a lawsuit in U.S. District Court in Palm Beach, alleging that the town was discriminating against Mar-a-Lago, in part because it is open to Jews and African-Americans. The suit seeks $100 million in damages.”

This was likely a city ordinance. Ordinances are laws.

Valerie: “Mr. Trump then approached the town council about lifting the restrictions that had been placed on the club.”

Nothing in those restrictions concerned not allowing Jews or blacks.

Valerie: This was likely a city ordinance. Ordinances are laws.

There was no such ordinance, nor would a segregation ordinance have been lawful in 1997.

Valerie, when you argue with a fool, you then have two fools arguing.

Sharpton is a lot of nasty things, but being an idiot is not among them. He knows the left is charging blindly toward the edge of a cliff and Big Al is smart enough to know there’s no money at the bottom.

Al also knows that his ability to say anything he wanted to about President Trump ended when his buddy Barack left office and his all access pass to the White House expired.
Al knows that if he pokes the tiger too much he’ll get mauled…

The president places Americans, black, white, brown, whatever, first. He is neither a color supremacist nor a [class] diversitist. Perhaps they meant American race. A body of people closely incorporated through administrative proximity and shared interests, if not always principles.

Sharpton argued that he didn’t want to be Trump’s psychiatrist and put him on a couch, preferring instead to focus on his policies.

Credit where credit is due. This is the right way to navigate politics.

What?
What race riot did Trump start?

Btw, we know what race riots that scummy excuse for anal-itch obama DID start in Baltimore, Furguson, etc.
https://www.mediamatters.org/video/2017/08/03/foxs-eric-bolling-trump-better-president-obama-because-he-hasnt-had-race-riots/217514

Barry is powerless. He’s now a very bad joke. Treat him like one.

Al is probably hoping that he can cut a deal over his delinquent taxes.

Sharpton is guilty of massive tax evasion. He doesn’t want to get indicted.