New DNA technology may show that convicted killer Marcellus Williams’s DNA is not on the murder weapon. 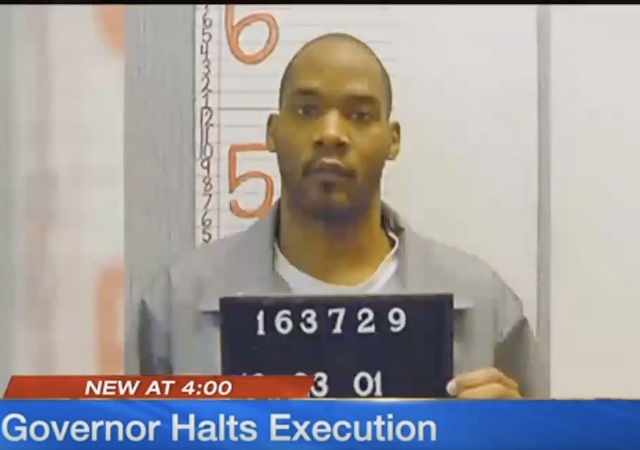 Only hours before the execution, Missouri Governor Eric Greitans granted a stay of execution for Marcellus Williams due to new DNA evidence that may exonerate him. From CNN:

“A sentence of death is the ultimate, permanent punishment,” Greitens said in a statement. “To carry out the death penalty, the people of Missouri must have confidence in the judgment of guilt. In light of new information, I am appointing a Board of Inquiry in this case.”

The execution of Marcellus Williams, 48, had been scheduled for 7 p.m. ET.

His attorneys said that DNA evidence unavailable during his 2001 trial proved his innocence.

The board Greitans ordered will examine the DNA and any “other factors before issuing a report about whether or not Williams should be granted clemency.”

Williams is on death row after being convicted of a crime in 1998:

Williams, 48, was convicted in 2001 of brutally killing Felicia “Lisha” Gayle, who had been a reporter with the St. Louis Post-Dispatch. Gayle was in her home when she was stabbed 43 times with a butcher knife, according to court records.

The state planned to execute Williams in 2015, but Missouri’s Supreme Court stayed that execution:

A laboratory tested evidence from the scene of Gayle’s killing and a DNA expert determined that Williams “could not have contributed” to the DNA found on the knife that killed the former reporter, Williams’s attorneys said. Last week, the Missouri Supreme Court rejected a request to stay Williams’s execution without explanation.

Kent Gipson, one of Williams’s attorneys, has insisted that the case against his client is weak since the major evidence against him is “primarily of statements of two jailhouse informants who claimed Williams had confessed to the crimes.” He also pointed out that the “bloody footprints at the scene did not match Williams’s shoe size and added that bloody fingerprints were never tested or compared to Williams’s fingerprints because they were lost by police.”

He hopes new technology will show that his client’s DNA is not on the murder weapon:

The DNA testing, which Williams’s attorneys said was enabled by advances in technology, formed the main argument they made in appealing to the U.S. Supreme Court.

A forensic DNA expert and biologist explained the transfer of DNA to CNN:

Forensic DNA expert and biologist Greg Hampikian, who was hired by defense lawyers, told CNN on Monday that “when you’re stabbing, DNA transfers because of restriction and force. If you’re stabbing anyone, you have a good chance of transferring your DNA because of that force.”

The analysis of DNA on the knife “isn’t enough to incriminate someone, but it is enough to exclude somebody,” he said. “It’s like finding a Social Security card with some blurred numbers. There’s still enough there to at least exclude someone.”

I’m a strong death penalty advocate, and I endorse this move.

I’m either a weak death penalty supporter, or a tacit opponent.

I believe in the state’s right to execute the worst offenders.

I don’t trust the justice system to deliver justice

Sounds like a good move by the Governor. When the man’s life is on the line, certainty using all resources is crucial.

They used jailhouse informants to convict in a death penalty case? Seriously?

Though the stay is a good idea, the lack of Williams’ DNA on the knife is not, in itself, exculpatory. There are a number of ways, gloves or wiping down the knife being obvious ones, in which the knife wielder’s DNA may not have ended up on the weapon.

We’ll just have to see where this goes.

It could well be that the passage of time and limitations on the technology are among the reasons it didn’t show.

Not sure i trust the machinations to adjudicate the merits justly….

The prosecution based its case on the testimonies of two people (not eyewitnesses) who later received a financial reward from the victim’s family during a trial where 11 of the 12 jurors were white.

BTW, there was no hair or fibers found that matched the defendant.

You don’t execute someone based on ‘It could well be’.

We don’t execute – in fact we don’t imprison based on maybe. There must be evidence pointing to guilt beyond reasonable doubt.

With what we know about the current state of our criminal justice system, I would be very skeptical of jailhouse informants and confessions without corroborating evidence.

In this case there were no eye witnesses, no forensic evidence and there was DNA on the knife handle – just not Williams’. So it is unlikely the killer used gloves and there is no chance that the knife was wiped down since someones DNA is on the knife. This guy should walk.

Am I the only person who finds the missing bloody fingerprints very suspicious? It’s possible the police lost some damning evidence by accident, but “losing” exculpatory evidence and relying on less probative evidence to convict is a time-honored tactic by prosecutors.

why was this guy in prison in the first place ?

was it for some other issue – if so then this was a bogus trial/conviction.

Good. If the state is going to take the life of a citizen, there shouldn’t be any doubts at all.

That caught my attention too! As soon as police start losing things that sets off all kinds of alarm bells!!

I’m pro death penalty, but I recognize that the judiciary is incredibly dysfunctional.

I’m not opposed to a stay to look at new evidence, but having skimmed the facts of the case I’m not betting the babyshoe money on his innocense. And, if he is truly guilty, he’s the type who needs to be exterminated.

The level of ignorance in these comments is rather shocking. The state Supreme Court gives a synopsis of the evidence against Williams. He broke into another house in the victim’s neighborhood, then broke into her house, probably thinking no one was home. He heard her in the shower, went to the kitchen, picked out a butcher knife, and waited. When she came downstairs, he stabbed her 43 times. Later that day, his girlfriend saw blood on his clothes and scratches on his neck, and questioned him. He admitted to the murder. The GF saw the stolen laptop and the victim’s purse in the trunk of his car. She saw the victim’s ID in a wallet from the purse. Williams threatened to kill the GF and her entire family if she talked. Williams sold the laptop to a third person a day or two later. He was then arrested for unrelated charges. He was in jail for nearly a year awaiting trial, during which time he was never on the cops’ radar for the murder. He had the same cellmate for most of that time. When the cellmate was released, he went to the police and told them that Williams confessed to him, and the cellmate was able to provide details of the murder which had never been released. Cops went to the third party, recovered the laptop and that man confirmed he bought the laptop from Williams only a day or two after the murder. Cops then searched the car Williams had been using and found unique objects in the trunk which belonged to victim and which had been taken in the burglary. When cops interviewed the GF, she told them the entire story of the day of the murder. Williams was indicted for the murder, and within a few days, attempted an escape from the county jail. The current prosecutor says the defense attorneys are lying about the DNA results, and that further, it is not unusual to suspect the defendant, a burglar, was wearing gloves (or socks or something) over his hands, and that the DNA is probably from contamination dating back to 1998 when the murder was committed and cops and others did not understand the significance of DNA. Here’s the link. Read it yourself. https://www.courts.mo.gov/page.jsp?id=12087&search=Marcellus+Williams+&dist=Opinions+Supreme&n=0

From what I have seen, these convictions do not happen in a vacuum. Generally, those accused have really long rap sheets.