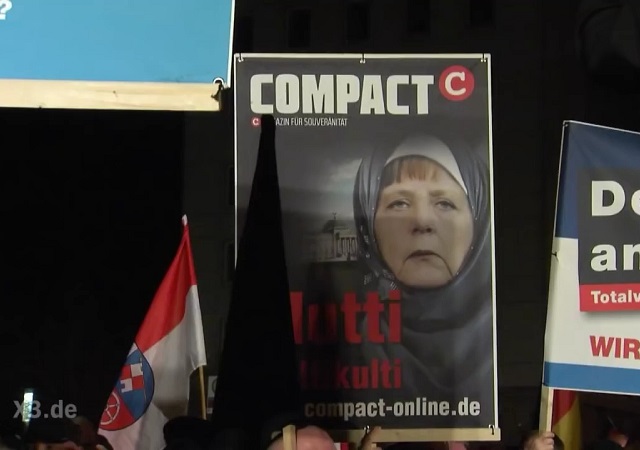 The Merkel government is apparently covering up the extent of the ongoing migrant influx ahead of the country’s general elections, a leaked police document published in German newspapers suggests.

According to the document, Germany’s Federal Police, the agency responsible for immigration and border controls, is observing “high number of immigrants” entering illegally into Germany along the country’s southern border with Austria. The Federal Police is urging the government to reinstate border controls to stem the flow of illegal migrants into the country, the document reveals.

Chancellor Angela Merkel has repeatedly rejected the idea of securing Germany’s borders. “In the 21st century, closing borders is not a sensible option,” she said in her statement to the German parliament at the onset of the 2015 Migrant Crisis. “[W]e must resist the temptation to revert to acting as nation states.”

German weekly Focus quoted sources within the police, saying, Germany’s Interior Minister had “instructed [them] not to publish the report” that could highlight the growing migrant influx, just 50 days ahead of the German parliamentary election.

The [German] Federal Police observed a “high number of immigrants” along the Austrian border, despite the closure of the Balkan route. The immigration to, and transit through Germany carry on unabated. This was revealed in an internal report on border controls ahead of the G20 Summit in Hamburg.

The twelve page document was made accessible to the newspapers belonging to the Funke Mediengruppe. According to the report, the Federal Police registered 6,125 violations of residency rights [subjects illegally residing in the country], 4,546 illegal entries, and 812 drug related crimes between June 12 and July 10. In addition to that 782 arrests were made in that time frame.

“These findings alone call for the temporary introduction of border controls on Germany’s internal borders,” the [police] report said. This would lead to “improved security”. The high number of arrests illustrate the need for “nationwide investigation and control mechanisms”. According to the [sources in] police circles, Internal Affairs Minister Thomas de Maizière had instructed [the Federal Police] not to publish the report. De Maizière wanted to avoid a debate over the merits of border controls. [Translation by author]

The latest revelation about Merkel government’s attempt to hide the country’s worsening migrant situation isn’t an isolated incident. Deception and cover-ups have been the hallmark of Merkel’s open doors policy for illegal immigrants.

“Refugees aren’t more criminal than Germans,” people were told by Germany’s Interior Ministry last summer. The same statement also claimed that “migrants hardly committed any sexual assaults and murders.” That hilarious statement was made just six months after the mass sexual assaults on the New Year’s Eve in Cologne and other German cities. Then we learned through the Germany’s official annual crime report published in April this year that there was a 50 percent spike in migrant crime in the country compared to the previous year’s figures.

According to the media reports earlier this year, Merkel had struck a secret deal with the Erdogan regime to directly fly in 150,000 to 200,000 migrants each year from Turkey into the EU, without bothering to consult other European member states, let alone European voters. Merkel and the EU bosses are backing a centralised migrant ‘relocation plan’ to settle these arriving migrants across Europe. German politicians have threatened the East European states with punitive sanctions and penalties for opposing migrant relocation.

The decision not to secure Europe’s outer borders is not a matter of logistical improbability, as it is often sold to gullible European voters, but a well-thought-out ideological position. Merkel and her political allies in Europe won’t let popular opposition or democracy get in the way of their social engineering project to ‘diversify’ and ‘enrich’ the continent of Europe with mass migration from Arab and Muslim countries.

With her 15-point lead over the nearest Social Democratic rival, Merkel is flying high in opinion polls ahead of the September election. An electoral victory for Merkel will also be an endorsement of her EU-wide Migrant Policy. Next month, German voters will not only be electing their next Chancellor, but deciding the fate of the Christian Europe.

It’s all very logical, and the German government, like any animal, is just trying to ensure its own survival.

In keeping with the liberal zeitgeist, it is fashionable for German women to spend their lives pretending that they’re German men. This decimates the population of German women willing to act like German women; and, inevitably, the population plummets. And it happens quickly—the population replacement rate can drop by a factor of eight or ten in a mere twenty or thirty years. No human society can survive that.

Without a population, one can’t have a country; and without a country, there’s no place for a government. So for its own survival, the government needs to replace the population, if not via domestic manufacture, then via imports. If the new population is not infected with the self-immolating problem of miniscule birth rates, so much the better. Muslims from Africa or the Middle East are ideal. There’s nothing even slightly liberal about them, and little danger that they’ll “assimilate” (meaning, turn into modern liberals), and so little danger that they’ll soon go the way of the Germans they’re replacing.

It makes perfect sense, actually. Closing the borders won’t fix the problem, since the problem is the German population and its strange ideas. The only fix is to throw German women out of the military, the government, the workforce, the universities, etc, and send them home. They have seroius work to do, and they’re not doing it where they are. Leave the drudgery of earning a living to the men—that’s what they’re there for.

And of course none of this will never happen. So say “hello” to the Caliphate.

“[W]e must resist the temptation to revert to acting as nation states.”

Angela dahhhling, perhaps you should ask Charlie Gard about acting like “nation-states”…Oh wait…

The comments over at Focus.de are almost exclusively against these government actions, lies, coverups, etc. Yet the Sheeple will continue voting for more of the same. It’s much easier to blame all their problem on Trump and the Americans than to actually do something.

—>Kinder, Küche, Kirche (Children, Kitchen and Church) is a German expression denoting the role of women in society.<—
no more done by Churmans but by I-Slamists,
the Caliphate proceeds apace.
Eurabia will no longer be Christians in the next 50 years and if Put[z]in thinks that Mother Russia will not have the same fate, just ask what the Chechins and I-Ran have to say about that (bad logistical thinking on Vlad the Impalers part).

Murray understates the case in focusing on whether people are okay with a terror attack now and then.

He could also have pointed to the 700+ “sensitive urban zones” in France, the carbecues and riots, the “sharia patrols” in European cities, the grooming rings in Britain, the measures that Scandinavian women have taken to avoid being treated as “uncovered meat,” the threatening and harassing treatment of non-Muslim teachers and classmates by Muslim schoolchildren, the general degradation of formerly safe cities, the official censorship of speech and images that Muslims dislike.

Any place where Muslims settle in substantial numbers eventually comes to resemble the places where Muslims dominate. That’s mainly because of the Islamic doctrine that Muslims are obligated to support the ongoing project of forcing Islamic rules upon everyone else.

It’s quite amazing to see Germany having morphed into the bizarro-world double of itself. Instead of aggression outward, Germans are turning on themselves with the historical pathology.

If there are add-ons for the devil to utilize in hell, forcing dead Nazis to watch Merkel destroy Germany would be delicious.

It truly shocks me the Germans don’t wake up.

How could anyone, ANYONE, want to live as a muslim. Such a drab barbaric world.

Kill, kill, black bags for women, no progress in science including medicine…. just nothing but really mean men.

What’s the attraction? I fail to get it. I suppose not being beheaded is a plus if you go along.

Dr. Orloff thinks she’s promoting a good idea, but it’s really horrifying, hearing it in the context of our times – and it explains Germany, obama voters, hollywood idiots,and the like —

Dr. Orloff thinks she’s promoting a brilliant idea for a better world, but what she advocates is horrifying given the context of the times – and she inadvertently explains modern Germany, obama voters, hollywood idiots and the like, and especially, why there are minor lunatics able to start World Wars during times when great nations get soft and go to sleep:

Wow, Putin gets around.

We repeatedly hear in America that immigrants are less likely to commit crime than a born citizen. It is a lie. A complete fabrication. 31.5% of Federal criminals are immigrants. The Feds carefully do not distinguish between citizen and non in the reports, but because of ICE detainers knows full well the vast majority are illegals, followed by anchor babies.
In short, immigrants commit crime at a rate 10 times that of the average American citizen.
10 times.

The German people have to be insane to re-elect the old commie sow.

Call it what you want, but there is an explanation for the German nation’s coming suicide:

Denial is not just a river in Egypt, it’s a lifestyle in old socialist Europe. And the Germans are masters.

If a person eats something that has made the last ten people to eat it sick, why are they surprised that they get sick too? Is there any muslim country that is not sick and hate filled? Why would a sane person who can use a computer not realize that islam is the same as social cancer? There is no “Middle” ground with muslims. They are ALWAYS pushing to get their way. Think about what they offer to any culture. They offer extremely high birth rates. That is it. They offer no inventions or social answers to complex problems. They offer high birth rates. Along with high birth rates comes political dominance. Merkel must know this yet she persists. Why?