With 50 days until the elections, Germany hit by another wave of terror and migrant crime

With almost 50 days to go until the German parliamentary election, the country has been hit by another wave of terror and migrant crime. On Friday, a ‘Palestinian’ asylum seeker went on a stabbing spree at a Hamburg supermarket before he was overpowered by passers-by. Despite the eyewitness account of assailant screaming ‘Allahu Akbar’ at the scene of attack, German media and politicians went into their ritualised speculations over the psychological state of the attacker. German news reports repeatedly described the 26-year-old Arab attacker as ‘mentally unstable’.

Nervous German media wants to avoid such Islamist attacks from jeopardising their beloved Chancellor’s re-election bid. “Investigating the deadly knife attack in Hamburg is best kept out of the general election campaign,” pleaded the public broadcaster Deutsche Welle. “In the case of the Hamburg attacker, there are indications that it was more of a crazed act by someone under considerable psychological pressure, where Islamism was only used as a pretext.”

Frank Tempel, officiating head of the parliamentary committee for Internal Affairs, called for better equipped psychological services in evaluating potentially dangerous Islamists. Authorities do not have appropriate resources, Temple, a former policeman and politician for the [left-wing] Die Linke party, told Deutschlandfunk. There are too few support systems that could help evaluate potentially dangerous [Islamists] and in given case contribute to de-radicalise them. [Der Spiegel, August 1; translation by author]

Not to be outdone by the clueless politician and journalists, the German retail chain EDEKA pulled the kitchen knives off the shelves from its Hamburg store in order to discourage future Jihad seekers.

The attacker, identified as a 26-year-old Palestinian man born in the United Arab Emirates and named only as Ahmad A., fatally stabbed one person and injured six others at a Hamburg supermarket on Friday before he was detained by passersby.

Prosecutors said in a statement that while he was a known Islamist, there was no indication he was a member of an extremist militant group like “Islamic State.” (…)

The suspect, a rejected asylum seeker who came to Germany in 2015, reportedly told investigators that he had developed an interest in extremist ideology before ultimately deciding “to adopt a corresponding lifestyle” two days before the stabbing.

“On the day of the act, he resolved to commit an attack with the hope that he would die as a martyr,” prosecutors added.

The suspect is alleged to have entered a supermarket in Hamburg’s Barmbek district before taking a kitchen knife from a shelf and embarking on a stabbing spree. He killed a 50-year-old man and injured several other people.

On the same day, an Algerian-born man fatally stabbed a woman and a four-year-old child in the southern German town of Freiburg. The police are treating the crime as a ‘private dispute’. 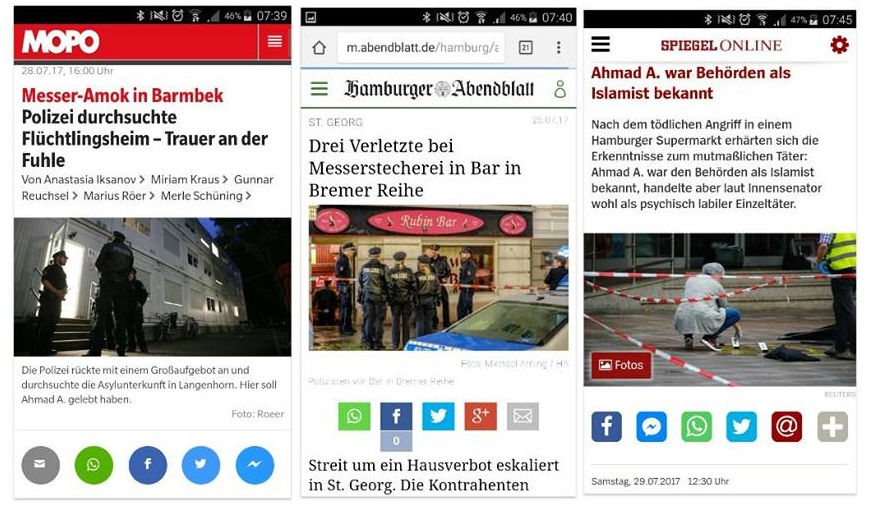 Later on Sunday, an Iraqi migrant opened fire using an M16 rifle inside a nightclub in the southern German city of Constance, leaving two people dead and several injured.

Police in Germany’s southwestern state of Baden-Württemberg said the 34-year-old alleged perpetrator of Sunday’s pre-dawn shooting had died of wounds after leaving the nightclub and ending up in a shootout with officers.

A terrorist motive was ruled out by a police spokesman, who said the incident appeared to have been a crime of passion by a sole perpetrator.

The bouncer of the establishment was killed in the attack, in which an M16 automatic rifle was used.

Three other persons inside the venue had been injured as well as a police officer hurt during the later shootout. The officer’s wounds were not life-threatening, police said. (…)

The alleged attacker was a man of Iraqi Kurdish descent who had come to Germany as a child in 1991 and was not himself an asylum seeker, prosecutors said on Sunday. [DW News, July 30]

But don’t expect these recurring waves of Islamist terror attacks and migrant crime to affect Chancellor Merkel’s re-election bid. According to a poll released by Civey research group this week, Merkel now has a 15 point lead over her Social Democratic rival and may well secure an absolute majority with the backing of her traditional Liberal Democratic coalition partner, FDP.

Alternative for Germany (AfD), the only political party challenging Merkel’s open doors migrant policy, is pegged below 10-percent mark. The latest poll numbers are consistent with the trend in recent months. AfD spokesman Jörg Meuthen is more upbeat about the electoral outcome and maintains that his party could get up to 14 percent of the votes in the September election. However, even this best case scenario does not fully rule out a fourth term for Merkel.

Late last month, Merkel refused to put a cap on migrant intake and promised to keep Germany’s borders open if she wins the election. “As far as an upper limit is concerned, my position is clear: I will not accept it,” Merkel told German reporters.

Next month’s German election is first and foremost a referendum on Merkel’s Migrant Policy. By giving Merkel four more years, the German voters may well be sealing the fate of their country, if not that of the entire Christian Europe.

The German people could use a Wall against Fuhrer Merkel and her Axis allies.

Arab attacker as ‘mentally unstable’.<–
which followers of the 'religion of Peez' are not ?
when will the Chermahns start banging their heads on the floor towards Mecca 5 times/day be a requirement for citizenship ?
will UNRWA decide that this almost martyr's family is eligable for a stipend from Ramallah ?
Abu Mazen is awaiting an answer from the OOM.

I guess you could say all the Islamic terrorists are mentally unstable. It’s an excellent excuse and hard to argue that a maniac that blows himself up or stabs people at random is mentally stable. On the other hand, why would you accept into your country so many violently mentally unstable people?

IMO It’s suicide from WWII guilt together with Freudian primal death instinct. But Merkel ought to just hang herself for guilt and not her whole country.
Islamists are so pleased. In centuries past “Religion of peace” warriors had to try to invade with armies. Now they’ll get it practically handed to them by soft-heart super-suckers.