Judge Kills Suspect Who Shot at Him Outside Ohio Courthouse

Judge Kills Suspect Who Shot at Him Outside Ohio Courthouse

“With all the nuts running around, I encouraged him to get a weapon.” 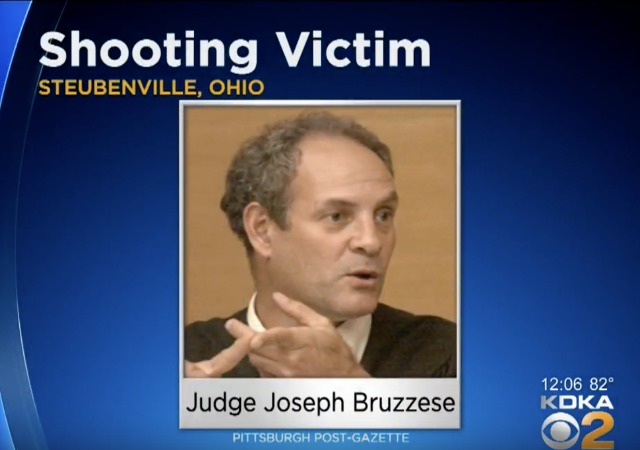 As Washington Examiner reporter Salena Zito tweeted, thank God he was carrying! A man opened fire on a judge outside of a courthouse in Steubenville, OH. The judge took out his gun and fired back. He killed the suspect.

The suspect was Nathaniel Richmond, the father of one of the Steubenville High School football players convicted of rape.

Authorities still do not have a connection to the rape case though. The Steubenville rape case caught national attention back in 2012. Richmond’s son Ma’Lik left a juvenile detention center in January 2014 after serving 10 months of a year long sentence for the rape of a 16-year-old girl at a party.

According to Sheriff Fred Abdalla, the shooting suspect arrived in the Court Street Alley next to the Jefferson County Courtroom just after 7 this morning.

Sheriff Abdalla says the shots were fired at approximately 8 a.m.

Judge [Joseph] Bruzzese shot back, and a probation officer behind him shot as well, ultimately taking the suspect down to the ground and killing him.

The judge is currently in surgery in Pittsburgh, and the passenger has been released.

Officials have announced that Judge Bruzzese is out of surgery and doing well.

They do not have a motive, but the “suspect has a criminal record and a Steubenville address.” From The Washington Post:

“This individual laid in wait for our judge,” Abdalla said, tearing up during his remarks. “It just hurts. First thing on Monday morning, you have a judge shot in front of his courthouse … This was an ambush and an attempted murder on our judge.”

During additional remarks to reporters Monday afternoon, Abdalla described Bruzzese as an avid hunter and sportsman. The sheriff said that years earlier, he had urged Bruzzese to carry a weapon with him for protection due to all of the “nutcases” around the country.

“With all the nuts running around, I encouraged him to get a weapon,” Abdalla said. “And he did.”

According to Abdalla, the attacker approached the courthouse early Monday morning in a car with another person before leaving and returning. When the shooter saw Bruzzese, Abdalla said, he “jumped out” of the car and ran over to begin shooting.

The authorities do not consider the person in the car a suspect or accomplice. The person told them “that the shooter had only said he had to be in court Monday morning.” He never left the car.

No mention of the skin color of the shooter but, yup, if you follow the link, he was black alright.

In the old days…”see one drunk Indian… see ten drunk Indians”…sadly “See one Black criminal, there really are 10 Black criminals). This is a disaster for this part of the community. Was he a full time father or just around once and a while….that is the question…

It is such a shame that we naturally assume the shooter was black without any other knowledge. It’s even worse that in this and what seems like just about every other case the assumption turns out to be correct. What’s tragic is that the black community and to many Leftists blame the white people for this situation ensuring this problem will never go away or diminish.

It’s painful to see that a site supposedly involving thoughtful individuals can have so many bigoted respondents. When a suspect is of a despised (by these folks) race or nationality, his origin is immediately raised and vilified. And if he’s white there’s no notice of that fact (unless you’re a BLM type, in which case the same rule, but different focus applies) , and people immediately slip into a much more tolerant mode, except for a passel of regret that they can’t blame some ethnic group.
If you must blame blacks for all the troubles in the world, you might notice that there are a whole lot of whites who produced the Black American predicament within which Blacks find themselves immersed. And despite that, the vast majority of Blacks are loving, law-abiding, productive citizens. But preconception, as with prejudice itself, never fails to erupt whenever the opportunity arises to show one’s underlying primitive origins. “Homo Sapien” was clearly a misnomer by taxonomists.

Well said. WE are better than that. We are the folks that judge individuals by their actions, not by their genes. You are [and should be] judged by the company you keep, not your genes.

Why your comment about his skin color? Did the article ever mention skin color? Was it a factor in the case? You can be conservative or liberal or fascist or communist without mentioning skin color unless it has to do with sunscreen. Please, please, please, if that’s the level of discussion go somewhere else.

Nice to see a judge delivering the swift and sure administration of justice.

Summary judgment at that. Amicus brief by the firm Colt, Ruger, Smith & Wesson.

It appears that the judge shot the ambusher, but that a probation officer is the one who actually shot and killed him. Please double-check the information.

Yeah but the judge mdid “loosen him” for the probation officer.

Now there’s a guy who understood that when seconds count, having the cops minutes away just won’t cut it.

Another criminal takes the eternal dirt nap. BZ to the judge and the probation officer!

Self-defense is deplorable. He should have gone along to get along.

This Judge probably saved his own life. At a minimum, returning fire makes it harder for the attacker, it’s much harder to hit something when being shot at. I wonder why the Dems want to disarm honest citizens…Anyone, anyone?

I for one, am glad my state, Ohio, is a shall issue state.

Now, THAT is a gavel.

[ I just wish images would imbed on this blog. ]

Good on the judge for carrying and defending himself. All the comments about delivering justice, being executioner, etc. are wrong. Defending oneself should never be viewed as delivering justice. Comments like that just make it harder to convince the anti-gunners.

Yes, the fact that he’s a judge should be irrelevant.

If the shooter murders you or me… it is just plain old murder…. Killing a judge is capital murder if I understand things. I understand your position about the “taking the laws into ones hands” but this was self defense in an attack on both a person and the “rule of law”. This looks to also be a personal vendetta. We are not yet to the Pelican Brief.

If the sheriff is being honest about convincing the judge to carry a weapon, then he should get some credit for saving the judge’s life. Nice to see a sheriff who believes in an individual’s right to bear arms. I wish all sheriffs across the country had that attitude.

Another scumbag POS we don’t have to coddle any longer. Way to go Judge.

I am very sorry that the actions of this man forced the judge and officer to defend themselves. The judge and the officer will carry the burden of killing this attacker. It is something to regret, not to celebrate.