“Many will survive, and most will not be prepared.” 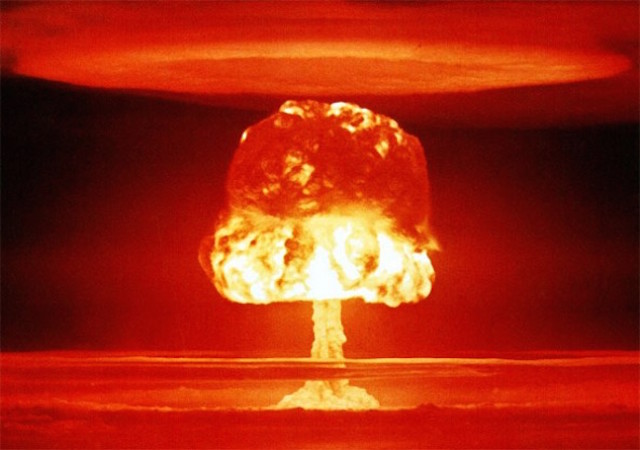 Today, I got a call from a client wanting to update their Business Contingency Plan to address fallout from a nuclear attack. This is not entirely surprising, given the escalation of North Korea’s threats against Guam and the United States.

The Millennials have long enjoyed a “peace dividend”, courtesy of President Ronald Reagan’s peace-through-strength policies, that have now been entirely spent. Perhaps realizing this, internet searches on surviving a nuclear attack have exploded in the last 48 hours.

Baby boomers, such as myself, are trying to remember our duck-and-cover lessons.

To seriously address my client’s query, I did some research and located some guides from the Ventura County Health Department that were both informative and potentially useful. Out of concerns for a “dirty bomb”, this California department launched a PSA campaign in 2013 called “Ready” that aimed to educate Americans how to survive a nuclear attack.

The accompanying brochure emphasizes, “Get inside. Stay Inside”. Stay Tuned.” The new information negates “Duck and Cover” entirely.

While the Ventura County information may prove useful for a “dirty bomb”, what are the chances for survival if a thermonuclear warhead is detonated? A recent analysis of a nuclear incident over the Bay Area paints a grim picture:

…First, there would be an explosion — a fireball roughly a third of a mile wide with temperatures equal to the surface of the sun. A blast wave would knock down most buildings within a half-mile of the explosion. A flash of thermal energy would burn exposed people within a mile of the detonation and temporarily blind those looking toward it. Up to several miles away from the detonation, there would be less severe damage, like shattered windows.

Then, there would be deadly radiation. Debris from the explosion would be sucked upwards into a giant mushroom cloud and then carried downwind. This would be the threat that concerns most of us: Falling particles the size of grains of sands sprinkling down across the Bay Area would emit gamma rays that could give people severe radiation poisoning.

The most dangerous zone would be 10 to 20 miles downwind of the explosion, while some fallout could occur 100 miles away or farther, depending on the magnitude of the explosion.

Of course, dealing with radiation sickness is a major focus. Since the first nuclear weapons were used in Japan to end World War II, various medical treatments have been developed to treat the effects of radiation. Interestingly, some companies are developing innovative cell therapy countermeasures as potential options.

I suspect many contingency plans across the nation will receive an update shortly, as many state and local officials realize that the old civil defense plans need to be dusted off and revised.

The American Civil Defense Association was organized in 1962 in the wake of the Cuban Missile Crisis. It offers information on how to prepare for an array of emergencies, noting:

Perhaps one of the most common misconceptions among Americans is that if a major wide-scale nuclear, biological or chemical disaster strikes, chances of survival would be extremely low.

In reality, however, this couldn’t be further from the truth. Many will survive, and most will not be prepared.

I hope we don’t need to respond to a nuclear attack. I would suggest that it would be wise if we take some time this week to do an assessment of emergency preparedness for the types of emergencies we are most apt to experience (e.g., earthquakes), and perhaps keep a few of the tips from the Ventura County brochure in mind (like making sure you have an emergency radio and spare batteries). That may be a reasonable place to start.

Have plenty of beer, salsa and chips on hand.

Should have told them that the best defence is not to worry about stuff you can’t control. And then bill them triple time for that advice!

I recall as a kid I saw many public buildings with the yellow and black “fallout shelter” signs on them. I didn’t know what that meant so I asked my mother, who explained it to me. Off course those signs have been gone now for quite a while – wouldn’t be a bad idea to bring them back.

My plan: don’t live near a target.

Which is also how I handle threats from terrorists, criminals, and liberals.

Will the topless dancers show up for work after the attack? I don’t want to waste gas driving there to find out. And how long will the beer cooler stay cool after the grid goes down.

I’ve been reviewing the plethora of YouTube videos on nuclear testing from the early 50’s that were declassified in 1997.

Actually, from the videos, it all comes down to staying out of the way of the shockwave, especially for a high altitude air burst. Stay to side of the shockwave .. behind a wall etc.
If caught outside, even a large tree can provide some level of protection from the shockwave.

Secondly, the bright light (with X-rays and gamma rays) tends to make stuff ignite. Remove anything that could possible catch fire from around your home (garbage etc).

Lastly, seal your windows and stay in side your home for at least 48 hours, while the highest radioactive fallout decays. If you do go out, wear something that your can throw away when you get back in.
Simply the dust is radioactive and you have to keep it off of yourself. Exposure of more than a few minutes is bad.

I love this map – it is kind of fun to blast places and see where you live and targets around you and what you need to be aware of. It does NOT take into account being downwind of the blast, but I know my upwind locations as a matter of everyday “my weather ALWAYS comes from the west”, location of mountains etc. You can pick actual bombs used, or just designed.
http://nuclearsecrecy.com/nukemap/

My advise? Load your phone up with tunes from the fifties, strap on you PipBoy, then take Dogmeat out for some fun plinking molerats.

Produced by scientists at Oak Ridge.

I think we will only have to survive the hype and hysteria over all this. Some will short some stocks and then cash in. Others will run up gold prices and do like wise. It’s the 1950s and 60s all over again.

We had the principal of an elementary school near the Seal Beach Naval facility ask what the school could do in preparation for nuclear attack. We said “nothing”…. being so close to the weapons storage … no worries…. the true test is holding a marshmallow on a stick in the air and see if you can get the toasted marshmallow in your mouth before you’re vaporized.

As soon as you see the flash, drape your body with one of the leftist trolls we occasionally have on hand here.

I’ll be selling yellowsnakeskin (trademarked) by the gram. It’s valuable for something after all!

What would I do to prepare?

For avoidance of both blast and radiative effects, the Inverse Square Law is your friend.

People have long mocked the “Duck and Cover” cartoon from the 50’s, with the implication that it’s ludicrous to think that taking cover would protect you from a nuke because you’d be vaporized no matter what you did. But this attitude doesn’t take into account that while the total destruction zone is truly hopeless, there will be hundreds of square miles in the surrounding regions where the blast effects will be dangerous but survivable, and diving for cover when you see the distant flash will indeed help reduce your potential for injury.

Do not climb under anything…. lie beside a desk or other object… same with earthquake… lie beside bed on floor. Let the adjacent structure take the full blow.

If you live in a multistory building… moving to the upper remaining floors reduces radiation exposure after blast. Just not a top near roof.

In the early 70s we still did duck and cover plus bombing drills where we would huddle down in the tunnel between the school & church basements in New York City where I grew up. The building that I that I live here in Sweden has a bomb shelter with doors reminiscent of submarine bulkhead doors. Years ago when I checked it didn’t have emergency supplies stocked.

A little knowledge can go a long ways.

Here is an article I wrote on how to survive a dirty bomb, but the same principles apply in a nuclear bomb scenario – presuming you are not in the blast radius.

Pay close attention to my admonitions about using a meter, gas mask and other preventatives. Most of these tools require training and may not be necessary. I’d be happy to answer questions.

In 1950’s Chicago at 10:30 AM every Tuesday the civil defense sirens would blast for s minute or so. Radio and TV would air this is only a test .. instructing if it was a real emergency to tune to the civil defense channel on the radio, which was marked by a yellow triangle. As little kids we thought if the Soviet Union did launch a nuclear attack that it would occur at 10:30 AM on a Tuesday when everyone would think it was just another siren test.