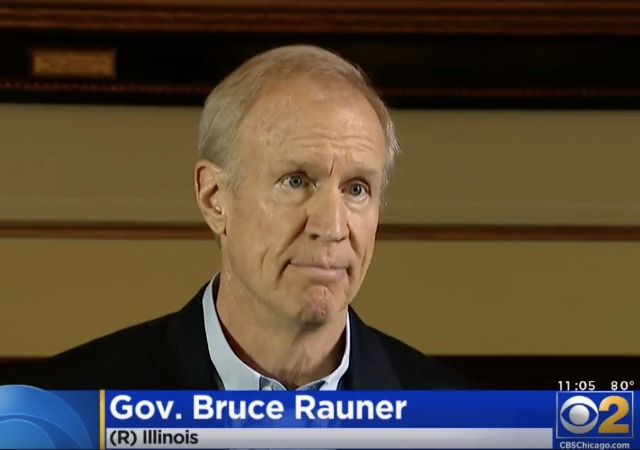 Republican Illinois Governor Bruce Rauner has vetoed the Democrat education funding bill because he viewed it as a major bailout for Chicago Public Schools (CPS). The Chicago Tribune reported:

Rauner rewrote the measure to take away a $250 million block grant that Chicago Public Schools has long received and also changed how the funding formula weights CPS pension funding when dividing up new money for schools.

“This is not about taking resources from Chicago,” Rauner’s veto message reads. “This is about making historic changes to help poor children in Chicago and throughout the state of Illinois.”

Without an education funding bill, the state government cannot write checks to the school districts. People will try to blame Rauner for this, but it actually falls on the Democrats because they inserted that provision into the state budget.

This legislation passed in May, but only placed it on Rauner’s desk this week:

Democratic Senate President John Cullerton had urged Rauner a day earlier to “do the right thing” and sign the legislation.

“Students, parents, teachers and taxpayers have waited long enough,” he said. “This is a chance to make a huge, meaningful change for Illinois.”

Rauner accused Democrats of sitting on the bill to force a crisis.

Rauner made it known he did not like the CPS part of the bill. This led Republican and Democrats to meet over the weekend to try to reach a compromise. The Democrats described the talks as “friendly,” but Republican Sen. Jason Barickman called the talks “a charade” and proceeded to accuse “his Democratic counterparts of playing political games.”

How The Bill Favors CPS

The Senate and House could override Rauner’s veto, but this would be a harder challenge for the leaders in the House and Senate. They managed to bring over some Republicans for the budget bill.

However, Republicans have seen how education funding has favored CPS over the years leaving the rest of the schools depleted. Enrollment has dropped in CPS schools, but no one has adjusted the funds out of CPS to other districts. This means CPS “is getting more state funding per pupil than their counterparts elsewhere in the state.”

In early July, I blogged about the problem with this education funding and why it favors Chicago:

Illinois Policy pointed out that “CPS is partially exempt from the” formula inside Senate Bill 1. It would also require “the state to give the district $215 million a year for CPS’s annual pension and health care costs.”

CPS would also enjoy the bill’s “hold harmless” provision, which “ensures that a district cannot receive less state aid funds than it did the previous year.”

I also blogged that pensions remain the main problem. Back in 1995, the Illinois legislature passed a law that provided Chicago Public Schools (CPS) “a certain percentage of state funds from block grants funding programs such as special education.” It also has a section that stated the state would help CPS with pension payments.

Rauner and Mayor Rahm Emanuel have pointed fingers at each other over the pensions. But as I blogged before, the favor is in Rauners court:

The Chicago Tribune stressed that within the 1995 law is only “a pledge – but not a requirement – of how much money the state would provide for Chicago teacher pensions.” The law also gave then-Mayor Richard Daley and CPS officials “great leeway in spending the district’s money, including the ability to skip pension payments.”

State funding has fallen short because as we all know Illinois officials CANNOT STOP SPENDING. The Teachers’ Retirement System only has 40% of the funds it needs “to cover future retiree benefits.” The Tribune continued:

From 2011 to 2013, lawmakers once again allowed the district to skip major portions of its pension payments. By 2013, the city teacher pension fund had less than 50 percent of the money needed to cover future retiree benefits.

Former Mayor Richard Daley and Emanuel opted to borrow and spend money on school construction and other operations instead of taking care of the pension program.

Therefore, Republicans around the state don’t think other schools should have to suffer because Chicago messed up:

“When people tell these stories about how the General Assembly didn’t keep their (pension) promise — which I agree is a bad thing … they’re also not looking at the local responsibility,” said Beth Purvis, Rauner’s point person on education.

“While other districts around the state were taxing their population to pay for schools, Chicago Public Schools was choosing not to do that and not to pay the $250 million” in extra state grant money into its pension system, Purvis said.

Hopefully someone will read the bill to the Chicago teachers and explain the big worlds.

notamemberofanyorganizedpolicital in reply to Anchovy. | August 2, 2017 at 10:48 am

It also has a section that stated the state would help CPS with pension payments. [emphasis added]

“Help” pay for pensions. Not fully fund, which is what CPS is apparently expecting.

The mistake (feature?) was also in the 1995 bill, which contained the provision that says that Chicago and CPS pledged — but aren’t actually required — to use the state grants for pensions on pensions.

Kudos to Rauner for exercising the flip side of that: those state funds are also merely a pledge, not a requirement, and can be withheld if CPS isn’t upholding its end of the bargain.

And if they haven’t after 20+ years, it’s a safe assumption they don’t intend to unless forced (and even then they’ll try to wriggle out of it).

Call the CPS bailout a “tax-money loophole” if you want. Aren’t the Dems always trying to close those? 😉

This is the most asinine thing. Politicians always leaving themselves wiggle room.

So the teachers, I guess they didn’t notice no one was socking the money away. I can hear the whining now…. But they did nothing to hold anyone accountable.

Everyone in government is getting what they want, including the school teachers. The taxpayers will be stuck holding the bag…. Public school teachers are unusually self-aggrandizing and selfish.

Are there really any school funding problems that don’t have pension costs at their root?