“Gomez was placed on the FBI’s Ten Most Wanted Fugitives list on April 12, 2017” 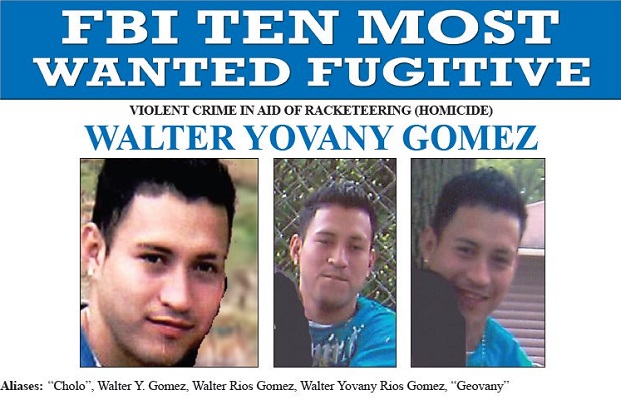 One of the FBI’s 10 Most Wanted has been arrested in Virginia.  Walter Yovany Gomez is suspected of at least one violent homicide and is a known member of the violent MS-13 gang.

FBI Ten Most Wanted Fugitive Walter Yovany Gomez was arrested without incident on Friday, August 11, 2017, in Woodbridge, Virginia, as a result of a well-coordinated investigation and tips received from the public.

On the morning of May 8, 2011, Julio Matute was allegedly murdered by Walter Yovany Gomez and a co-conspirator. Both men were identified members of the Plainfield Locos Salvatrucha (PLS) gang, a New Jersey branch of the Mara Salvatrucha (MS-13) transnational gang. Gomez and his co-conspirator allegedly struck Matute in the head with a baseball bat, sliced his throat, and stabbed him in the back 17 times with a screwdriver, allegedly because Matute was suspected of socializing with a rival gang. The co-conspirator was subsequently apprehended, charged, and found guilty for the Matute homicide.

A federal arrest warrant was issued for Gomez in the United States District Court, District of New Jersey, Newark, New Jersey, on September 19, 2013, after he was charged with violent crime in aid of racketeering. Gomez was placed on the FBI’s Ten Most Wanted Fugitives list on April 12, 2017.

You can read the initial posting on Gomez’ addition to the FBI’s Ten Most Wanted here.

We can thank President Trump and Attorney General Sessons for this killers capture. If Obama was still president, there wouldn’t be any crack down on these MS13 savages.

and maxine “lu-lu” waters & the ACLU will condemn this capture as vs our sanctuary culture in 3,2,1…

But he looks like such a nice young man…

Did the FBI let him loose if he promised to be nice?