Be sure to buy properly rated equipment and know how to use it! 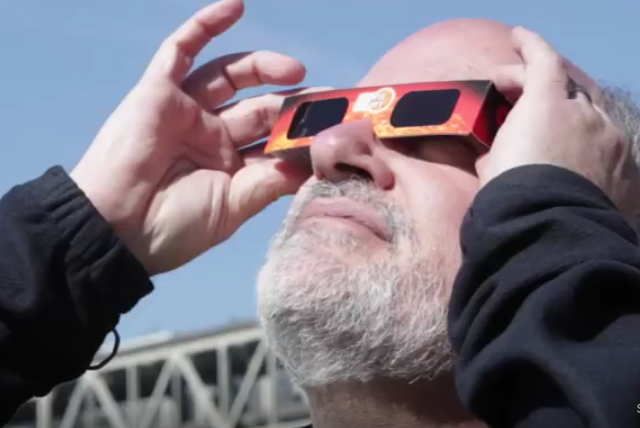 Legal Insurrection has been keeping an eye on the excitement about the Great American Solar Eclipse.

While many people are flocking to the path of totality that will stretch across 14 states in this nation, there are concerns that scammers are trying to sell eclipse enthusiasts unsafe viewing glasses:

“We should have anticipated that some unscrupulous people would try to cash in on the eclipse with no concern for public safety. It’s one thing to sell T-shirts with logos that you don’t have permission to use — nobody really gets hurt. It’s quite another to sell eclipse glasses or other types of solar viewers that are not known to be truly safe,” Rick Fienberg, a spokesman for the American Astronomical Society (AAS), tells FOX Business.

Earlier this week, AAS updated its safety advice on purchasing glasses and released a list of approved vendors in response to alarming reports of unsafe “eclipse viewers” popping up online, the company said.

“I have personally seen counterfeit glasses from China that have the logo, name, and address of a U.S. manufacturer but that were NOT produced by that manufacturer and are NOT known to be safe. They actually give a fine view of the Sun, but I have no idea if they’re blocking sufficient amounts of invisible ultraviolet and infrared radiation as required by the ISO 12312-2 international safety standard,” Fienberg says.

For those of you interested, the American Astronomical Society has issued a list of reputable vendors. The counterfeit equipment falsely claims to meet the international standard for safe solar viewing (also written as ISO 12312-2:2015).

“If you can see ordinary household lights through your eclipse glasses or handheld viewer, it’s no good,” AAS representatives wrote in their updated guide. “Safe solar filters produce a view of the sun that is comfortably bright (like the full moon), in focus and surrounded by black sky. If you glance at the sun through your solar filter and find it uncomfortably bright, out of focus and surrounded by a murky haze, it’s [the viewer is] no good.”

AAS later updated the guidelines to clarify that other lights comparable to the sun’s brightness may be visible: “You shouldn’t be able to see anything through a safe solar filter except the sun itself or something comparably bright, such as the sun reflected in a mirror, a sunglint off shiny metal, the hot filament of an unfrosted incandescent light bulb, a bright halogen light bulb, a multiple-white-LED flashlight, or an arc-welder’s torch.”

The National Aeronautics and Space Administration is encouraging everyone to review the proper way to view the solar eclipse before attempting to do so. Looking directly into the sun can cause photokeratitis (essentially a sunburn of the eye) or solar retinopathy, which can result in burns to the cells of the retina and permanent damage to your eyes.

The projection technique, using either a proper lens or mirror system (as in a telescope) or a pinhole lens, is always safe. As I recall it was invented by one of Galileo’s students. Prior to that, solar observations were done entirely naked-eye, even when viewing through telescopes. Ouch. Of course Galileo eventually went blind, though whether that had anything to do with his telescopes is not clear.

Yes, unless you otherwise know what you are doing, use projection. And allow children only this method.

If you are stupid enough to look directly at the sun to see the eclipse then Im sorry, but you probably shouldn’t be allowed out during the day even with an escort!

I used welder’s lenses for the May 30, 1984 solar eclipse. Research indicated shade #12, #13, and #14 lenses used by welders for eye protection was sufficient. I located mine and I am armed and ready.

Thank you for posting this info! Very helpful. I checked – the glasses I purchased for my family reunion are good (my mother’s hometown is in the path of totality.) The manufacturer is on your list. However I will recommend that the children in our group not look at the sun at all just to be safe. Thank you for the caution Barry.

Welcome. Thanks to TS for mentioning it to begin with.

Search the pinhole method. Easy peasy. Keep your eye on the kiddies, naturally they wish to look. It will be the next day before you realize the damage done, and it is irreparable.

You can use Welder glass shade 19 in welding helmets/masks too.