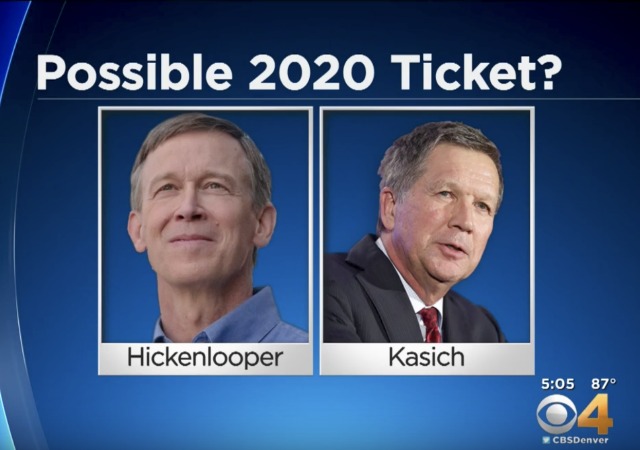 Last Sunday, Ohio Governor and former Republican presidential candidate John Kasich said that he does not have plans to run against President Donald Trump in 2020 and is “rooting for him to get it together.”

Less than a week later, reports have emerged that Kasich may team up with Colorado Governor John Hickenlooper in 2020 as independents with Kasich taking the top spot.

“The idea of a joint ticket has been discussed, but not at an organizational or planning level,” said the source, who spoke only on the condition of anonymity. “What they are trying to show the country is that honorable people can disagree, but you can still problem solve together. It happens in businesses and it happens in families. Why can’t it happen in Washington?”

Axios learned these points about a possible run with “the Johns,” as those close to them call them:

Kasich has done a lot this year that has kept his name in the spotlight. First off, he continues to appear on numerous political shows and does not hold back when he disagrees with Trump.

“And now we were looking on together in shock at some of the things Donald Trump was saying — indeed, at a lot of the things he was saying,” he wrote. “And it wasn’t just Donald Trump, mind you. There was enough bad behavior and unseemly rhetoric going around on those debate stages and at rallies across the country to suggest the death of civilized discourse and respectful discussions.

“Realize, too, that over on the Democratic side of the campaign, Hillary Clinton didn’t distinguish herself in this regard,” he wrote. “She wasn’t exactly taking the high road. She referred to half of Trump’s supporters as ‘a basket full of deplorables’ and started putting people down in order to make her point.

We are so screwed! Just what we need: a third party, and its Democrat Lite. Way too much wrong with this idea.

Please God, let this be true.

Trump will be re-elected in a landslide. 40-45 states.

Shorter Kasich: I’m to the Left of Hillary

“Isn’t that interesting,” Kasich said as the crowd around her gasped. However, without mentioning his political allegiance or correcting the voter, Kasich went on to position himself as a good compromise between Sanders and Clinton saying, “One of them’s too hot, one of them’s too cold, but I’ve got the right temperature.”
https://www.redstate.com/aglanon/2016/02/08/shorter-kasich-im-left-hillary./

That duo? What are they going to be: The flaccid ticket?

Dumb and Dumber! Hickey had a hard time winning CO and Kasich is a nut job who wants MediCare for all. Too bad that neither one can tell us how to pay for it. Their only threat to us will be with the millennials who are the most Socialistic bunch ever produced in this nation. I truly believe that they can be talked into going either Communist or Socialist with very little persuasion. Thank you public Ed and the college liberal system.

they’re going after the #NeverTrump vote…

Remember when Kerry was going to take McCain as a running mate?

LOL. We can go ahead and begin the failure analysis right now.

Kasich is a sanctimonious, self-righteous jerk who also is as boring as hell.

To quote Dice-Clay
Kasich, your ass, what’s the difference! ::o

Kasich has delusions of competence.

Kasich started out as a good governor. He had some flaws but he also had some high positive attributes. Since he faded out of the 2016 primaries though, he has been full of sour grapes. Nobody gets excited about him like they initially did when he first became governor. I don’t think his ideas even excite himself anymore. There’s no chance he could beat Trump, as an R or as an I. Wouldn’t surprise me though if switched over to D.

Indeed. He was the best candidate in the 2000 primary. But he’s changed a lot since then.

<iBut he’s changed a lot since then.

Or I have, but I’m so conservative, that isn’t likely.

The Rino Scum UniParty – it will do to the democrats what ross perot did to bush senior.

I thought Kasich was on the cusp of being appointed Postmaster General – a position that he was certainly qualified for because, you know, his dad was a Mailman.

Kinda rolls off the tongue, doesn’t it?

Everyone is being so negative – I think Kasich could easily double the support he was able to get in the recent GOP Primaries.

Which mean he has a smooth road to getting 2% of the vote.

Kasich makes me want to vomit. I can’t stand his stupid face.

What? Either Ohioans are as dumb as Kasich thinks they are or Kasich cheats at the polls.

All of this assumes in 2020 a 75 year old Donald Trump will still be President, will want to run for a second term, and will get re-nominated.

he will be.
he will and he will.

While these two bozos on a ticket together probably wouldn’t have much traction, the worrisome thing here is that such a ticket, properly constructed, would in essence be the Deep State Party. It’s primary function would be to perpetuate the deep state under the guise and attraction of bringing peace, stability and civility to our politics. It would be praised and promoted almost immediately by the media, educators, entrenched politicians, unions, civil rights groups, non-profits, entertainers, personalities, Hollywood types, and miscellaneous blind and impulsive staunch backers of the Democratic Party. Democrats and those groups have moved into a fantasy world. For all its faults and limitations the adversarial two party system is superior at identifying and rooting out fringes on both sides of the aisle and the now legions of corrupt, incompetent and unproductive hangers-on and groupies. I’d be alert for more of this political narcotic balm.

Kasich is being set up as a spoiler. He has always been represented as a conservatively moderate Republican. In fact, he is whatever he is paid to be. And, in this case, if he runs as a third party candidate, it will be solely for the purpose of stealing votes from Trump, should he run for reelection. Floating this idea now is simply to get a feeling for public reaction and if enough favorable reaction is found, to begin developing a strategy for a Kasich spoiled campaign.

Minor correction to headline: Could Kasich Team Up With another Democrat for 2020 Election?

Back when John Kerry and John Edwards were running I saw a bumper sticker which said, “Flush the Johns”. If this happens, I guess we could have some printed up.