“Young people are the future of our country” 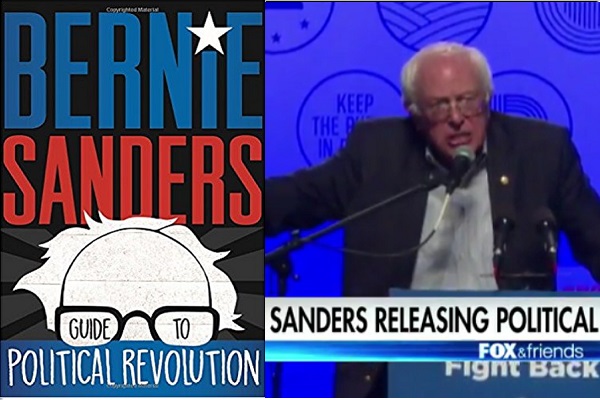 As the Democratic Party’s internal wrangling among the Obama, Clinton, and Bernie circles picks up steam, Bernie Sanders is releasing a handy-dandy handbook for teens interested in engaging in his socialist “political revolution.”

Teen Vogue first reported about Bernie’s teen manifesto, due to be released on August 29, back in May:

If you’re still feeling the Bern months after the presidential election, now’s the time to get your latest Bernie Sanders fix: The Vermont senator is coming out with a book this summer geared specifically towards teaching young people the ins and outs of political organizing and change-making.

Titled The Bernie Sanders Guide To Political Revolution, Sanders’ book is a one-stop shop for teenagers hoping to learn more about progressive causes and how to mobilize around key issues they care about. The book features helpful infographics and illustrations in the hopes of breaking down complex issues like income inequality, climate change, healthcare, law enforcement reform, prison system reform and student loan debt so that students know what they’re up against and how best to tackle these problems.

What does Sanders hope young people get from the book? He wants to help them understand how current government structure works, show them how to create change that reflects their values, inspire them to organize around causes they care about and introduce them to other resources to propel their work forward.

Bernie, who is 75-years-old, was reportedly “overwhelmed” by the support he garnered from young people on the left and apparently saw a market for his socialist ideology.

The book, designed as a how-to guide for students eager to begin work as political activists, is out on August 29th, The Guardian reported.

In a forward to the book, Sanders notes that he overwhelmingly won younger voters among all demographics during his 2016 bid for president.

Sanders also told Teen Vogue that the book will explain to a younger audience how to get involved with America’s democratic system.”Young people are the future of our country,” Sanders told Teen Vogue. “As citizens of the United States, they have a responsibility to participate in our democracy and to help create a government which works for all, rather than just the few. This book will expose them to an unusual political campaign, the excitement of politics and what being a progressive is all about.”

According to Teen Vogue, the book also includes dozens of infographics about issues like income equality and money in politics that Sanders made famous during his 2016 presidential bid.

It’s not yet clear if this new Bernie book is intended to compete with Alinsky’s Rules for Radicals, but here’s what Amazon has to say about it:

Throughout the Presidential campaign, Senator Bernie Sanders promised voters a future to believe in through his progressive platform and a vision for America worth fighting for. This vision calls for an economic, environmental, health care, and social justice revolution beyond the stagnant agendas of Democrat and Republican politicians to build an equitable future for all Americans―especially the younger generation that will inherit the consequences of decisions made now.

Inside this practical and inspiring guide to effecting change in today’s world, you’ll learn how to:
· Understand and navigate the current system of policy and government
· Work to change the system to reflect your values and to protect our society’s most vulnerable
· Organize for the causes you care about most
· Resources for further reading and organizations to get involved with

With more than two decades of Washington D.C. insider knowledge and experience, Senator Sanders knows how to fight and change the system from within, a system desperately in need of reform in health care, immigration, taxes, higher education, climate change, and criminal justice.

The political revolution is just beginning. What role will you play?

Bernie: Don’t forget how to teach them to steal too, you old fraud:

UnPlanned young people of the right diversity class who are a little 1% at the top, bottom, and middle.

Pro-Choice is a wicked problem.

Book is free, I presume.

The 1940 novel Native Son explored the attraction of Communism among the age range of what millennials are today despite their privileged upbringing. Perhaps it just a generational thing with one generation repudiating the values of their elders. But it is not a linear progression of ever more liberal or conservative values. The repudiation from one generation to the next creates a pendulum which swings between the extremes of liberalism and conservatism with any one generation falling on the arc somewhere between those extremes.

I wonder if he has a chapter extolling the virtues of the socialist revolution in Venezuela. Maybe he can convince enough young people of the wonders of socialism so that we can replicate that “economic miracle” here! Better go stock up on toilet paper.

Maybe they can try the Cloward-Piven method?

Go visit your wife in jail.

Get off the government tit and get a real job.

Bernie Sanders has no brain. At least there’s a hypothetical chance with the kiddies.

“Young people are the future of our country”

Desperately pleading for them before all the old, white Dem dinosaurs die off.

He’s a good poster child for that, I guess?

Wonder what chapter #’s will be given to:

“How To Gun Down Your Local GOP Committeeman”

Socialist with three houses sells book for $13.83. The mind boggles how anyone takes this seriously.

Remember when people used to rebel against Establishment Men like Bernie Sanders?