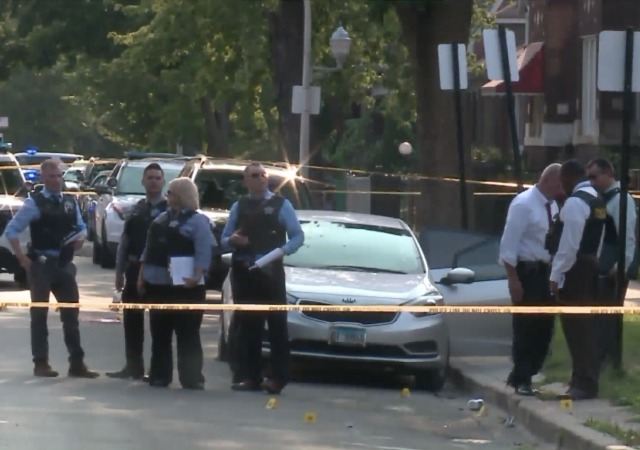 Chicago endured six homicides this weekend, which puts the city’s homicides at almost 400 for 2017. The Chicago Tribune puts the number at 391:

There have been at least 391 homicides this year, four more than last year when violence reached levels not seen in two decades, according to data kept by the Tribune.

The Chicago Sun-Times reported 394 homicides so far this year. The website Hey Jackass!, which keeps track of shootings in Chicago, has 397 homicides.

Here are the stats from Hey Jackass!: 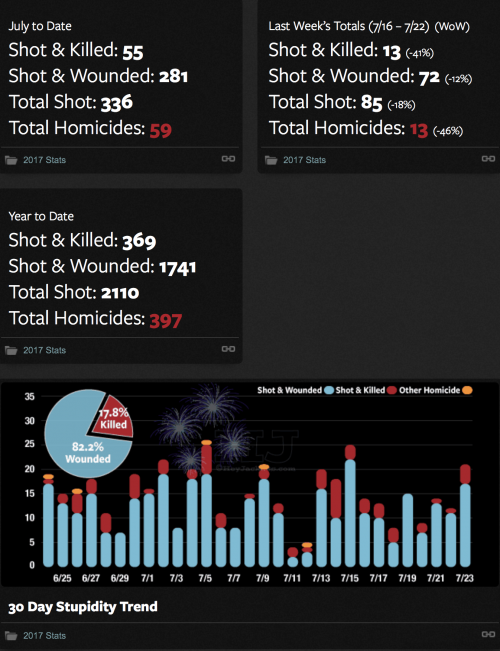 Two incidents occurred “in the 8800 block of South Eggleston Avenue:” 23-year-old Brendon Frazier lost his life on that block on Friday night. Medical personnel responded to a man shot in his ankle on that same block early Monday morning. The man claimed the shooting happened elsewhere, but the Tribune stated that people “said the ambulance arrived at the same home where Frazier lived.”

The Tribune detailed the other homicides from this weekend:

Two people were fatally shot between Sunday and Monday mornings.

An 18-year-old man died Sunday after he was shot in both legs in the 5400 block of South Damen Avenue in the Back of the Yards neighborhood about 9 p.m. Someone took him to Holy Cross Hospital, where he was pronounced dead. Circumstances leading up to the shooting were not known, but officers were checking an alley.

Three people were shot and injured on an expressway last Friday, according to the Sun-Times:

About 11:50 p.m. Friday, three people were shot and wounded on the Stevenson Expressway near the Dan Ryan Expressway interchange on the South Side. The injured were among five people in a southbound vehicle on the Stevenson, according to the Illinois State Police, which said it wasn’t clear where the shots came from. One person was shot in the abdomen and leg, another in the hand and the third suffered a graze wound to the neck and were taken to Stroger Hospital for treatment, according to the police, who said the two other people suffered cuts from shattered glass.

The incident marked the second triple shooting on a Chicago expressway in less than 24 hours.

Not only that, but Chicago has a lot of cold cases. Many of these homicides remain unsolved reported WGN News:

That number is 29%. That’s the percentage of murders solved by Chicago police last year. In other words, 71% of killers got away with murder.

“It’s a struggle and it’s a battle at the same time,” said Ebonie Martin. Her son, Deonte Hoard, was a 17-year-old Urban Prep student who died March 2, 2015.

His case is one of hundreds in police files that remain unsolved.

“At the end of the day, my son lost his voice so I have to speak for him,” she said

New York City officials have reported that the police have an 80% clearance rate. The FBI has stated that “the national average was 61%.”

Police have blamed the “no snitching” policy enforced by the gangs:

“I call it the ‘everybody knows theory…’ everybody in the neighborhood knows who did it,” said Chicago police commander Brendan Dennihan who oversees the Area Central detective division.

Parents have seen it too.

“[My son’s] case is unsolved because there’s no cooperation,” said Martin. “No one seen nothing. No one heard nothing. The guy he got shot with, he don’t know anything, don’t know who did it.”

Where was Mayor Rahm Emanuel this weekend? In Europe. James A. Gagliano, former member of the FBI’s Hostage Rescue Team and current Law Enforcement Analyst for CNN, ripped the mayor apart in an op-ed for Newsmax:

Stated purpose of said meeting was a lobbying effort on behalf of some of Chicago’s tech business owners. But let’s get real here — channeling his inner Bill de Blasio — Emanuel was seeking another tone-deaf opportunity to raise his public profile on the international stage.

And also like his Big Apple colleague, he elected to travel at a wholly inopportune time. For de Blasio, it was skipping an assassinated police officer’s memorial service so he could gather with fellow #Resistance members who opposed President Trump’s visit to Hamburg, Germany. And for the Second City’s mayor, it was a self-absorbed trip across the Pond ostensibly to raise his Q Score. Why else choose this moment in time to continue his bromance with London Mayor Sadiq Khan and pad his social media photo collection on stops to Berlin and Milan? Was he not aware of the unrelenting gang violence in Chicago and its otherworldly homicide statistics suggesting not an epidemic, but a pandemic of violence reminiscent of a warzone?

Despite years of efforts to try to deal with the situation, I think it is time we start considering… unconventional approaches: I desperately want Trump to troll the left and ask our friends the Russian to send peacekeepers to the south side of Chicago to help quell the violence.

Why the focus on Chicago? There are a dozen cities with even worse murder rates.

Also, the focus on Chicago comes mainly from the fact that it is a deep blue anti-gun stronghold which very strongly shows why gun control is detrimental to the safety of the law-abiding.

Baltimore is way ahead per capita.

In raw numbers, Chicago has more murders than any of those, but that’s out of a much higher total population.

There does appear to be some common threads between these cities…

Chicago has a larger overall number. But your right, Go north to Milwaukee and you’ll find that the homicide rate per capita is worse than Chicago. But Milwaukee isn’t nearly as big a city as Chicago is and certainly less well known. Chicago grabs headlines. The Milwaukee PD has their hands tied with Obama era Federal paperwork proving their contacts are not racially profiled. The MPD also cannot chase criminals in cars, so now there are rolling drug houses in the bad parts of town. Younger kids are recruited to hold drugs for the dealers so the dealers have a plausible deniability since no one wants to prosecute a minor with anything serious. And all this stems from Mayor Barrett’s lack of leadership.

Chicago has a very large Latino population. Watch for turf wars between the black gangbangers and MS-13 in a few years. You haven’t seen anything yet.

There have been at least 391 homicides this year, four more than last year when violence reached levels not seen in two decades, according to data kept by the Tribune.

Differential versus the same point in the previus year.

Read the article before commenting. “There have been at least 391 homicides this year, four more than last year”.

Dammit. I wouldn’t consign my worst enemy to this h#ll.

One of the reasons for the differing homicide rates is dependant on dept working homicide … Example if a homicide happens on one of the freeways its not a city homicide it falls under state police … Still in city but CPD doesnt claim it …. HEY FOLKS ANOTHER GOOD CHICAGO BLOG IS SECOND CITY COP … It gets into a lot of the political issues that are behind the crime in chicago … Its mind boggling

Oh and Hey Jackass now has total at 401 homicides …. This story must have been written this morning

Make use of a firearm in the commission of a crime a federal felony punished by 30 years in federal prison.