Will next month’s total eclipse cause interstate gridlock?

Will next month’s total eclipse cause interstate gridlock?

Facilities catering to tourists that lie in the “path of totality”are cashing in. 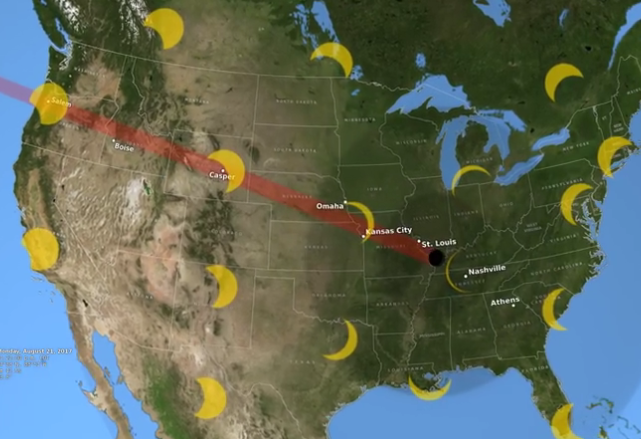 Late last year, we reported that there will be a total eclipse of the sun that will be visible throughout a good portion of the United States on August 21.

As the date of that event draws near, transportation officials are gearing up for potential gridlock along the interstate that may occur because of skyward rubbernecking.

The eclipse will be visible in 14 states, and FHWA estimates that over 200,000,000 will be within a day’s drive from traveling into the phenomenon’s path.

“That is a lot of people with potential to be out on the roads,” Martin Knopp , an associate administrator at the Department of Transportation, explained during Wednesday’s meeting.

Knopp said the states in the eclipse’s path are preparing their highways for the heavy traffic. They will even pause summer road construction.

Without any real way of knowing how bad the traffic will be in those 14 states on August 21, Knopp went advised that eclipse-goers try not to travel on the day of the event.

“It’s not a time to just show up and on the spur of the moment … pull over and watch it from the side of the road,” he said.

On the summer solstice (June 21), National Aeronautics and Space Administration officials gave a safety briefing related to the anticipated crowds clamoring to get to national parks for the best viewing of the rare event.

The sun will disappear for about 2½ minutes, beginning in Oregon about 10:15 a.m. local time and continue for about 30 minutes.

Facilities catering to tourists that lie in the “path of totality” (between Oregon and South Carolina) are already cashing in on the eclipse.

One town in Kentucky has a designated eclipse coordinator. Campsites in Oregon were booked in 90 minutes. To meet the demand, some people are listing rooms on Airbnb that cost more than $2K a night.

“We are in a unique position to provide a one-of-a-kind experience for astronomy enthusiasts,” Sangita Woerner, Alaska Airlines’ vice president of marketing, said in a press release. “Flying high above the Pacific Ocean will not only provide one of the first views, but also one of the best.”

The flight is scheduled to take off from Portland International Airport in Oregon at 7:30 a.m. local time on Aug. 21. It will head out over the Pacific Coast for an early view of the total solar eclipse, the first to barrel coast to coast across the county in 99 years.

The airline isn’t selling tickets to its high-flying viewing party. Seats are available by invitation only to a select group of astronomers and guests. But Alaska Airlines will give away two seats as part of a marketing promotion beginning July 21 on the company’s social media outlets.

There are six especially fun spots that will be having viewing parties.

So, plan now for where you want to see the eclipse…and don’t forget to view it safely!

I suspect the left will find a way to blame the eclipse on President Trump, or Russian solar hackers, possibly both.

Booked rooms for a family reunion in Albany OR (where my mother is from) a year ago. They were hard to get then – I can’t imagine now! My cousin said farmers were trying to rent out their fields as campgrounds but there aren’t enough porta potties available – in the state.

It’s cool though – both sides of the Schultz family will be together to watch the full eclipse! I’m excited! Hope we all have safe travels.

I live in that totality line… so I will see a total eclipse from my home. I really wonder how dark it will get.

It gets dark enough to fool chickens into roosting.

Just watch. Globull Warming will cause it to be cloudy over the path of the eclipse, and Algore will make a movie about it: An Inconvenient Cloudiness.

I know that many private pilots are planning to fly to where they can see the totality. Some of them want to be in the air at the time.

With society collapse? Do I need to buy dehydrated food or just more ammo.

There’s never a good excuse to not buy more ammo!