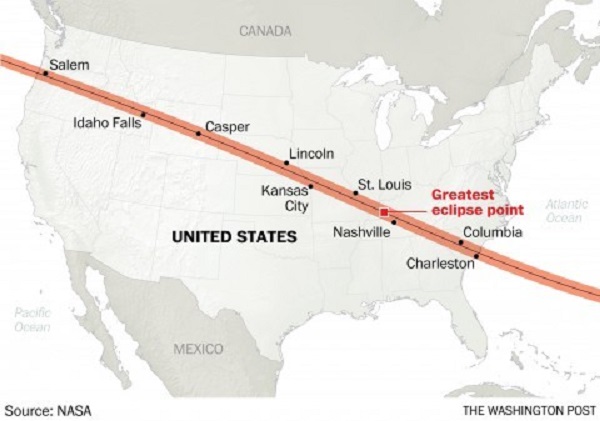 Don’t say you weren’t warned: Aug. 21, 2017, “may turn out to be the most popular vacation-day request in history,” Michael E. Bakich writes in Discover magazine — so you may want to get that time-off request in early.

Why? Because on that date — for the first time in 99 years — a total eclipse of the sun will be visible across the United States, from sea to temporarily-not-shining sea. Millions of Americans will be in easy driving distance of a spectacle that has been called indescribable, unforgettable, even life-altering. The sun will disappear for about 2½ minutes, beginning in Oregon about 10:15 a.m. local time; the phenomenon will move eastward, ending an hour and a half later in South Carolina. In between, the eclipse will be visible from Grand Teton and the Great Smoky Mountains national parks, from St. Louis and Kansas City and Charleston, S.C., and all points in between.

Among the things to look for, WaPo reports:

Find friends who have a solar telescope and watch with them. (You’ll see sunspots, the irregular profile of the moon’s edge, a glimpse of Venus.)

. . . . During the eclipse, remember to tear your eyes away from the sun and turn around: In every direction, you’ll see the painterly colors of a 360-degree sunset.

Everyone in the lower forty-eight will be able to see at least a partial eclipse — unless you’re under cloudy skies, where the sky will just grow darker. But as many passionate bloggers are pointing out, if you want to see it all, get a map and find yourself a spot where the eclipse will be total.

File under: totally cool and well worth marking my calendar.

Correction…July 20, 1963. I was 17 and lived in Newport, Maine. The centerline of the eclipse went directly over our house. Awesome. Completely dark. Birds stopped chirping. We lived on a hill. Watched the shadow of the moon pass over the landscape. https://www.wikiwand.com/en/Solar_eclipse_of_July_20,_1963

Wow, the birds stopped chirping, too?

According to space.com, “It will also be the first time that the path of a total solar eclipse will go coast to coast across the U.S. since 1918.”

I find it fascinating and am so excited about it! 🙂

That’s amazing! Thank you for sharing this information;it’s much appreciated.