7 rapes reported in the first six months of 2017 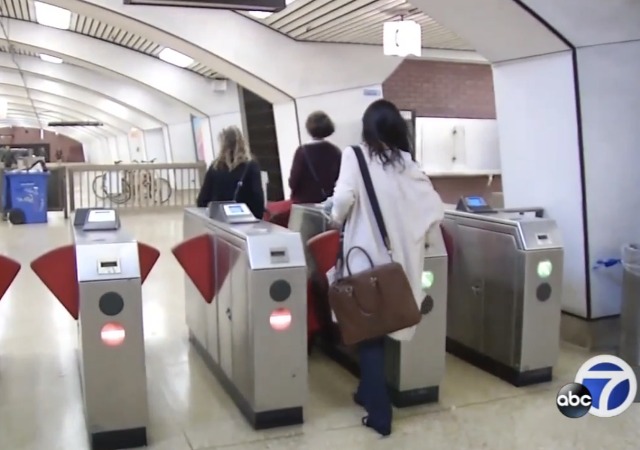 The Bay Area Rapid Transit (BART) is entangled in a new controversy only a week after the public lashed out at officials for refusing to release video footage of crimes over fears the videos would incite racism.

Recent reports indicate that BART has seen double the amount of rapes in the first six months of 2017 than all of 2016.

There were seven rapes reported on BART property from January through the end of June, compared to four in 2016, three in 2015 and two in 2014, according to BART police. At the same time, there has been a notable increase in the number of reported sexual assaults, with 28 in the first six months of the year. That’s the same number of sexual assaults reported during all of 2016, which was already up 75 percent from 2015, when only 16 sexual assault cases were reported. 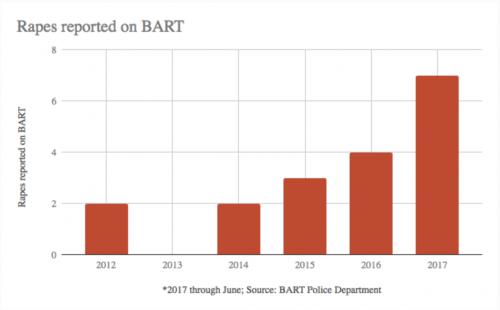 He said there has also been an increase in the number of reported sexual assaults, with 28 in the first six months of the year, which is the same number of sexual assaults reported during all of 2016, which was already up 75 percent from 2015 when only 16 sexual assault cases were reported.

Rojas said that although all of the reported rapes involved sexual violence, not all involved forced sexual intercourse, which is the traditional definition of rape.

Under federal crime reporting standards, sexual assaults with the intent to commit rape are reported as rapes, he said.

“One rape or sexual assault is too many,” Rojas said. 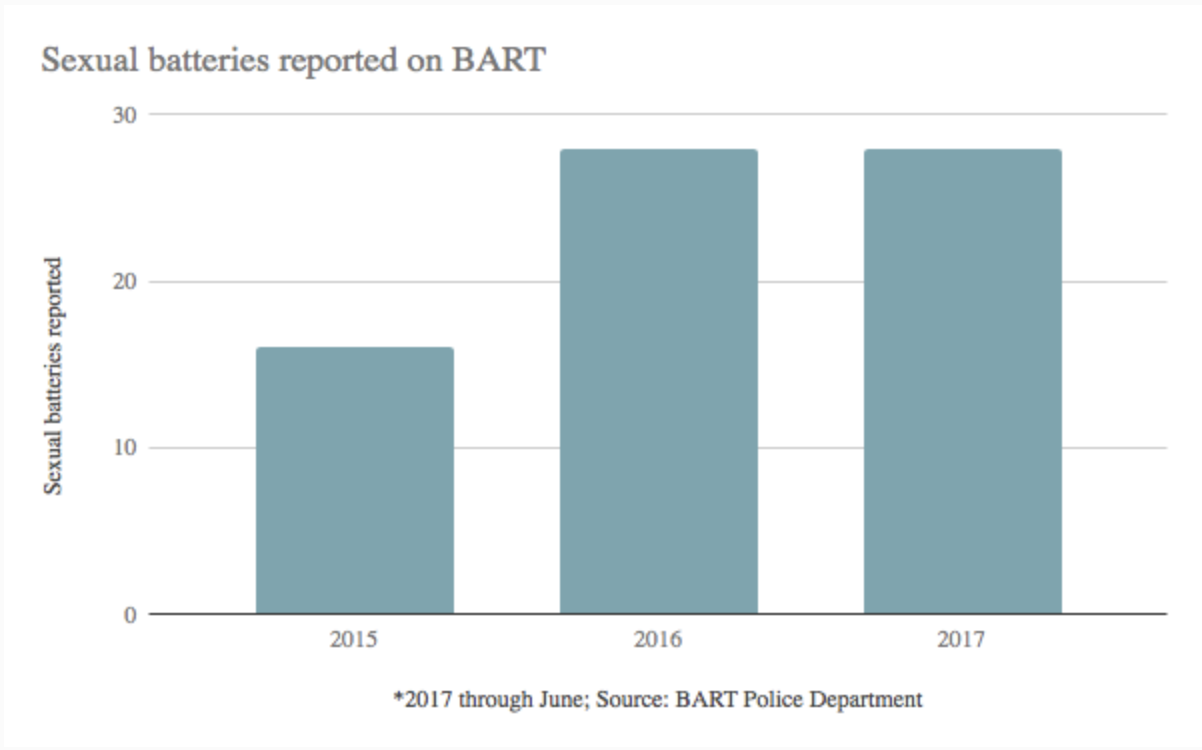 Rojas stated that authorities have not found connections between the rapes and sexual assaults. He noted that the reported “rapes occurred at seven stations, all but one in the East Bay – in the restrooms and stairwells, aboard trains and in parking lots.”

Rojas believes “proactive policing” is a top solution to combat crimes. He said that he is “working on fast-tracking the hiring of more police officers to fill 40 vacancies in the department.”

NBC Bay Area reported that “the number of people applying to join the BART police force is near an all-time low.” The network continued:

“We do cover four counties so it’s an expansive system, but nevertheless crime is up and (we’re) looking at ways to mitigate that and hopefully eliminate it,” Rojas said.

Director Debora Allen, who represents Walnut Creek and surrounding cities in Contra Costa County, said after the meeting that 40 of the police officer positions that BART has budgeted for are unfilled.

“We should have more officers” because the transit system opened the new Warm Springs station in Fremont earlier this year and plans to open other new stations in the near future, Allen said.

“Not only do we have 40 vacant positions that are already budgeted for,” she continued, but BART “should have a lot more police officers than we have budgeted for.”

Speaking about a related topic, Allen said she’s glad that BART will resume sending out daily reports for felony crimes and will issue monthly crime reports to BART directors.

NBC Bay Area reported that “the number of people applying to join the BART police force is near an all-time low.”

Hey, maybe they could get the local BLM leaders to do a recruiting ad for the police.

They are just men with friendly peckers.

nothing ‘friendly’ about this

Does this seem like the same procedures that many of the European countries are using in regard to the horrors committed by the wave of 7th-century scum that the liberal elite allowed into their countries? The police/msm will not report crimes that finger immigrants for fear that it will cause a “Backlash”. Once fear reaches the average rider of a subway system either armed guards will be necessary or ridership will plummet. The American msm has been leaving out one of the most pertinent details of most mob crime for the same reason. When we read about 100’s of “Teens” we all know who they are but the msm will never print it. One would think that it was a multi-ethnic crowd but we all know better. It would seem like fertile ground for some hungry ambulance chaser to sue BART for deliberately omitting a warning of a known public threat.

Taqiyah in action –
we don’t need to wait for SHARIA in SF.
BARF learns from the ‘bestest’, now time to scream Razzzisssm.

if BARF wants to hire more cops, let them look for ex-military.

Wow, who could have seen that coming.

There are large groups of black teens who rob and assault BART riders. The idiots in charge of BART are helping these thugs by keeping the public ignorant of their activities by refusing to release videos of their crimes.

The issue is [class] diversity, but liberals are clearly oblivious to its meaning. The projections of [class] diversity are clear and progressive from government to the press to civil rights businesses to “reformed” religious organizations.

ya think with all the camera they would be able to catch and convict the perpetrators with have to plea bargain, why haven’t they

A large percentage of the cameras where fake so many of the black youth Ghetto Gangsters committing crimes weren’t caught on video.

My husband’s prophecy is coming true. He predicted ten years ago that soon CA would hire an armed guard for every citizen on the street and transit rather than admit illegal immigration was killing us. Reason number 3,256 why we left .

Vindication of the 2nd Amendment. We cannot trust our own local government to protect us, especially if doing so would disrupt a preferred political narrative. Worse, local politicians have actually ordered police to stand down and allow leftist protesters to inflict violence on Americans with the “wrong” political opinion.

I’ve always said that people get whatever government they want, in general. San Francisco Democrats got exactly the world that they wanted. Why on earth are they upset now about the consequences?

Given the anti-police political climate in San Francisco and Oakland, it is a wonder why any sane rational person would want to join any police force here. Oscar Grant, a known thug and recent graduate of San Quentin , is shot by BART Officer Johannes Mehserle at the BART Fruitvale station. Hollywood releases a movie by the same name celebrating the life of Grant as an innocent, as Curly Howard would say, victim of soicumstance”. The movie is lauded as some great artistic achievement.

More recently, San Francisco police shot a known thug from Oakland in an alleyway as he was trying to escape. He was shot while the officers had him surrounded but was still trying to avoid capture. The anti-police activist claimed Tasers would have been sufficient to subdue the suspect and the shooting was unnecessary. Here’s the kicker. In their all-knowing and infinite wisdom, the San Francisco Board of Stupidvisors never authorized SF police to carry Tasers because “someone might get hurt.”

So are they shielding blacks or Muslims? Leftists like the idiots who run BART have been calling Islam a race for years.

Anyone who isn’t a white male.

They are shielding the local wildlife from capture. It shouldn’t be too hard to keep groups of “teens” from entering the station together, or gathering on platforms, unless, of course, you want them too.

“Rojas said that although all of the reported rapes involved sexual violence, not all involved forced sexual intercourse, which is the traditional definition of rape.”

On a college campus that’d make him a rape denialist.