Spread with the “collusion” of liberals 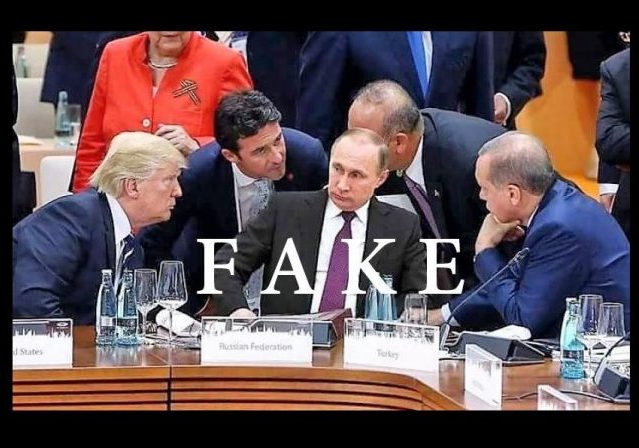 I saw the photo in the Featured Image above (without the caption). I’m not sure where, guessing Twitter.

When I saw it, my thought was something along the lines of “that’s not a good look for Trump, feeds the anti-Trump narrative about Russia.” I didn’t pay it a lot of attention, but I distinctly remember it and my reaction.

It turns out it’s a fake.

It’s not completely clear how it got started, but it was mega-viral on Twitter. The New Statesman traces the history, and points to a tweet from a Turkish Twitter user:

Over the weekend the picture spread across social media, accumulating hundreds of thousands of retweets and shares. Some users quickly pointed out the photo was faked and that Putin had been Photoshopped into an empty chair. Despite this, the picture continued to spread, with many making memes and jokes about a moment that never even happened.

It is not clear where the picture originated. @Hasavrat is a Turkish Twitter user who gained more than 15,000 retweets and 25,000 likes on her tweet of the picture on 8 July, which was captioned: “A Renaissance painting of our age”. She tells me she found the image on the “Turkish Twittersphere” and she doesn’t know who created it. “It was one of those feeds that does political satire and meme-type commenting – we call it #Goygoy in Turkish,” she explains. 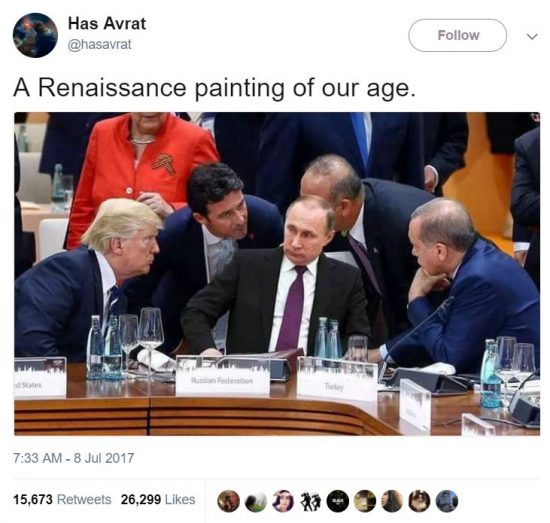 The New Statesman also points to a possible Russian connection, at least in helping it spread:

One of the other earliest posts of the Photoshop was shared by the Russian journalist Vladimir Soloviev, who shared it on his Facebook page on 8 July and deleted it after it emerged it was fake. This has led to some claiming the picture was created and spread by the Russian media to showcase Putin’s power.

Buzzfeed points out that the ribbon on Merkel’s suit also suggests a Russian connection:

Another big giveaway that the photo is fake is the ribbon Angela Merkel is wearing. The ribbon of St. George is a military award which has been adapted by patriots as a symbol for Russian nationalism.

BBC points to the Russian connection as well.

Pro-Kremlin activist Ilias Merkouri tweeted the image to his 162,000 followers with the caption “The scale of personality”.

Sergey Markov, a former MP and supporter of President Putin, also picked it up, speaking ironically about “Russia’s isolation” in a Facebook post, now deleted.

It may have started in Turkey or Russia, but it got plenty of help from American liberals (is that “collusion”?). 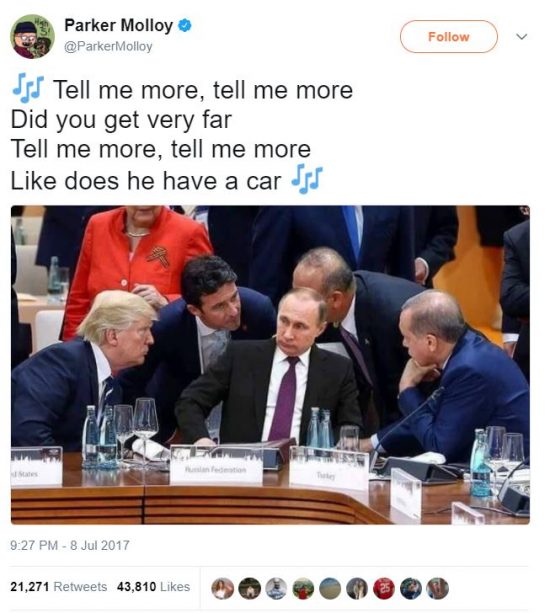 In case you are not aware, Upworthy specializes in overly-simplified liberal memes, as described in my 2013 post, Upworthy — or, How we are losing the internet to lowest of low information young liberals.

Now you know the story, and so do many people.

But how many of those tens of thousands of retweets seen by millions of people created a misimpression?

If it weren’t for fake news we’d have no news at all. It’s like living in the Soviet Union, only with better graphics.

Except in the USSR most people got erased from pictures (and more!). (Sometimes there are just too many people to erase so a whole new picture was needed as in “Triumph of the Will”.)

Maybe the Libs were embarrassed by Obama’s servile bowing and scraping to minor foreign potentates, after all, and are jumping at even an artificial chance to make it look like his successor is almost as big a toady.

Tip of the iceberg.

Technology is advancing where not just photos can be faked.

So can low-quality videos and voices. You can change the lip movement and redub a voice actor with an overlay of the voice tones from the speaker you want with advanced algorithms.

Photoshopping will be a distant fond memory as this technology moves from the labs of MIT and Caltech to the desktops of Russian hackers.

Fake news? You ain’t seen nothing yet.

… but imagine if the voice of a dead actor never has to die because you have enough recorded audio to recast anything spoken in a studio setting today and you can blur a live model with the recorded video of another actor in a studio setting, aka the last Star Wars movie.

Clint Eastwood can act forever … and Kim Jong can appear on propaganda nightly news forever too).

What it means, sadly, is that we are back to the days where nothing we see via electronic media is real, or can be trusted. Only those things we see and hear with our own eyes and ears can be counted on.

The world outside of that is going to regress back into a mirage, and what we think of it will be dictated by whichever tribe we choose (or are forced) to affiliate with.

I grow weary of all this Russia stuff…

The fake is a great look for Trump. Looks like Putin is taken aback by aggressive Trump, like he’s feeling surrounded. Haha

Don’t worry guys, CNN will track the offender down and get an apology and promise never to do this again.

Here is proof that McCain was integrally involved with Hillary in smearing Trump with that fraudulent dossier involving Trump with urinating prostitutes:

Lots of new information including a key person being Britain’s former ambassador to Russia Andrew Wood. It’s high time to drag McCain front and center into this. His name should be mentioned in every post involving this fake news story and every time he and his girlfriend Lesley open their mouths.