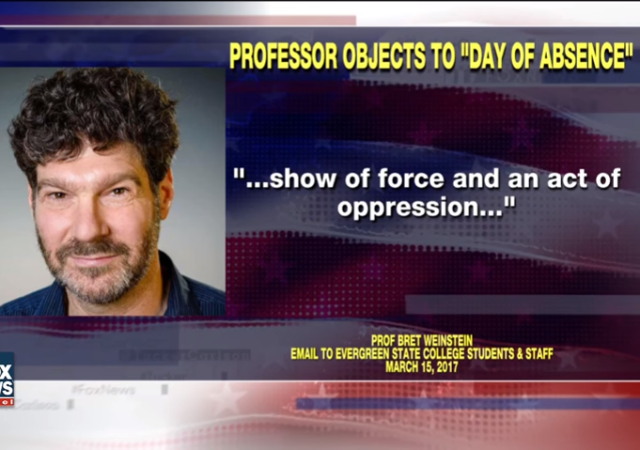 After what we’ve seen over the last few months, who can blame Professor Weinstein for this decision?

Evergreen State College may soon face a $3.8-million lawsuit in connection with its handling of the the 2017 “Day of Absence” protests against biology professor Bret Weinstein.

Students at the Olympia, Washington institution who wanted a day without white people on Evergreen State College’s campus in May went wild over Mr. Weinstein’s refusal to take part. The fracas that followed resulted in a $3.8-million tort claim filed July 5, with details provided exclusively to the education watchdog Campus Reform on Tuesday.

“[Evergreen] failed to set and enforce necessary boundaries in the workplace on campus, selectively has chosen not to enforce its student Code of Conduct, and sent the unmistakable message that the school will tolerate (and even endorse) egregious violations (and even crimes) purportedly to advance racial social goals, diminishing the collegiate experience for all, and fostering a racially hostile work and retaliatory environment for faculty and staff,” Mr. Weinstein’s attorney said in a statement provided to Campus Reform.

The tort claim, which includes Mr. Weinstein’s wife Heather Heying, greases the legal wheels for a future lawsuit.
Other documents provided to the educational watchdog include emails berating the professor for agreeing to an interview with Fox News Channel’s Tucker Carlson.

Wow, finally someone is taking legal action. Must be the professor is a legalinsurection fan and read my comment from the last Evergreen post…or maybe just his common sense kicked in.

na – he is a liberal, and he was discriminated against. That means lawsuit. That it helps dismantle the system he helped create, meh.

seems to be liked by his students
http://www.ratemyprofessors.com/ShowRatings.jsp?tid=713198