After a hard day’s work targeting Jews suspected of being Zionist, it’s time for rest and relaxation 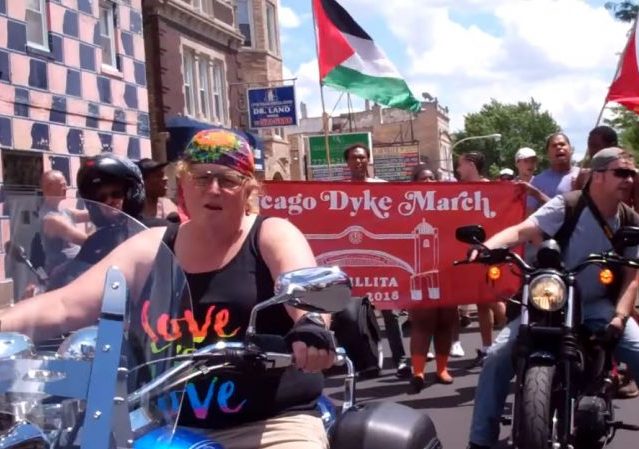 On June 24, 2017, Jews who carried a Jewish LGBT Pride flag with a Star of David on it at the “Dyke March Chicago” were singled out by organizers and kicked out of the event, which was held on public property.

The actions were anti-Semitic despite claims by the organizers they were only “anti-Zionist,” as explained in our post, Psychosis-laced anti-Semitism: Anti-Israel LGBT activists ban Star of David from Chicago parade:

Claims of anti-Semitism are being made over actions yesterday by organizers of a “Dyke March” in Chicago to remove certain Jewish participants from the event because they carried a Jewish LGBT Pride Flag that had a Star of David in the Middle of a rainbow flag. The flag was alleged to be “triggering” to “pro-Palestinian” participants….

Was it anti-Semitism? Objectively, yes.

To single out Jews in this manner, and to apply unique standards to Jews, is anti-Semitism, regardless of subjective intent. See my lecture, When Does Anti-Israelism Turn Into Anti-Semitism?

By analogy, no one would hesitate to call actions racist if blacks were singled out for criticism using standards applied to no other group. The claim that the actions were merely “anti-Zionist” doesn’t hold up. There is no legitimate reason to single out the only Jewish-majority state, and apply standards not applied to dozens of Muslim-majority states and societies.

There was swift and widespread condemnation of these actions, so much so that the organizers have struggle to form a new narrative of why they did what they did.

The Dyke March Chicago organizers issued a statement reframing the original explanations for targeting and expulsion, and claiming the people kicked out were disruptive to their anti-Israel message. In other words, they are blaming the victims. The statement reads in part:

The group in question was heard disrupting chants, replacing the word “Palestine” with “everywhere,” saying: “From everywhere to Mexico, border walls have got to go.” One of the individuals, Laurel Grauer, is the Regional Director of A Wider Bridge, an organization with ties to the Israeli government that was protested for pinkwashing at the Creating Change Conference in Chicago in 2016. It was later revealed that Laurel was aware of Dyke March’s anti-Zionist position from pro-Palestine memes and art that were posted on the Dyke March page, and was also aware of the fact that her flag could be interpreted as being at odds with that position. The night before, she contacted an organizer to ask if her flag would “be protested.” The organizer told her the flag was welcome, but reminded her that the space is one that supports Palestinian rights.

The organizers also have been retweeting an article from The Electronic Intifada, a website run by Holocaust inversionist Ali Abunimah, attacking the Jews who were kicked out as being too pro-Israel.

The organizers also have been tweeting links to solidarity statements from other anti-Israel activists groups, like FedUpFest and BlackAndPink. 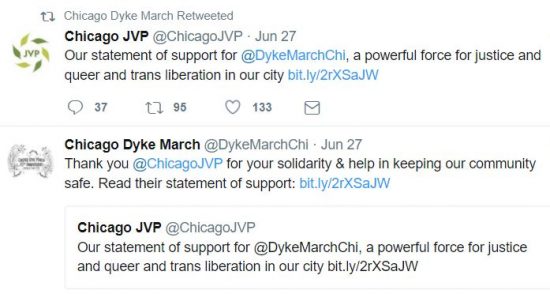 Bari Weiss, writing in the NY Times, says she is “glad” this event happened, since it exposed the anti-Semitism of progressive “intersectionality” practice, I’m Glad the Dyke March Banned Jewish Stars:

Because though intersectionality cloaks itself in the garb of humanism, it takes a Manichaean view of life in which there can only be oppressors and oppressed. To be a Jewish dyke, let alone one who deigns to support Israel, is a categorical impossibility, oppressor and oppressed in the same person.

That’s why the march organizers and their sympathizers are now trying to smear Ms. Grauer as some sort of right-wing provocateur. Their evidence: She works at an organization called A Wider Bridge, which connects the L.G.B.T.Q. Jewish community in America with the L.G.B.T.Q. community in Israel. The organizers are also making the spurious claim that the Jewish star is necessarily a symbol of Zionist oppression — a breathtaking claim to anyone who has ever seen a picture of a Jew forced to wear a yellow one under the Nazis.

No, the truth is that it was no more and no less than anti-Semitism….

Emily Shire previously wrote a devastating takedown in The NY Times of Linda Sarsour’s attempt to exclude Zionist women from the feminist movement. Shire has an equally impressive article at The Daily Beast demonstrating why the Dyke March Chicago organizers attempt to reframe what they did does not hold up.

The article is We Were Kicked Off Chicago’s Dyke March for Not Being ‘the Right Kind of Jew’, here is an excerpt:

Before she was singled out and, according to her, shouted over, cursed at, interrogated, and ultimately forced out by organizers for carrying a rainbow flag with a Star of David against a rainbow background, Eleanor Shoshany Anderson had adored the annual Chicago Dyke March….

When Anderson first arrived at the starting point for the march with her flag, a person in an organizer’s t-shirt questioned her, saying, “We don’t allow imperialist flags. Is that an Israeli flag?”

Anderson said, “I was taken aback for sure, but I said, ‘No, this is a Jewish pride flag. This is the Star of David.’ She [the organizer]  said ‘okay’ and walked away. That certainly gave me some pause but I marched — and the march itself was without incident.”

After the march, in the gathering area for the rally and community picnic at Piotrowski Park, Anderson walked over to Laurie Grauer, another marcher with a Jewish pride flag with whom she attended the march.

Then they were “accosted” by two people, one carrying a Palestinian flag and the other wearing clothes with Palestinian flag patches, according to Anderson, yelling “How dare you carry an Israeli flag.”

“I started to explain, ‘No, this is a Jewish pride flag. This is the Star of David,’” Anderson said. “But they really were not interested in hearing it. They were swearing. They were talking over us.”

Anderson also stressed that she refused to discuss her personal views on Israel (nor did she during her interview with The Daily Beast). “I just said, ‘I’m here as a Jew. I’m here as a Jew.’’ …

“They [organizers] just kept stating over and over again ‘This is unacceptable. This is too triggering,” Anderson said. “More people came over. I felt very out-numbered, and they were talking over me. It was clear that this was something that was unwinnable, and I left. Or, more accurately, they drove me out.”

In official statements, the organizers of the Chicago Dyke March have consistently said those carrying the Jewish pride flag were “asked to leave.” By the accounts from Anderson and Grauer, it seems like it was not a request but an order forced on them….

Apparently the Dyke March Chicago group is stressed by all this blowback.

We’re so grateful to have such amazing friends and allies who care about our mental and emotional health and have launched this fundraiser to send our organizers on a much-needed self-care retreat! If you came to Dyke March this year and enjoyed yourself or just want to show some love and to be in solidarity with us from afar, please share among your networks and consider dropping us some coin so we can heal and rest up for more resistance this year! Thank y’all so much & we love you!! 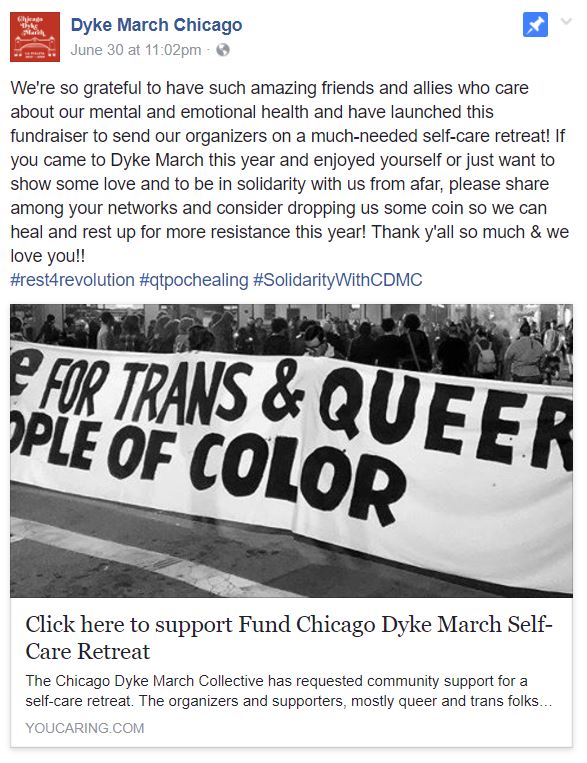 The Chicago Dyke March Collective has requested community support for a self-care retreat.

The Chicago Dyke March has been an organization for many years that shows us a glimpse of a world that is possible. The CDM Collective creates a space, even if for just one gorgeous day, where people are seen, loved and celebrated for being queer, trans, gender nonconforming, nonbinary, intersex, black, brown, fat, kinky, undocumented, disabled.

Chicago Dyke March has always been and will always continue to fight for liberation for all, especially queer and trans folks who face further marginalization and discrimination based on their race, ethnicity, socioeconomic status, age, size, gender identity, gender expression, sexuality, culture, immigrant status, spirituality, and ability.

If you’re able, please consider contributing and sharing so that the Chicago Dyke March Collective can take a much needed retreat to rest, re-energize & be in a space of pure love. 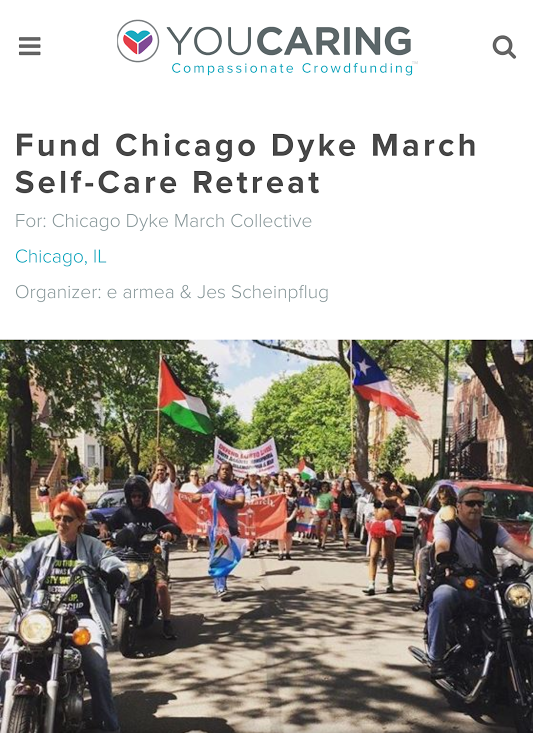 Several people have donated a dollar so they could get their thoughts against the Chicago Dyke March Collective posted in the donation section:

John-Paul Pagano, who has covered these developments closely, terms this development the “medicalization of politics”: 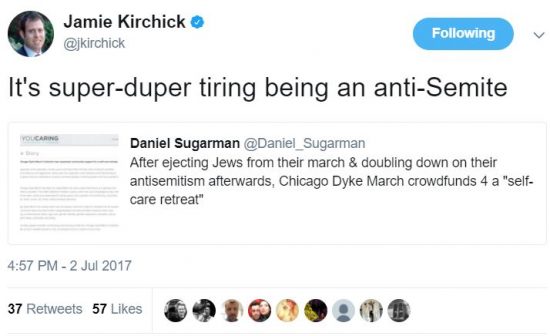 Particularly when people object and call attention to what you’ve done.

I now have a very bad visual of an old tome about a little Dutch boy….

I don’t like all this commentary that seeks to put daylight between “Jew” and “Zionist”, and pretends that there’s no connection, that it’s not perfectly fair to assume any Jew is likely to be a zionist. It’s disingenuous. The truth is that these people correctly connected the pride flag with the magen-david with Israel, because the only reason they object to Israel in the first place is because it’s Jewish. It’s like someone who’s allergic to onions asking whether there are any in a dish and being told “no, only shallots”. From the allergic person’s point of view there’s no difference. And from the antisemite’s point of view there’s no difference between a zionist and “just a Jew”. If zionists weren’t Jews (or allies of Jews) they wouldn’t hate them.

The distinction between antisemitism and anti-zionism is theoretically valid. It is possible to be one without the other. But in practice, outside Orthodox Judaism itself, it’s rare to the point of almost not existing. Certainly it’s impossible to advocate the replacement of Israel by a “Palestinian” state without being an antisemite.

On behalf of all Holocaust survivors – and those that didn’t survive: may these freaks become highway statistics. And the sooner the better.

I wonder why the Left’s apartheid card didn’t open abortion fields in an elective war.

Wouldn’t it be hilarious if the locale where they seek to retreat kicks them out because of their racism?