Polling this far out from the mid-term elections in November 2018 is just guesswork.

But a Washington Post – ABC News poll has Democrats worried, because while it shows voters in general want a change in control of Congress, it also shows that Republicans in general, and Trump supporters particularly, are much more motivated to vote.

Aaron Blake at The Fix (WaPo) writes, This poll should be a warning sign for Democrats:

History suggests the 2018 election will almost surely be a bad one for Republicans. Midterms are generally considered a referendum on the president, and the results are almost always bad for said president. Layer on the fact that President Trump is the most unpopular new president in the modern era, and it would seem to be — at least at this early juncture — a clear recipe for a Democratic wave.

The key word there being “seem.”

A new Washington Post-ABC News poll, as Mike DeBonis and Emily Guskin report, presents a pretty mixed bag for Democrats. It shows that registered voters say they want Democrats to control Congress to be a check on Trump by a 52-38 percent margin, but it also shows Democrats are — rather remarkably — less enthusiastic about voting than Republicans are. While 65 percent of Republicans and GOP-leaning adults say they are “almost certain to vote,” just 57 percent of Democrats and Democratic-leaning adults say the same. 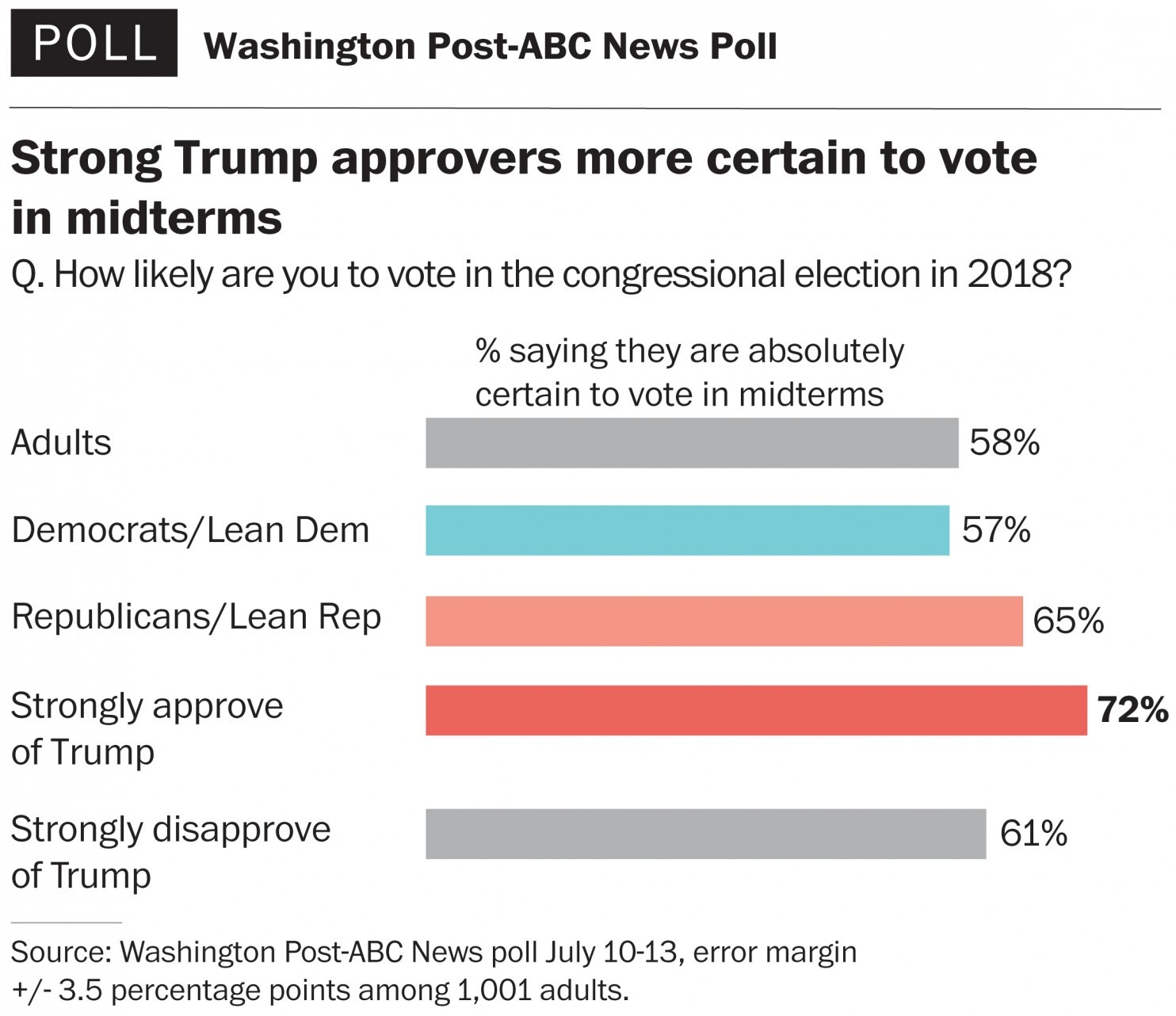 The other significant finding, and related to the lack of Democrat motivation, is that Trump unpopularity is not a motivating factor for Democrats. ABC News reports:

Despite Trump’s historically low approval rating, opposition to him does not produce appreciably more 2018 voting intention than support for him does, the latest ABC News/Washington Post poll found. That’s a challenge for Democrats because their supporters’ midterm turnout typically is low….

Moreover, 51 percent of polled registered voters say Trump won’t be a factor in their votes for Congress. The rest split closely between saying they’d vote to support Trump (20 percent) or to oppose him (24 percent) — a nonsignificant gap.

The division is narrower than in the past, further indicating no outsize impact of Trump’s unpopularity at this point. Before the 2014 midterms, surveyed registered voters said they’d cast their vote to oppose rather than support Barack Obama by a 10-point margin, and the gap against George W. Bush was 14 points in November 2006, compared with the scant 4-point difference today.

Sure, this is just one poll and the 2018 elections are far away. But it does demonstrate a number of things which make sense.

First, Trump voters will be critical to Republican success in 2018. Oddly, the dysfunction of and disappointment in congressional Republicans may motivate Trump voters even more to give Trump greater majorities in Congress.

Second, national polling as to popularity or generic congressional preference may not reflect congressional success to the extent it might have in the past in light of this motivation gap. We recently highlighted polling showing Trump’s approval at 50% in the counties that went for him in 2016.

Third, being anti-Trump may not be enough for Democrats, who are a leaderless party. There is a sizable portion of the Democrat base who hate the people who run the Party, who feel Bernie was cheated, and who may not show up. As befuddled as the Republican Party seems, there is no Democrat message other than being anti-Trump. At least this poll shows that will not be enough to get Democrats to the polls in big numbers.

…shows that Republicans in general, and Trump supporters particularly, are much more motivated to vote.

Given the GOP’s campaign against ObamaCare and their failure to repeal it, I would find this encouraging if I were a Democrat.

I thought all polls are crap. Especially those coming from a news organ. Or is it just polls that support the tribal meme that are gold…???

I guess I missed the news piece about how the polls could be so wrong as to cause a nearly 200 Electoral College turn around and a victory for a Presidential candidate who “had no path to 270.”

I do remember Gallup saying at the beginning of the 2016 campaign that they would not be doing the Presidential campaign because it was too volatile in the past.

Gallup doen’t like the fact that unlike other polls when you vote in an election the facts of what the public really thinks can be compared to the polls. It exposes them as fake and if these polls are real it is only to provide a wake up call to Democrats which other than depressing the Republicans is the only two purposes of polling. If the Democrats see only riged polls in their favor they sit pat and lose big.

What is already energizing the Republican vote for 2018 is the prospect for ousting more establishment RINOs in the primaries than at any time in history.

Just as the RINOs did in VA when Brat challenged Cantor, they will again argue that the challenger can’t win and thus will cost the GOP the majority in the House or Senate. WRONG! We long-time Tea Party people are angrier than ever before at the Republicans and will never vote for a Democrat. There is just no point in re-electing THESE Republicans.

What is motivating us is our hatred for the GOP for being Dem enablers. We have no intention of voting Democrat to “teach the GOP a lesson”. We want them out and will vote for the challenger. Eric Cantor may have been a historic precedent but it wasn’t a fluke. It was a breakthrough demonstrating that anyone can be beaten regardless of their rank, financing or polling data.

So anyone who thinks the Democrats are licking their chops at their prospects for 2018 is again listening to the misinformed corporate polls and establishment consultants. And when you see the dirty money piling up in the incumbents’ coffers, it’s just more dirty money to burn in the establishment funeral pyre. Selling cancer has simply gotten too expensive.

So get ready for a rollicking, kick ass primary season next year.

This is what morons like Rags, the MFM and liberals in particular cannot fathom…that people are P1SSED at THIS lot of Republican Democrats!

Get these road blocks to progressed removed and people put in place who will carry out what they said they would!

Except for Cruz and a very few conservatives, you’d have had the T-rumpCare crap sandwich that was roaring down the tracks. With T-rump’s active support.

The conservatives just saved the GOP…maybe.

The healthcare debacle seems to show that, while the Democrats have more or less completed the purging of their the ‘Big Tent’, the Republicans still have some semblance of a ‘Big Tent’ with a handful of RINOs.

“Just as the RINOs did in VA when Brat challenged Cantor, they will again argue that the challenger can’t win ..”.
Go Nehlen!

Exactly. I, along with millions of Trump supporters are going to be looking forward to dumping these RINOs. I’m so sick of them. Ryan, McConnell, Graham MUST GO!!!

Money for the DNC has dried up. They are in very bad shape right now. They don’t have enough to defend all their Senate seats so the candidates are going to have to raise more money.

The Deemocrats are weak as water. That isn’t even the issue.

The issue is the loopy fantasy that “T-rumpian” power will sweep incumbents out of office. But the reality is that T-rump ENDORSED all incumbents in the last election. This is a precedent.

So far, the ONLY people T-rump has threatened are actual conservatives who have stood against him. You may be all in that. I’m agin it.

Do not reply to me. You are a raging lunatic. Please never comment on my posts.

Heh! Here I am! What did I say that was not true?

… but look where the money is going ..
The Obama Foundation.

I have no idea how this translates into election successes.

WaPo is delusional. “Registered voters want Democrats to be a check on Trump.” makes no sense. If the voters didn’t want Trump policies enacted, why would they elect him?

Ain’t it funny how WaPo never found voters who said they wanted Republicans to be a check on obama. Republicans always seem to get elected to work with Democrats and ‘get along’, says the WaPo and their narrative.

Registered voters do want Democrats to be a check on those loopy fantasies about “T-rumpian” power, which still haven’t materialized.

The “Resistance” has generated lots of fear. The problem for Democrats is that unless those fears materialize as policy and actions by Trump, it will be dismissed as “cries of ‘Wolf'”.

Oh, I think silly fantasies abound in both tribes.

You’ll see them here with the notion that T-rump constitutes a “third party”, and that he’ll sweep away incumbents (who he endorsed, works with, and is reliant upon).

Thus far, the only people T-rump has trashed are conservatives.

Hopefully, more Democrats will come to see that Trump is not the problem he has been made to be, but the opposite. Whether they do so openly is another story.

The system has become rotten to the core and Trump has exposed it like no one before.

Trump did something very unusual. He didn’t turn into a totally different animal once he entered office. In American politics, this is radical.

Usually we vote for one thing, but seem to actually get something else. And the problem isn’t voting per se—appointed offices suffer the same fate. Consider Souter or Roberts. The conservative leanings are just costumes; inside lurks some kind of liberal jerkwagon. Again, and again, and again … Since we’re almost sure to get a dog, it’s only worth hauling out to vote if there’s nothing on TV that night.

Now, all that’s changed. Now we know that there really are humans walking this Earth who—for better or worse—are exactly what they seem. And all we have to do is vote for them.

Turnout is going to be yuge.

T-rump didn’t HAVE to change POST-election.

He’d changed PRE-election! He is the very model of the modern major “campaign conservative”, who, on a dime, “converts” from what he’s been his whole life entire to a new guise.

And MANY, MANY dupe were totally taken in.

For someone who loathes Trump so much, you sure do act like.
And thin-skinned just like a Left-Tard too.
Sooooooooooooooo funny……!!

When we write the president, should we just write Ragspierre where the zip code usually goes?

Another factor that should give democrats some worry is that voting fraud in general, and illegal alien voting in particular, should be way down next time around.

Does that guy in the photo above look like Rick Moranis taking Communion, or what?

Sort of.. But I think it’s a woman (based on the complete lack of facial hair).

“Polling this far out from the mid-term elections in November 2018 is just guesswork.”

I was amused at Nate Silver insisting how the polls actually DID call the 2016 election within their margins of error.

Didn’t talk much, though, that the polls which achieved this feat were the ones conducted over the weekend before the election, when they were pretty much useless to anyone anymore. Not much of a forecasting capability here, folks.

So the Democrats have unveiled a new slogan for the next election cycle:

The conservative will stay awake for a while now that they finally woke up. Things were getting wayyyyyyyyy out of hand and they’re not about to let that happen again for quite some time.