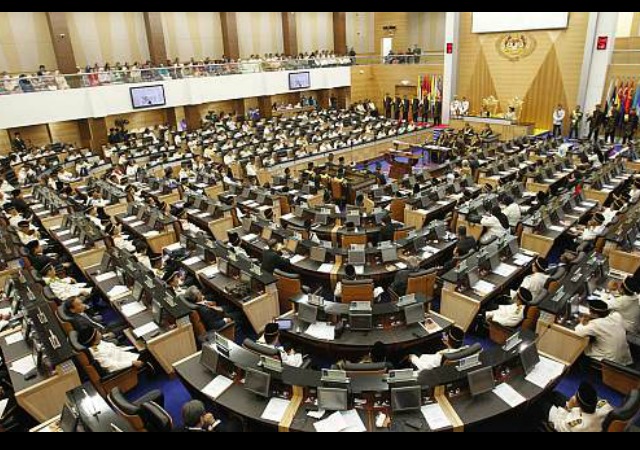 Malaysian Member of Parliament Che Mohomad Zulkifly Jusoh claimed that a wife abuses her husband if she denies him sex. From the BBC:

Che Mohamad Zulkifly Jusoh from the ruling Barisan Nasional coalition was addressing a domestic violence debate during a parliamentary session.

Malaysia is in talks to amend existing laws against domestic violence.

“Even though men are said to be physically stronger than women, there are cases where wives hurt or abuse their husbands in an extreme manner,” he said.

Mr Che made the comments during a parliamentary debate on amendments to domestic violence legislation.

Politicians and activist groups have expressed hopes that the new bill will offer more protection for victims of domestic abuse.

It also remains legal in Malaysia, a Muslim-majority country, for Muslim men to have as many as four wives as long as they obtain permission from a Sharia court.

Mr Che touched on this in a speech to parliament, saying that denying a Muslim man the chance to marry a second wife also amounted to “abuse”.

Well, he has a point. Particularly if the man is expected to be faithful and stay in the relationship with a harpy.

Well of course. Does a field have the right to tell the farmer it doesn’t want to be plowed?

“Your wives are a place of sowing of seed for you, so come to your place of cultivation however you wish and put forth [righteousness] for yourselves. And fear Allah and know that you will meet Him. And give good tidings to the believers.”

Wives just like a husband’s “place of cultivation” are property under Sharia. Nothing more.

Fortunately Islam provides a remedy for this sort of insolence. Husbands get to beat their wives if they refuse to provide them with sex. Among other things, including for no reason at all.

“Men are in charge of women by [right of] what Allah has given one over the other and what they spend [for maintenance] from their wealth. So righteous women are devoutly obedient, guarding in [the husband’s] absence what Allah would have them guard. But those [wives] from whom you fear arrogance – [first] advise them; [then if they persist], forsake them in bed; and [finally], strike them. But if they obey you [once more], seek no means against them. Indeed, Allah is ever Exalted and Grand.”