Guest: “you asked me a question and now you’re responding for me” 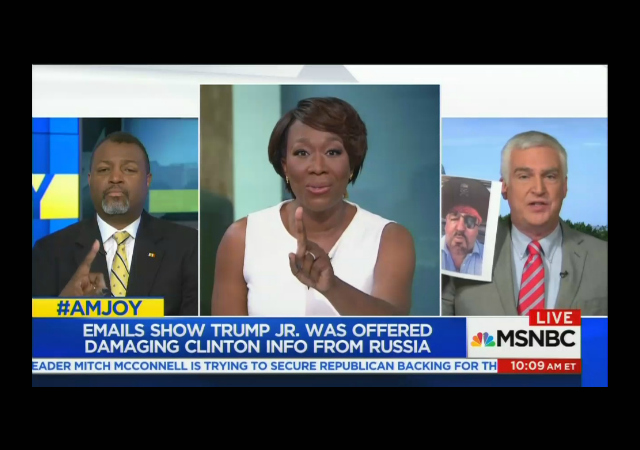 Joy Reid has done it again, shutting down on her MSNBC show this morning yet another conservative guest who tried to get in a word edgewise. This time it was former CIA analyst Fred Fleitz in the unenviable position of trying to make the case that the meeting between Trump campaign aides and Russians wasn’t the horror the left is making it out to be.

Reid first asked him for his comments, but before he could get started, proceeded to cut him off, launching into her own monologue. When Fleitz asked if he could respond, Reid replied “No. No you cannot, until I’m finished answering the question.” Rightly retorted Fleitz: “you asked me a question and now you’re responding for me.”

As Reid continued to stonewall him, Fleitz observed: “this is a rigged interview.”

The most revealing moment came when Fleitz told Reid “you do not want the other side of the story to get out.”

Reid gave away her game: “what other side of the story could there be?”

Got that? The only narrative is the liberal narrative. Anything else will be suppressed.

FRED FLEITZ: Well look, Mr. Pirate here was not shared the details of a Russian operation to affect the election.

JOY REID: But no one is alleging he was —

REID: He was the conduit for the meeting. Nobody said he is some sort of Russian spy.

FLEITZ: But wait a minute — how about —

REID: He is the conduit for the meeting.

FLEITZ: How about this email —

REID: Your holding the silly picture of him in a pirate outfit doesn’t stop the fact that you had the son of the President of the United States sees in an email —

REID: Wait a second. Sees in an email that the Russian government would like to provide information. That’s an adorable picture. It doesn’t change the fact —

FLEITZ: Thank you, thank you.

REID: That they, that Paul manafort, who was the chairman of the campaign, a very seasoned political player, that the son of the President of the united States and his brotherin-law —

REID: No. No, you cannot until I’m finished answering the question.

FLEITZ: Now, you asked me a question and now you’re responding for me.

FLEITZ: It seems like this is a rigged interview. Let me answer the question.

REID: — the Russian government wanted to provide the information.

REID: So the point is not Rob Goldstone.

REID: The point is the meeting they took, right?

FLEITZ: You do not want the other side of the story get out. The Russian government —

REID: What other side could there be?

How do these lunatics get on TV?

Because she’s willing to sell her soul to the Dimocrat plantation overseers.

It seems like Black leftists are well past “collusion” with Russia, they are every bit Russian of the old days themselves. What is it about blacks that makes totalitarian behavior so seductive?

How does chelsea clinton get a book published under her name?

Journolist of the Fourth Estate serving and protecting the status quo.

Ya know, this whole thing could be settled by Brian Williams since he was there at this Russian meeting.

Maybe he took a page out of Hilliary’s book, and corkscrewed in for a landing.

Russians were classified as bitter clingers when they rejected “=” (i.e. Pro-Choice/selective exclusion), condemned as deplorable with their intervention in Obama’s elective war in Syria, and deemed not viable when backing the refugees (a.k.a. “separatists”) of the coup d’etat in Kiev. It probably doesn’t help that they reject abortion rites (i.e. denying lives deemed unworthy) and other Planned Parenthood services (e.g. clinical cannibalism/Mengele experiments), which is what earned the ire of female chauvinist pigs everywhere, including, apparently, Joy Reid.

Yet another example of the Left’s propensity to “dish” without being able to “take”.
They’re cowards and should be made to feel that way every single day

What’s amazing to me is that these same people were feeling tingles up their legs when Obama said he’d meet, without conditions, leaders of Cuba, NoKo, and Iran. How wonderful, they gushed! He’s so open-minded and serious and thoughtful. He’s thinking outside the box, and that’s JUST what we need!

And Oh! how they cheered his and Hillary’s Russian “reset”!

But I guess that was different. You know, somehow.

All are subsets of Leftism. A cancer within Western thought for centuries. Leftism never goes away. It’s like some tumors, sometimes benign and sometimes malignant. Today meaning the last 70 years, it is malignant.