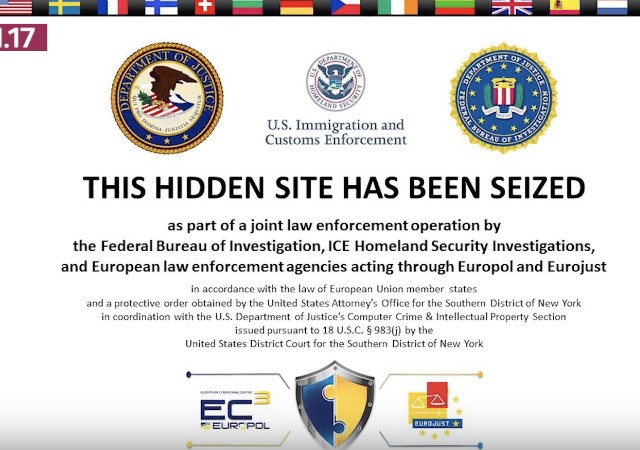 The FBI and Dutch authorities have successfully shut down AlphaBay and Hansa, two of the largest marketplaces on the dark web, which sold drugs, firearms, malware, and forged documents.

AlphaBay, which the FBI seized, “allegedly serviced some 200,000 users and 40,000 vendors.” It disappeared earlier this month with Attorney General Jeff Sessions describing the seizure as “one of the most important criminal investigations of the year.”

The Wall Street Journal reported that Thailand, the Netherlands, Lithuania, United Kingdom, France, and Europol took part in the investigation into AlphaBay. The U.S. indicted the alleged owner Alexandre Cazes, 25, in California last month. Officials uncovered his identity “because he used a Hotmail address associated with his real name in password reset emails to his customers.”

Authorities arrested him in Thailand and found him dead in his cell on July 12.

The site has been referred to as a new Silk Road – the website that was a centre for drug, arms and other illegal trafficking before it was shut down. But actually it was far larger.

Before it was taken down, police and other law enforcement officials appear to have been running the site. That means they will likely have the details of many of the people who were using it.

Mr Sessions and other federal officials announced an indictment in California on Thursday of a suspected administrator of the site, and the Justice Department filed a forfeiture complaint to seize assets connected to the operation.

Authorities stated that Cazes lived in luxury in Thailand since he “earned commissions of between 2% and 4% on AlphaBay sales.” The investigators found the site had 4 million “transactions between May 2015 and February 2017 valued at approximately $450 million.” It averaged “between $600,000 and $800,000 in sales a day.” This means Cazes raked in “between $9 million and $18 million during that period.”

He resided in Thailand with 10 cars, “including a $900,000 Lamborghini and a $293,000 Porsche Panamera. He owned a home in Phuket, Thailand and other real estate in Bangkok, Cypress, Antigua & Barbuda.

AlphaBay had “approximately eight to 10 anonymous staffers, including a second site administrator identified only as ‘DeSnake.'”

Hansa, another large marketplace, fell into the Dutch police’s hands “in late June and had control of it since.” From The Wall Street Journal:

By operating the Hansa website for several weeks, police were able to intercept tens of thousands of messages between sellers and buyers on the site and collect more than 10,000 delivery addresses, Dutch police said. The site averaged 1,000 orders a day, most of which were for “hard drugs,” they said.

The surveillance is likely to give pause to some Dark Web users, said Nicolas Christin, an associate research professor at Carnegie Mellon University who studies online marketplaces. “This will probably have a stronger chilling factor than a mere seizure,” he said.

People access these Dark Web sites with “the Tor browser, which uses a special network that takes steps to preserve the anonymity of its users.” Wall Street Journal continued:

The Dark Web has emerged as a troubling source of illegal gun sales, researchers say. According to a Rand Corp. study, arms sales on the Dark Web now total an average of $80,000 a month. “Due to the arms trade on the dark web, every month there could be up to 136 untraced firearms or associated products in the real world.,” Rand said Thursday.

American Greed did an interesting show on Silk Road, Dread Pirate Roberts, and the corrupt feds that went to jail for stealing bitcoin from those affiliated with Silk Road.

It appears that Cazes lived a life of luxury for a while. It is remarkable that computer savvy people make such mistakes, Ross Ulbricht of Silk Road made them as well.

$80,000 per month in gun sales? That is less than $1MM per year. Sales of stolen guns among organized criminals in face to face transactions would far exceed that.