Prime Minister Modi’s visit lays “the foundation of a new chapter in relations with Israel,” commented the country’s leading business daily Economic Times. Both countries took “historic steps towards a new engagement,” wrote newspaper Hindustan Times. Like many Indian newspapers, The Hindu described the visit as “ground-breaking” and noted the “extraordinary welcome” Indian leader received in “the Jewish nation.”

“It is time Muslims rethink their idea of Israel,” wrote the Indian-Muslim commentator Tufail Ahmad. “Muslims in India must keep in mind that their success lies in India’s prosperity. As India makes rapid progress, the fruits of economic development and growing educational opportunities will inevitably reach Muslims as well. However, India’s economic progress lies in its strong security partners: Israel and the US.”

There were prominent voices in support of Prime Minister’s visit, even within the main opposition Congress Party. The former Deputy Foreign Minister Shashi Tharoor praised Prime Minister Modi’s diplomacy on Israel. “[This] shows our relationship has reached a level of maturity which makes it possible for us to contemplate first ever PM visit [to Israel],” Tharoor said.

SwarajyaMag, India’s leading centre-right magazine with a young readership, praised Prime Minister Modi’s diplomatic initiative, urging the government to “disassociate itself completely from the Palestinian question” and seek greater strategic cooperation with Israel.  Ahead of Modi’s visit, the publication was blunt in its assessment of India’s foreign policy, stating “[the Visit] does not upend India’s decades-long policy by betraying a tilt towards the Jewish state.” Criticising India’s track record at the UN and other international fora, SwarajyaMag wrote:

A truly historic moment would be if India were to disassociate itself completely from the Palestinian question – it is not as if it has contributed in any meaningful way all these years. The issue does not affect India and is best left to the concerned parties to resolve, much as India insists on Kashmir. If India’s voting at international fora were to shift to reflect this new position, such a move would give Israel much diplomatic room to manoeuvre.

In the backdrop of the visit, there was a good measure of whining in the ‘Palestinian’ camp, and in such times you can indeed rely on CNN and CNN-owned Indian outlets to give these cry-babies full airtime.

While Indian news outlets were cheering Modi’s visit to Israel, CNN ran a story that the network in its own words described as putting “the spotlight on the absence of Palestine” during the visit. Following its parental network’s footsteps, CNN-owned Indian news channel, CNN-News18, ran a story titled “Old Friends Palestinians Bugged as PM Narendra Modi Enjoys New Dosti [friendship] in Israel.”

CNN-News 18 quoted “Palestinian” Foreign Minister Tayseer Jaradat, saying “Palestinians feel that India has decided to enhance its cooperative relationship with Israel at the expense of the Palestinians.”

Palestinian Authority (PA) Deputy Foreign Minister Tayseer Jaradat told CNN, “We would prefer it if the prime minister of an important country, like India, who is visiting the region, should also visit Palestine when he visits Israel.”

The article further says that the Palestinian frustration with India started more than a year ago when India abstained from a UN Human Rights Council vote, which shocked the Palestinians. Historically, India was one of the main supporters of the Palestinian political movement. [CNN-News18; July 6, 2017]

Indian business daily Financial Express also delved into this newest cause of ‘Palestinian suffering’. The newspaper ran a story titled “Many from Gaza disappointed over PM not visiting Palestine.” The article tells the ‘heart-breaking’ story of a 53-year-old Gazan “multimedia firm” owner named Faithi Tobail, who was for some reason “highly disappointed that PM Modi will not visit Gaza Strip during his visit to the Jewish country.” The reporter also met an enraged Gazan ‘student’, Ali Mohammad, who incidentally wants to study journalism in India. “We are feeling discriminated” that Modi was not coming to terrorist outfit Hamas-controlled Gaza, Mohammed said.

This reporting was in line with Qatar-based Al Jazeera that ran stories like “Palestinians unhappy over Modi snub on Israel trip.” 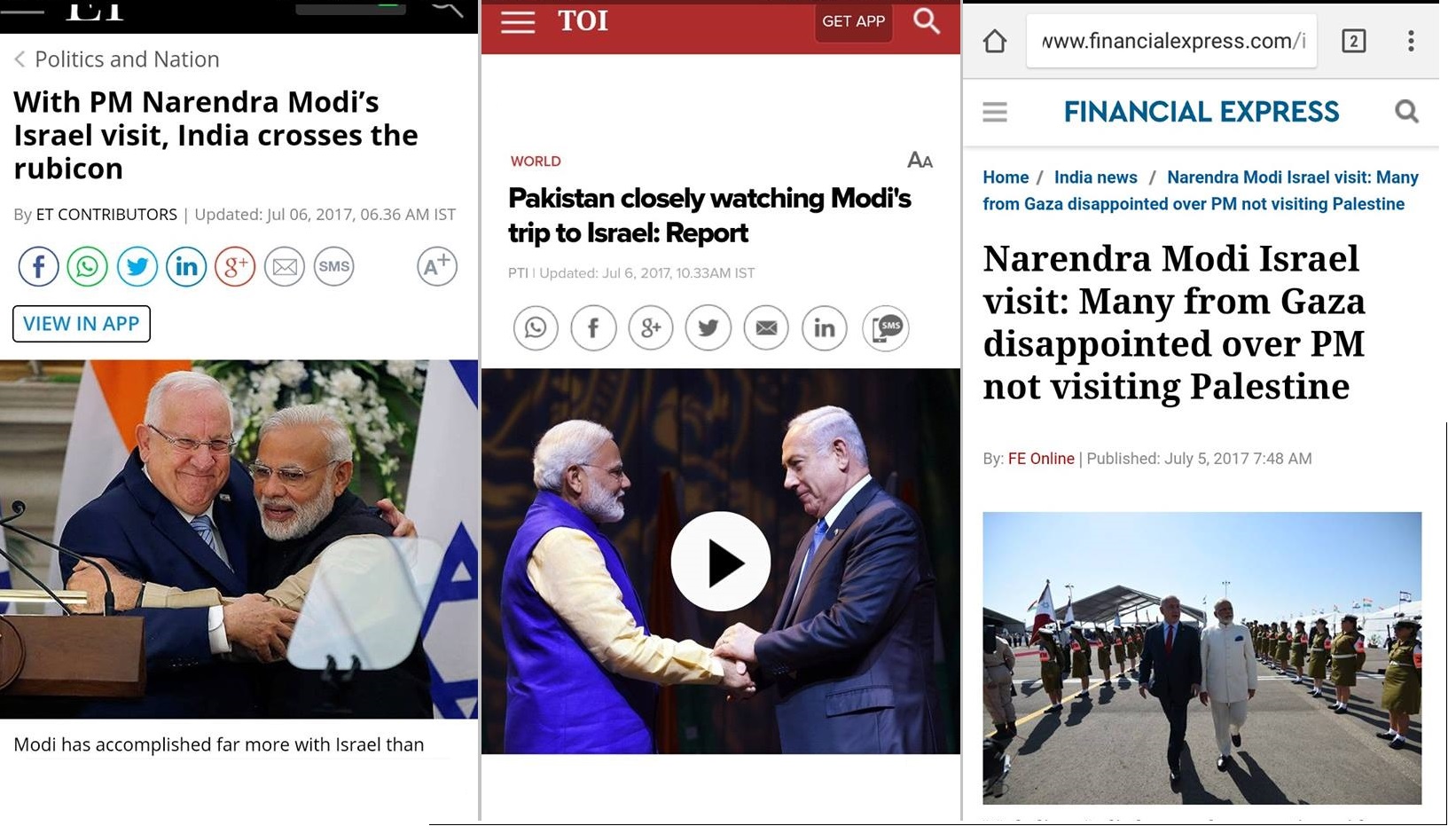 I thank the people and Government of Israel for their hospitality. This successful visit will add more energy to India-Israel relations. pic.twitter.com/sreMPExX9i

Prime Minister Modi, today, on his third and the last day of the trip, visited the Indian military cemetery in the northern Israeli city of Haifa, and paid homage to the fallen Indian soldiers at the Battle of Haifa during the World War I. He also saw the water desalination plant near Haifa. Acquiring purification technology, like the one demonstrated in Haifa, is central to his agenda on this ground-breaking visit to the Jewish State.

“I thank the people and Government of Israel for their hospitality. This successful visit will add more energy to India-Israel relations,” Prime Minister Modi tweeted, marking the end of his 3 -day tour. As Indian Prime Minister’s visit draws to a close, Israel and India begin a new chapter in diplomatic ties that will not only impact the areas of bilateral cooperation, but will have geopolitical implications in their region and beyond.

As for the video, “Why Modi wore a white suit:” his blue suit matching the Star of David on the Israeli flag was at the cleaners.