“Justin, you can’t imagine all the people who wanted to help you” 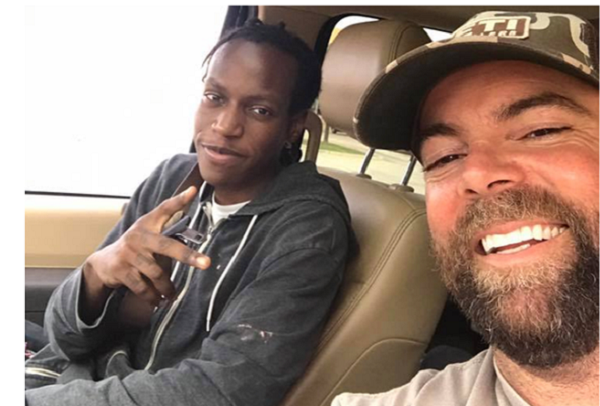 I have to admit, I love love love these stories.  It’s sweltering hot in Texas at this time of year, so when Andy Mitchell learned that Justin Korva was walking three miles to work each day, he posted about it on Facebook.

The community rallied around the industrious and dedicated fast food worker and bought him a car.

When Andy Mitchell spotted a young man in a fast food uniform walking along the side of a road on a 95-degree summer day in Rockwall, Texas, he felt compelled to pull over.

He rolled down his window and offered the man, a 20-year-old named Justin Korva, a ride — not knowing how much that small gesture would impact the man’s life.

While driving the Korva to work at Taco Casa, Mitchell discovered the young man normally walked 3 miles to work and home again every day. Korva said he was determined to save up money and someday, he hoped, he would be able to afford a car.

After dropping off Korva, Mitchell posted about the man’s determination on Facebook.

“To all the people that say they want to work but can’t find a job or don’t have a vehicle all I can say is you don’t want it bad enough,” Mitchell wrote.

. . . .  Hundreds of people in the community saw his post, including Samee Dowlatshahi, owner of Samee’s Pizza Getti Italian Bistro & Lounge in Rockwell.

Dowlatshahi offered to put a donation box inside his pizza joint to aid Korva in his quest to buy a car.

From there, CBS continues, Danny Rawls, general sales manager at Toyota of Rockwall and a friend of Dowlatshahi, pitched the idea of helping out with a car from their lot, and the next thing you know, Justin has a car, a year’s insurance, two years’ worth of oil changes, and plenty left over for gas money.

Last Friday, they drove the white 2004 Camry to Taco Casa and asked Korva to come outside.

“Justin, you can’t imagine all the people who wanted to help you,” Mitchell said, as several people filmed the exchange on their cellphones in the restaurant parking lot. “So, instead of walking to work, buddy, you’re driving this car from now on.”

Korva looked at Mitchell in disbelief, “Are you serious?”

“It’s your car! This is your car,” Mitchell repeated.

Korva gave each man a hug, wiping tears from his eyes as he walked toward the car.

Watch the video of Mitchell and others involved in helping Justin present the car to him:

Who needs the government? Great story, thanks!

That damned white patriarchy, keeping him down. /sarc

I love these stories as well. If he’s as hardworking as it seems, he’ll go far

The idea of somebody willing to walk to work to get to work is great.

Him flashing what appears to be gang signs in the first photo is not so great.

Yeah, no. You need to learn your signs, my brother.

What makes you think the gentleman is offering a gang sign? Looks like a sideways “v for victory” sign. Churchill and Nixon used it all the time.

Thanks for this bit of good news in the midst of the blizzard of BS that constitutes daily news these days.

Great story. Thanks for posting.