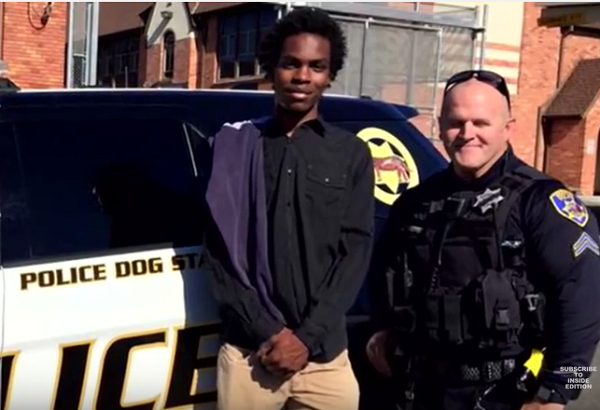 Jourdan Duncan, an 18-year-old from California, used to walk five miles to work . .  . until one evening he was picked up by Kirk Keffer, a Corporal with the Benicia Police Department, and given a ride home.  Keffer’s kindness didn’t stop there, and the Benicia PD set up a GoFundMe page for Duncan and have raised $40,000 to buy a car.

A California teen used to walk nearly five hours to and from work every day, but thanks to the kindness of local police officers and support from their community, he can now drive the distance.

Through a successful GoFundMe campaign started by the Benicia Police Department that raised more than $40,000 over the last four months, Jourdan Duncan, 18, was able to buy a used Volkswagen Passat to get to his job as a packaging line worker.

“They’re setting an example of what a good community is,” Duncan said. “I thought maybe that could be me — maybe I can have a change in our society and change in the community.”

Inside Edition details the initial incident:

Duncan recalls walking home late one night when he said he saw the flashing lights of a police car come up behind him.

“I said, ‘Uh-oh, I hope I didn’t do anything,'” Duncan told InsideEdition.com.

Corporal Kirk Keffer, with the Benicia Police Department, pulled up behind him, and waved him over.

“It’s dark; there’s no sidewalks,” Keffer said. “I asked him where he was walking to, and he says, ‘Home.'”

So, Keffer offered Duncan a ride.

Along the way, Duncan mentioned his car had broken down, and he had no other way to get to and from his job than to walk nearly five hours both ways.

“I had to start saving up little by little,” Duncan said, explaining that his paychecks went toward helping out his parents, paying tuition for college, and saving up for a new car. “It’s a pretty peaceful walk. I just put in my headphones, play my music.”

Keffer said he was impressed, and sympathetic to his cause.

“People use [a long commute] as an obstacle not to work,” Keffer said. “I wanted to make sure that he understood a good work ethic and dedication like that is going to be noticed and rewarded.”

Jourdan is an impressive 18 year old who walks almost 5 hours a day to and from work so he can raise money to fix his car and pay for college.  Jourdan also has aspirations of becoming a CHP officer one day.

Benicia PD Corporal Kirk Keffer met Jourdan walking alone one night and learned about his story.  Impressed with Jourdan’s work ethic and commitment to his dreams, Cpl. Keffer reached out to the Benicia Police Officers’ Association and asked if there was something they could do to help out this young man. The BPOA agreed to purchase a bicycle for Jourdan.

Since this meeting the Benicia Police Department and Police Officers’ Association has been approached by many community members from across the United States offering to donate to Jourdan and help him make his dreams a reality.  Jourdan and Cpl. Keffer’s story has gone viral and touched many across our Country.

There are so many negative stories coming out of CA that it’s refreshing to see one with a positive note. Thank you Officers for noticing someone in need! And as for Duncan; keep up the good work! With your attitude you’ll get where you want to be…