“I had people saying that I was a person of color that just wants to be white and I don’t act like people of color should.” 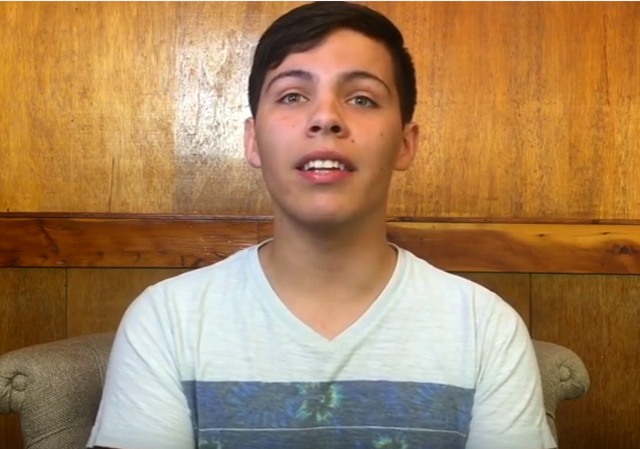 He’s also a progressive, yet he became the target of fellow students at Evergreen before the protests began this spring.

His story provides insight on how students at the school think and what led to the incident with Professor Bret Weinstein, which we covered in numerous posts, including Evergreen Prof. Bret Weinstein’s greatest alleged sin? Not suffering in silence.

This is the second time in recent months that an Evergreen student has spoken out about what happened. In an earlier post we documented the plight of one student:  “I was told that I couldn’t go into the room because I was white”

According to Douvia, he posted something on Facebook which was meant to point out the hypocrisy of social justice warrior students. They had written something about “students of color” and he rewrote it substituting with the word “white” to show the double standard. That simple action earned him scorn, confrontations, and even an order to stay away from certain other students.

The entire video is a little over 14 minutes long but worth your time. Watch it all below.

Video and interview by Benjamin Boyce:

Here are some excerpts from the interview:

One of the first questions is about the importance of race at Evergreen. Douvia responds:

Where do you think this attitude comes from? Douvia:

(3:33 mark) “Its from the faculty. I feel like students are afraid to talk like that because they know things that are OK and aren’t OK to say. But the faculty will actively come out with, you know, anti-this or anti-that type of speech rather than how we fix it. It fosters a really hateful mentality.”

Douvia describes being confronted by another student in the presence of his RA, who eventually joined the protests. He also says the RA approached him and said:

(8:27 mark) “What, you don’t like it when negros yell at you?” He goes on, “And then I get told that I am some sort of race traitor or that I hide behind my light skin privilege.”

He also remarks on the time during the protest when students held faculty members hostage.

(10:59 mark) “If this were any other school, if you literally held other people hostage, you would get in trouble because that’s breaking the law but they aren’t even getting in trouble for conduct violations. It doesn’t make sense to me.”

He also suggests that the students who participated in the protests did so to gain a feeling of moral superiority. All in all, it’s a fascinating interview which shows the culture of Evergreen State is worse than most people know.

When I lived in Wa state, Evergreen was referred to as “Mostly Black”. It was known as a dumping ground for students that couldn’t, even with affirmative action, make it elsewhere.

notamemberofanyorganizedpolicital in reply to Anchovy. | July 30, 2017 at 4:11 pm

Leftist media and academia are trying to destroy the values that make up America. What they’re doing is very dangerous and they need to be stopped.

Going the way of Missouri State.

Oops. I meant Univ. of Missouri.

Scientifically, white is the reflection of all colors.

But my skin color is not white, it’s a light brown. So technically, I am also a “person of color” but the SJW bigots refuse to call me that.

Pfft. No sympathy for being attracted to the sound of the word “progressive.”

A one-time acquaintance, a fully grown man, identifies as politically progressive because he likes Star Trek. And that’s all. He hasn’t a clue to the origin of the politics behind it, its history, its aims, nor all the ancillary politics he’s coerced into defending due to his attraction to the word itself. Put briefly, he’s a dope. While this kid has the excuse of being too young to know much about anything. We call this experience learning. While my acquaintance is too thick for that.

“His story provides insight on how students at the school think”
THEY DO NOT know to think, that is a HUGE part of the problem !

One thing I’ve noticed is that many of these stories from Evergreen College never mention the names of the professors doing all the fomenting of racism.

So here is one!
She is everything you might imagine.

My little brother put ‘pink and beige’ on a form where it said, ‘color.’ I thought that was lovely.

Everyone want to be what he not, what he not
Nobody happy with what he got, what he got
You function like a dummy with a new ventriloquist
Do you say nothing yourself?
Hanging like a thriller on the final twist
You know you’re getting stuck on the shelf
Come up to me with your “What did you say?”
And I’ll tell you straight in the eye