All hail the Israeli Nunchucks Hero who subdued terrorist

All hail the Israeli Nunchucks Hero who subdued terrorist 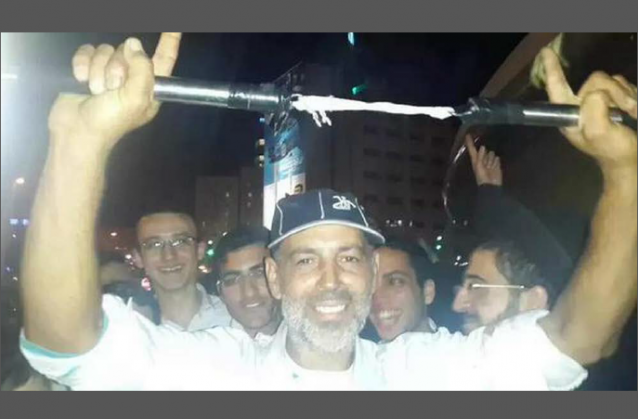 The bloodshed continues in Israel today, with additional stabbings by Palestinians, including by a 13-year old of an Israeli teenager in Jerusalem.

This is a very personal bloodletting inspired by incitement at home and abroad, and it even is tearing at the fabric of Israeli Arab society. The Muslim mayor of Nazareth lambasted Arab Knesset (parliament) members for inciting riots and ruining chances of peaceful coexistence.

But the story to emerge today will be how a terrorist stabbed a soldier and tried to steal his weapon.

The terrorist was stopped by Yair Ben-Shabat, an Israeli Seniors martial arts expert … with his nunchucks. 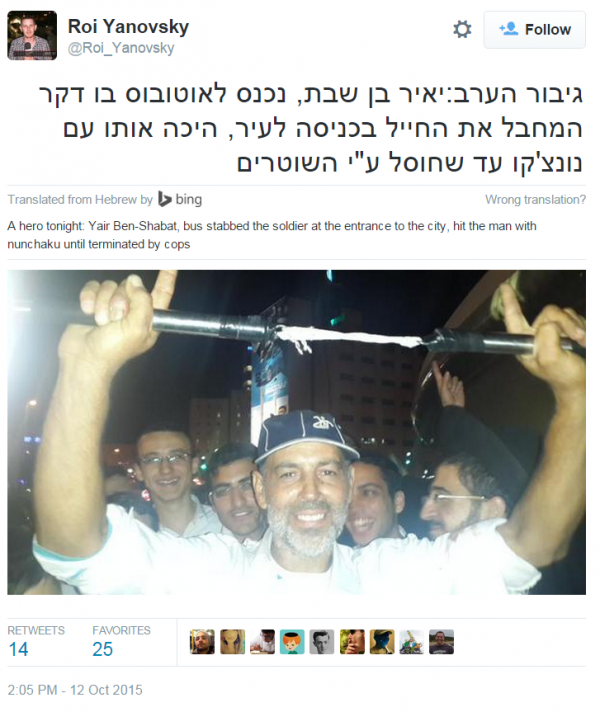 "I saw them struggling, so I took the nunchuks out of my bag and hit [the terrorist] where necessary so they could release the rifle."

Here he is telling his story on YNET News (Hebrew video at link):

A terrorist attempted to snatch a soldier’s weapon on a Jerusalem bus on Monday evening before another passenger tried to overpower him; he was ultimately shot dead by police….

According to police, the terrorist went to the back of the bus when he boarded and sat next to a soldier. He then stabbed him with a knife and attempted to snatch the gun.

A policeman on the bus ran towards the altercation and tried to pin the attacker to the floor….

Yair Ben Shabat, a passerby who helped overpower the terrorist, recounted the incident: “I jumped onto the bus and helped them struggle with the terrorist. I took nunchucks out and hit him where I had to for them to be able to pry loose the weapon he held.” 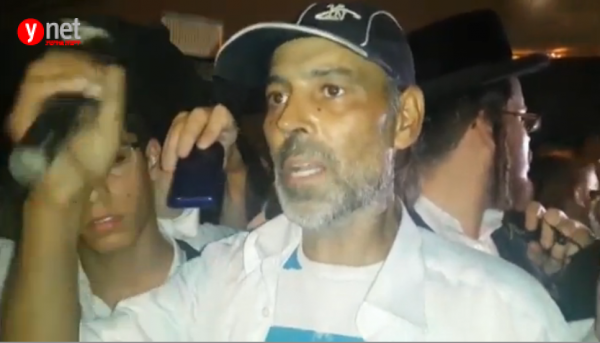 You can view the dead terrorist here and the bloody bus scene here.

Somewhere in the afterlife, Bruce Lee is smiling in approval.

In Texas, we call tem-are thangs by their ancient oriental name…

This is a very personal bloodletting inspired by incitement at home and abroad,

I don’t think this is, or can be, inspired by long distance incitement, but only by personal contact.

Although, I will add, hearing people in prominent positions and places, inside Israeli controlled territory and outside of it, who encourage this it and remain undisturbed and who continue to encourage it, does encourage people to go ahead and not back out.

But this is organized. It is not “inspired” by radio broadcasts or even sermons.

Sammy, standing squarely on the Koran of Islam, a “preacher” in Gaza offered great advice—if you’re a Muslim, that is.
http://www.theblaze.com/stories/2015/10/12/cut-them-into-body-parts-islamic-preacher-waves-knife-during-sermon-to-urge-palestinians-to-stab-jews/.

The TNK says “Thou shalt not kill.” The Koran and its preachers say “kill.”

This is no more “inspired” by speeches than the Kristallnacht in Germany n 1938 was.

The means of attack on Jews look more primitive than before, (no bombs and no firearms) but that’s political strategy.

Conservatives: Inspirational story of the day!
Liberals: Must do more background checks on Nunchuks! Close the Martial Arts Show loophole!

Possession of them is a felony in California.

Our overlords in most jurisdictions consider them “dangerous weapons” and their casual carry is illegal. (And there is no form of licensing that permits their carry. Which is kind of stupid, considering that in most of those jurisdictions you can get a concealed handgun permit. So you can carry a firearm, but not two sticks tied together. Effing brilliant. Some weapons, like switchblades, just have a bad reputation. Had one jump me the other day, but I subdued it.)

BTW, I was at one time very proficient with them, but have long preferred an escrima stick. A stick is a stick, and a hard thing to ban.

Gift this guy a new set of nunchuks with 3 inches of depleted uranium ends. Heavier than lead and harder than steel. It would be almost as effective as a mace. Or just give him a mace. I have a device consisting of a 10 inch, 16 tooth saw blade rigidly fastened to a long axe handle. I keep it near the front door in case I get caught short without my pistol. For most people it’s real scary looking.

A Muslim preacher in Gaza waved a knife during his sermon Friday to encourage Palestinians to step up stabbing attacks on Israelis, declaring they should “cut them into body parts.”

The Middle East Media Research Institute translated excerpts of the sermon by Sheikh Muhammad Sallah “Abu Rajab” at the Al-Abrar Mosque in Rafah.

“Oh men of the West Bank, next time, attack in a group of three, four, or five. Attack them in groups. Cut them into body parts,” the preacher said.

During parts of the sermon, the religious leader wildly flailed his knife, screaming angrily at the top of his lungs.

Addressing Palestinians in the West Bank, he explained how aspiring terrorists could reach a higher death toll.

“Form stabbing squads. We don’t want just a single stabber. Oh young men of the West Bank: Attack in threes and fours. Some should restrain the victim, while others attack him with axes and butcher knives,” the preacher instructed.

The Muslim leader framed the Arab-Israeli conflict in stark religious terms, with attackers described as “soldiers of the Prophet Muhammad.”

He made clear that it’s Jews and their heritage that Palestinians should target.

He described a blanket death sentence for Jews as a divine ruling.

“The Islamic military court has made the divined [sic] ruling: You will get nothing in our land except for slaughtering or stabbing,” he said.

Israeli Prime Minister Benjamin Netanyahu on Sunday blamed the dramatic increase in terrorist attacks on incitement from the Palestinian leadership in Gaza and the West Bank as well as Islamic Movement leaders among Israel’s Muslim citizens.