Yet another meeting with Russian Ambassador discovered, from the Senator who said she never met him.

Trump’s Twitter activity sucks the oxygen out of almost all other news.

So much so that nemesis Democratic Senator Claire McCaskill getting caught in another lie about never meeting the Russian Ambassador flew mostly under the media radar.

Back in March 2017, when Russia-mania was in full fury, Claire McCaskill attacked Jeff Sessions for allegedly (but not in reality) answering a confirmation hearing question inaccurately concerning meetings with the Russian Ambassador. The confusing compound question to Sessions focused on meeting the Ambassador as a campaign surrogate, which Sessions denied doing.

Sessions was excoriated by Democrats and the media, including McCaskill, for not mentioning two meetings with the Russian Ambassador in Sessions’ capacity as a Senator. One of those meetings was in a group setting at the Republican National Convention, when the Obama State Department brought numerous Ambassadors to the event. The second was in Sessions’ Senate office, accompanied by career staffers.

Yet McCaskill insisted that Sessions’ explanation that he met in his capacity as a Senator was implausible, because she never had done that.

But oops, McCaskill was caught misremembering her own meetings, as we reported, Dem Sen. Claire McCaskill “Lied” About Meeting With Russian Ambassador?

Recently confirmed Attorney General and former Senator Jeff Sessions became the target of what appear to be trumped-up charges that he lied about his involvement with Russia during confirmation hearings. The political media set, along with federally elected Democrats are having a heyday, demanding Sessions resign.

In response to the allegations against AG Sessions, McCaskill’s official account tweeted: 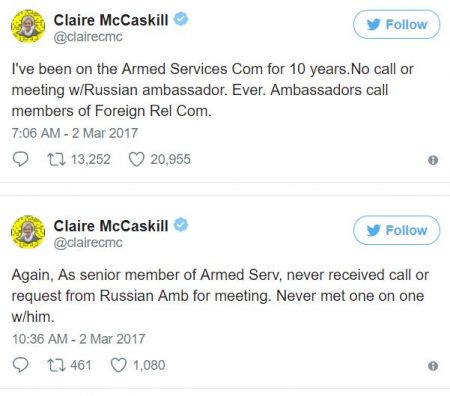 But there was a problem. McCaskill had tweeted about her prior meeting with the Russian Ambassador.

And there were photos. 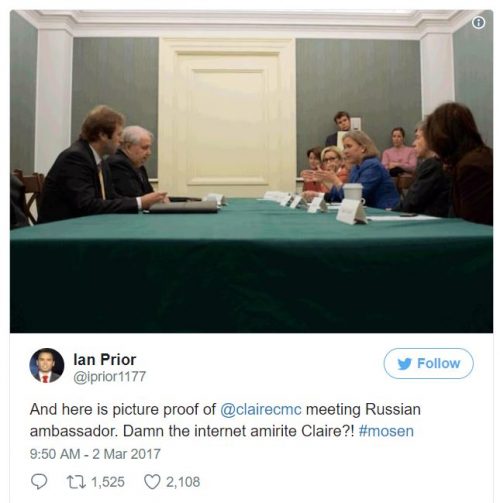 Now McCaskill has been caught again. Mediaite reports, Senator McCaskill Attended Reception at Home of Russian Ambassador She Claimed to Have Never Met:

But now, as CNN reports, McCaskill also attended a “black-tie reception” at the Russian ambassador’s home in Washington, D.C., in 2015. The event was apparently honoring former Congressman James Symington, a fellow Missouri Democrat.

And, as the Washington Free Beacon reports, her attendance at the dinner was accompanied by an $873 payment from an undisclosed foundation to the American-Russian Cultural Cooperation Foundation, where the ambassador serves as honorary chairman on the board of directors.

Seemingly caught giving contradictory accounts, McCaskill decided to deploy the popular, “I was taken out of context” defense.

Turns out the $873 payment was from a foundation set up in her husband’s name. To hide just such payments from public scrutiny, perhaps?

So, McCaskill lied as part of an attempt to discredit the Trump Administration.

Her stock just went up with the Dimocrat lefty loonies.

It’s another example of democrat Taqiya – Lying to further their agenda.

You really think the “media” would be all over this sans Trump tweets?

They WOULD be all over the story. With a pillow. To smother the life out of it before anyone noticed.

They would call it “covering” it.

How does she manage to get that “deer-caught-in-the-headlights-with-both-hooves-in-the-cookie-jar” look? I’ve never seen anything quite like it.

“Trump’s Twitter activity sucks the oxygen out of almost all other news.”

You talk as though, were it not for Trump’s outrageous twitter activities, CNN would be on this like stink on shit.

You know better than that…

A large swath of “conservatives” live in an imaginary world where politics used to be a game for gentlemen. And so they insist on making their support conditional on returning to that world.

No. Politics is and has always been a vicious full-contact sport. It is not a parlor game reserved for the genteel set with their perfect coifs, polished manners, and polished fingernails. If you want to play, get a helmet. Play to win or don’t play at all. Otherwise, stop complaining about the Republican Roadkill Party who can’t score even when they are the only team on the field. Scoring is “icky”. People get sweaty and dirty and use dirty words.

There is evil lurking behind those practiced good manners and permanent phony smiles. We all understand the crimes that are being committed in those ornate hallowed halls of government. Why do so may insist that evil can only be exposed so long as we are nice about it?

Trump is exposing the face of corruption for all to see and at great personal risk and sacrifice. It is his “icky” tweets that are keeping all of those corrupt heads exploding every single moment of every single day. It is keeping these criminals in a permanent state of panic. ENJOY IT! IT’S WORKING! KEEP DOING IT DONALD!

There are no preconditions for victory in an all-out war for all of the marbles. We can be nice after we win the biggest existential war in our history. We are lucky just to still be in the fight. Trump’s victory last year was a miraculous gift. Let’s not blow it by being squeamish.

Reagan was an extremely effective fighter. He’d spit on the cult of personality you typify.

Der Donald is not your nine-diminsional chess playing self-sacrificing hero. He’s a sick child with a serious personality disorder.

Whadya know. Our resident JoMika is back and still calling everybody else liars and morons. A lonely world of one. Mental illness on parade.

Well, I never called you either one in my post…a liar or moron.

But you just gave a very convincing demonstration that you are both.

Plus, you just dropped into the tribal ad hominem that seems so prevalent on these threads these days. It seems like it’s all you cultists have.

That, and the kind of delusional nonsense you waxed so rhapsodic about above.

Reagan would spit on the slavish cult of nevertrumpers.

And support Trump to the hilt.

Reagan had character and values (two of many things you lack), and HATED Collectivist frauds. Like your Great Goad Cheeto.

“two of many things you lack”

You no more speak for Reagan than I do. Reagan valued results above process. Reagans way was certainly different than Trumps, but then Reagan did not face the same situation we have today.

You’re the one aligning himself with the collectivists.

Oh, by the way, you told us President Trump would nominate his sister, or someone like her, for the supreme court.

Another of your BS and failed predictions.

Another of your lies.

Since Obama was first elected POTUS and so official leader of the Democrat Party, he led you to 1029 *NET* losses (so far) in Congress, State Legislatures/Governor’s offices and of course, Hillary’s hubris-fueled epic loss to Trump.

Obama’s ideas, policies and behaviors in office burned the Democrat Party to the ground. Yet the average street Leftist still worships him like a secular-PC-god…

Okay, Trump is a not a nine-dimensional chess player. But, Earth to you: He doesn’t have to be. All he needed was the guts to stand up the PC-Bullies of the Left – and he’s done that in grand fashion.

And that drives the hordes of useful-idiots on the Left absolutely barking mad.

Could not happen to a more deserving movement. One that is also dying was we speak.
Trump has shown zero fear of the Left’s politicians and owned corporate media conglomerates. He’s lived rent-free in the heads of Leftists for a long time now and it appears he’s moving his furniture in, painting the walls and hanging gaudy chandeliers…

Your own leaders led you into utter, grinding, defeat and you folks are in such a state of cognitive-dissonance, denial and PC-delusion stuff in your weak-egos by your leaders to hold them accountable for one of the great political collapses in US history.

No, check that, *THE* greatest political collapse in US history. If you were half smart you’d turn that PC-approve violence your side is famous for against your own leaders because they did this to you and got rich and richer doing it.

Up to about ten minutes ago in political time, Mr. Establishment was contributing to Hellary, Schumer, and other Deemocrats, and supporting them beyond contributions.

T-rump IS a Collectivist. He and Bernie have nearly identical trade policies. HE thinks its the governments right and power to control how businesses use their property, and who you and I can trade with.

He believes in Keynesian stimulus spending. He supports IvankaCare for family leave paid for private employers.

Where have you been that you don’t know this stuff?

Just because they are mentally slow does not mean they are not crooks.

Air Claire is a liar – and there is no way to take her “out of context” when she says she NEVER met the Ambassador.

Why Missouri keeps electing her…….. Well, all I have to do is look at VA, my state, and know the answer to that rhetorical question.

So what’s up with this “foundation”? A page ripped from the Bubba/Hiliary playbook?