“international businesses play a crucial role supporting occupations and settlement enterprises around the world,” but only Israel is blacklisted 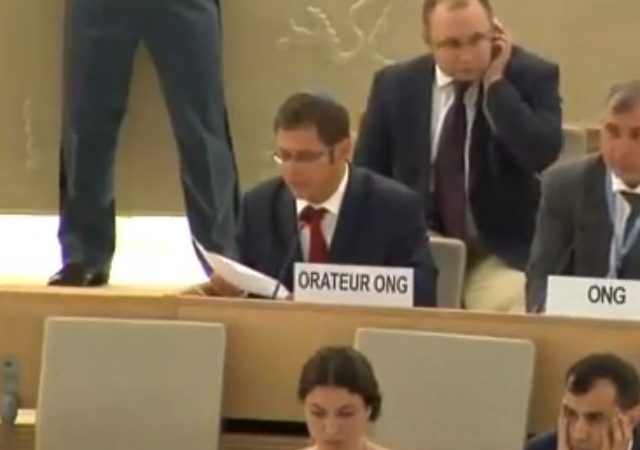 We previously reported how the UN Human Rights Council, with help from anti-Israel groups like Human Rights Watch, was preparing a blacklist of companies doing business in Israel’s “occupied territories” (i.e. what is commonly referred to as the West Bank and East Jerusalem).

This would, of necessity, become a de facto blacklist of almost all Israeli companies. The discussion was in the context of UN Security Resolutin 2334, the biased anti-Israel resolution the Obama administration orchestrated, UN Resolution 2334 advances the boycott of Israel:

Here is the provision I’m talking about in Resolution 2334 (pdf.):

5. Calls upon all States, bearing in mind paragraph 1 of this resolution, to distinguish, in their relevant dealings, between the territory of the State of Israel and the territories occupied since 1967;

Why is that significant?

Most of you don’t realize that the UN Human Rights Council, known for its obsession with attacking Israel, voted in March 2016 to create a blacklist of companies that do business, directly or indirectly, with any Israeli or Israeli business located over the 1949 armistice line….

The sweeping nature of the UNHRC resolution covers almost all Israeli businesses, which at least “indirectly” do business with settlements given the interwoven nature of the Israeli economy.

So this is a blacklist, effectively, of all companies doing business with Israel.

The UNHRC is recreating the Arab League anti-Israel boycott blacklist but with a UN imprimatur, something I addressed in my recent lecture, The REAL History of the BDS Movement.

NGO Monitor, an Israel-based human rights group that fights anti-Israel bias and anti-Semitism, presented a persuasive case that the proposed blacklist was both discriminatory and a subterfuge to economic war on Israel (pdf. Report here). Among its conclusions:

The UNHRC’s discriminatory blacklist operates from the premise that business in occupied territory is “illegal settlement activity” and is barred by international law. In fact, there is no such prohibition and almost every country engages in and/or facilitates business activities in settlements in situations of occupation throughout the globe.

The UNHRC blacklist violates international human rights law and UNHRC guidelines by promoting religious and national origin discrimination, and supporting antisemitic BDS. There are more than a dozen situations of military occupation and settlement activity currently in place around the globe. Yet, as part of the UNHRC’s ongoing anti-Israel obsession and immoral double standards, Israel alone is singled out.

As a result of the NGO Monitor report, the blacklist process was delayed from March 2017 until December 2017. The High Commissioner for Human Rights based his request for the delay on the issues related to due process raised in our submission.

Today NGO Monitor took its research to the UN Headquarters in Geneva, releasing a new report (full embed at bottom of post) and statement from law professor Eugene Kontorovich. You may recall Prof. Kontorovich’s brilliant presentation The Legal Case for Israel, which is required viewing for anyone serious about countering anti-Israel legal propaganda. 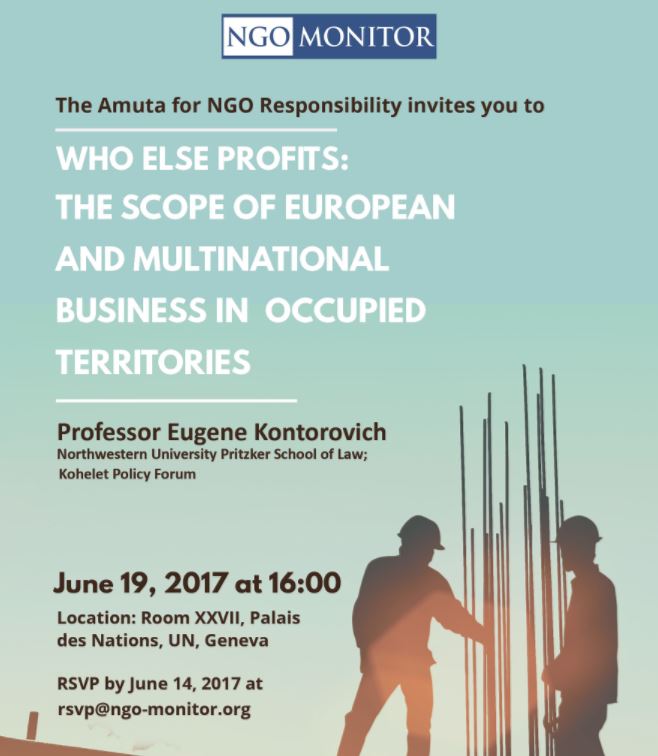 “The extensive business activity in occupied territory around the world, which goes unmentioned by the UN and NGOs, demonstrates the utter indifference to human rights that are not tied to the UN’s obsessive and politicized focus on Israel,” said Anne Herzberg, Legal Advisor at NGO Monitor. “International law does not prohibit businesses from operating in occupied territories, yet UN bureaucracy is again mobilized to deliberately target Israel.”

To highlight the double standards, NGO Monitor is hosting Professor Eugene Kontorovich, Professor at Northwestern University School of Law and Head of the International Law Department at the Kohelet Policy Forum, to brief the Council, journalists, and diplomats on a new study, “Who Else Profits: The Scope of European and Multinational Business in the Occupied Territories.” The report reveals that business activity in occupied territories is ubiquitous, and involves some of world’s largest industrial, financial services, and other major publicly traded companies. Such companies include Siemens, Credit Agricole, BNP Paribas, Satander, Vodafone, Renault, and Turkish Airlines, to take just a few examples. 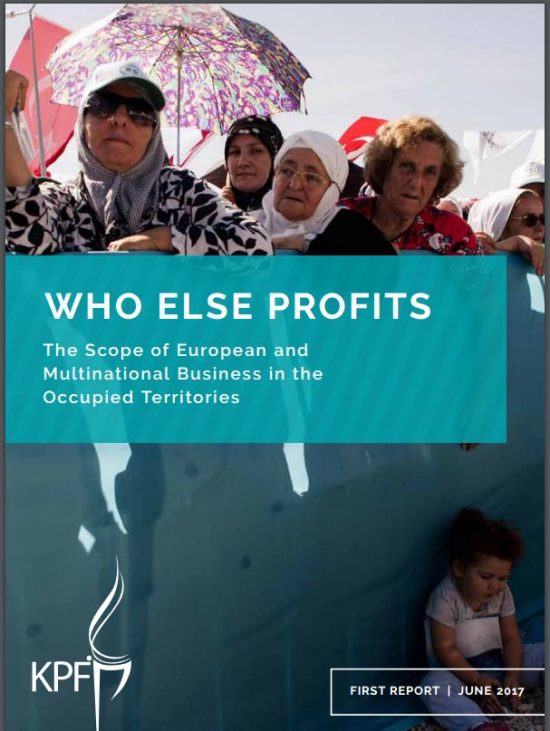 Here is the video of Prof. Kontorovich’s statement:

Mr. President, thank you. I am Eugene Kontorovich, a professor of international law at Northwestern University and the head of the International Law Department at the Kohelet Policy Forum.

Today, I present to the Council a new research study entitled “Who Else Profits: The Scope of European and Multinational Business in the Occupied Territories.” Our report puts a global perspective on Council’s blacklist of companies doing business with Israel.

The study reveals that international businesses play a crucial role supporting occupations and settlement enterprises around the world, such as Western Sahara, Northern Cyprus, Nagorno-Karabakh, and Crimea. Our non-exhaustive report identifies 44 major companies, from countries including Sweden, Switzerland, Germany, France.

Yet the Council has never condemned any this business activity. Our research shows that the activity the Council treats as criminal when Israel is involved is regarded as unremarkable anywhere else.

The Council’s Israel blacklist is based on a false premise – that businesses violate human rights when they work in an occupied territory. Our report reveals that the Council itself does not really believe that. Indeed, two of the countries that most depend on business support for their settlement enterprises, Turkey and Morocco, both voted for Res. 31/36. The blacklist effort is not about universal principles of law, but rather a specific effort to cause economic harm to Israel.

Our report shows that the there is nothing improper about the activity the Council is making a “database” of. However, Mr. President, the Council’s database will also have unintended effects: it will create a precedent whereby peoples living under occupations worldwide will bring charges against the companies we identify. The Council wants to confine this to Israel, but law knows no borders.

Our new study shows hat the biggest multinational companies in the world do significant business in occupied territories around the world. Neither their home countries, nor the UNHRC, believes such business is illegal. Their “database” project is an effort to create a unique set of legal rules for Israel, that even the UNHRC does not believe in. Our report shows that the Human Rights Council has abandoned its mandate of upholding rights based on universal standards. Amb. Haley has given the Council a warning, and our report shows that if it proceeds with its blacklist of Israeli companies, the U.S. must stop wasting its taxpayer dollars on this institution, and quit.

There are so many legal myths that are used against Israel. Those myths are compounded by selective international application whereby Israel, and Israel alone, is held to standards not enforced on any other country by international organizations.

This is not mere legal formality or niceties. As I have pointed out many times, this attempt to dehumanize and delegitimize Israel counts on the discriminatory application of seemingly neutral and worthy principles.

Can someone find Konigsberg on a current map of Europe. Please, it’s important.