Utah: Quiznos Employee Thwarts an Armed Robbery With Her Gun

Utah: Quiznos Employee Thwarts an Armed Robbery With Her Gun 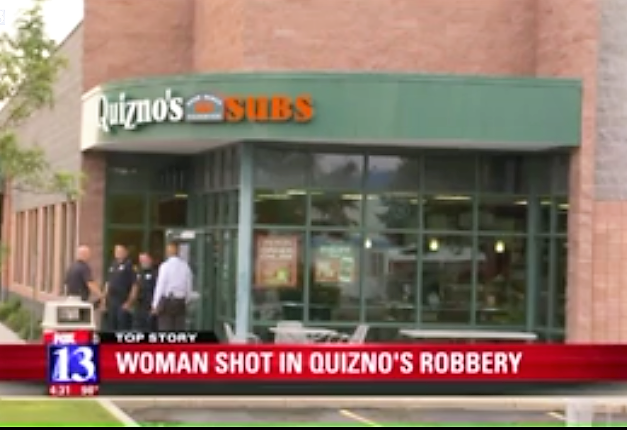 A Quiznos employee thwarted an armed robbery by firing warning shots with her firearm.  She wounded one of the suspects, and the other two fled the scene.

A Quiznos employee in Salt Lake City, UT thwarted an armed robbery on Tuesday with her use of a firearm.

Three people — one female and two males — entered the Quiznos with two firearms. One of the robbers was trying to procure money from the cash register from one of the two employees there. The second employee was in the back, where she attempted to block the robbers from entering by using her body to push on the door.

Eventually, the employee pulled out a gun and fired it multiple times. One of the shots struck the female robber in the neck, prompting the other two robbers to flee the scene with money stolen from the register. The female suspect is currently in serious condition at the hospital and her identity has not yet been released.

“We’re talking about a situation where they’re locking the door, they’re forcing their way into the back room; it’s a takeover-style robbery,” said Wilking. “It’s not something that we see very often, much more dangerous for everybody involved.”

Therefore, the female employee’s use of a gun in self-defense prevented a terrifying situation from escalating further.

The female employee’s identity has not been released.

Hit in the neck? Wow, that’s some warning shot. I mean, sure, you have to get their attention first, but still …

I HATE the entire CONCEPT of warning shots.

In most jurisdictions, you can only use a personal fire-arm for self-defence in extremis.

It will be pretty hard to argue (later, in court) that there was no better alternative to using that fire-arm if you have time to fire a warning shot.

If I were to draw a concealed fire-arm in a similar situation, it would be because I was facing clear and imminent danger of death or severe injury. Do NOT expect me to fire a warning shot or shots – I will be aiming (pardon the pun) to stop the threat. Simply scaring the gun-waving attacker is not a good idea.

Right. You’re allowed to use a firearm to defend yourself in the last extreme: against an immediate, grave threat.

It doesn’t take much for a prosecutor to argue that if you had time to fire a warning shot, then you weren’t in immediate danger, and were not justified in using your firearm at all.

I don’t think it’s right, but it is how the law could be (and in some cases, has been) interpreted, so it’s something you have to consider before carrying a defensive firearm. Things being as they are, I have to strongly recommend against firing warning shots.

As LI’s Andrew Branca would tell you, it depends on the self-defense law of your state, county, and city in some cases.

Here in TX, there is no duty to retreat; if you’re in a place you are allowed to be, doing something legal, you can fire warning shots, or use deadly force to protect yourself and others.

TX is unique in that there’s another category loosening the standards if the illegal activity takes place “in the nighttime.”

IANAL, nor do I play one on TV or even this blog.

Unless you’re out in the wilderness with no one around for miles, there are very few occasions when a warning shot would be useful, and probably fewer when it would be advisable.. If you need to shoot someone, shoot him; if you don’t, keep your finger off the trigger.

Under stress and in a fast-moving situation, most people can’t hit a target just ten 10 from them.

But the technical term for that is a “miss”—a “warning shot” is a different animal.

Without knowing more details, it’s hard to tell if she was firing warning shots or simply missed. This type of takeover robbery, though, rarely ends well for the victims.

I doubt there was any warning shot. Tom was just making a joke.

What’s the over/under for Quizno’s firing her?

All shots are warning shots.

True. Some warnings are just stronger than others.

Hmm… Don’t the libs claim that self-defense with a firearm is ineffective?

Yep. According to liberals, everyone knows that when she tried to use her firearm in self-defense, the robbers just took it from her and used it against her.

Thus, this whole report must be NRA-sponsored revisionist history. 😉

(In all seriousness, though, liberals would rather she’d been robbed/raped/beaten/murdered than successfully defended herself and her coworker with a gun. As a victim, she’s useful to them, as a statistic if nothing else; as a successful defender, she’s not.)

Law-enforcement officers are generally prohibited from firing warning shots, because they often wind up in unfortunate places.

This “take-over” type of robbery often ends up with one or all of the victims dead. The employee who pulled out her gun and stopped the robbery showed foresight and courage. I hope Quizno’s doesn’t show their appreciation by firing her. (No good deed goes unpunished.)

The only “fortunate” place for a bullet to wind up is in an assailant’s body. I wonder if people who advocate warning shots ever give a thought as to where the bullets go. Do they think they vaporize into thin air? Fly high in the sky and then gently touch down? I doubt they think that far ahead.