“There’s nothing there you can do…” 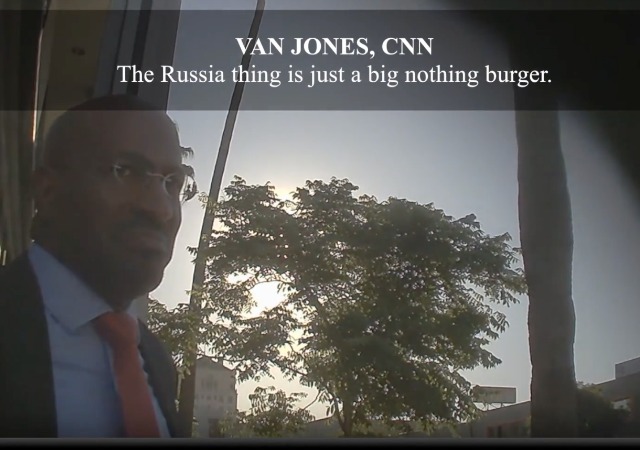 James O’Keefe’s Project Veritas dropped the second video of a series to expose the media’s bias against President Donald Trump.

This video catches CNN’s Van Jones, one of the more prominent leftist contributors, admitting the Trump-Russia narrative is mostly a “nothing burger.” Yesterday’s video showed a CNN producer calling the narrative “mostly bullsh*t.” 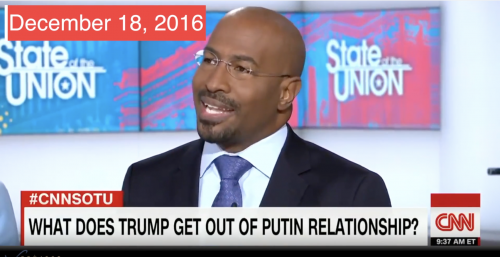 This is quite a turnaround for Jones. In the screenshot above, Jones said:

Other presidents tried to say nice things about the Russians and other, you know, warm things in their heart and they love…not in the face of an active attack on the country.

O’Keefe and the video do not tell us when the Project Veritas investigator made the recording, but it appears something has changed in Van Jones.

The investigator tells Jones the two met in Palm Springs a few years ago, which leads to a warm greeting between the two men.

Then the investigator asked Jones for his opinion on the “whole Russia thing.” This is how Jones responded: 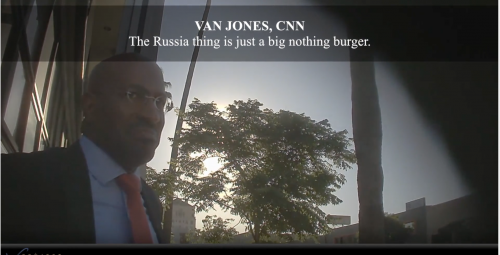 “Really?” the investigator answered back in a shocked voice. Jones responds, “There’s nothing there you can do..” before trailing off as a friend interrupts the two.

In the video yesterday, CNN producer John Bonifield told the same Project Veritas investigator that the Trump-Russia narrative is “mostly bullsh*t” and he is “very cynical” about the news cycle. He pointed out he has colleagues that share his opinion, but didn’t specify which ones.

I wish these CNN guys would make up their minds…
Is the Trump/Russia thing bullshit, or a nothingburger?

it’s a nothingburger made out of 100% bullshit.

burgers need to be ‘beef (bullshit) by products’ from the ClintonNudesNetwork.

burgers need to be ‘beef (bullshit) by products’ from the ClintonNudesNetwork.

don’t know if this got posted (sorry if duplicate)

Clearly, you can say that again.

well, he *is* an expert on nothing…

They apparently met in Palm Springs years ago.

I think you misread…I did too at first. How would Van Jones be talking about Russia years ago???

No, the investigator told Van Jones that they (he and Van) had met years ago in order to get him to drop his guard.

Can I get my Nothing Burger with an extra side of Lies please?

Does anyone remember the web forum or Listserv used by “journalists” in the 2008 timeframe to confer on how to help Obama and hurt McCain that became public? Team Trump should be hitting on it to show the long history of “journalists” conspiring to carry the water for the DNC.

Trump should refer to CNN as “DNCNN.”

If memory serves you are thinking of JournoList.

Thanks, it was JournOlist indeed, run by Ezra Klein. Breitbart published articles about it, so one would think Bannon would be aware of it and add it to Donnie’s tools to cudgel the leftist media and remind the public.

I want the Nothingburger Royale with cheese, please.

It must be very confusing for an old communist like Jones to cope with the new pravda that “We’ve always been at war with Oceania Russia”.

Somehow I think Orwell would not be flattered by your quoting him. You are a Trump supporter? Are we getting healthcare that is better, cheaper and will cover all?

Perhaps you ought to wait for the Mueller Report. The FBI must think it is a something burger.

“Health care” that “covers all” is a utopian socialist concept. Covering all in reality means covering no one well at a high price, and that’s the problem with your incessant witless platitudes. There are countries trying your way and it isn’t working out that well. You can certainly head there though and live with it if you’d like, instead of taking a bunch of ethically-challenged propaganda “journalists” at their word.

Hey look the troll crawled out from under his rock!

Did you notice (like the rest of us have) that the Wind Has Changed? (Widfara called it)

Ossoff Lost; Trump won on his travel ban; Russia narrative is Dead; CNN is on the ropes; Morning Joe is Despondent; but we’re still not sick of all of this winning!

Stick around, it’s always fun to have some chump around that everyone can laugh at!

I am a Trump supporter?! ROFL. You’re new here, aren’t you?

“O’Keefe and the video do not tell us when the Project Veritas investigator made the recording, but it appears something has changed in Van Jones.”

I don’t know if it was added post-recording (I don’t see signs of editing, but what do I know?), but the signage towards the beginning of the videos (around the 16 second mark) says “June 26, 2017”. I’m assuming it’s a real date/time ticker, and the video was recorded this Monday.

To his credit, he was one of the early Democrats to understand why Clinton lost.

Really Shaggy? Did you not hear him call a vote for Trump a “whitelash”?

This is lie mixed with the “truth” of why Hillary lost in his on-air segment a day later. Don’t give him the credibility of one ignoring the other…follow the pattern.

He does not deserve credit in total, but he did recognize that people did not vote for Clinton because of the poor economy and willful, some may say: progressive, disregard.

James O’Keefe – Destroying liberals with their own words.

yeah – when trollbaby says “say no more” he means “this is a guy who whips our lib asses over and over again and we don’t have the faintest idea what to do about him!!!”

If O’Keefe’s story is weak, feel free to explain why. If his story isn’t weak, you are obliged (assuming you have any ethics) to acknowledge the fact.

Instead you just shrug “O’Keef. As if.” Weak tea indeed.